President Donald Trump is incredibly patriotic. He loves the troops, apple pie, winning, and pro-America songs like the national anthem... 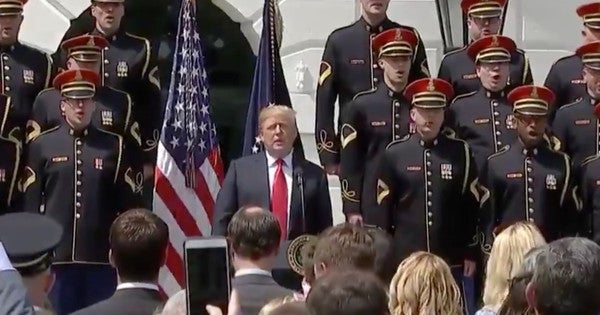 President Donald Trump is incredibly patriotic. He loves the troops, apple pie, winning, and pro-America songs like the national anthem and others.

So it's no surprise that our president would stick it to those traitorous, kneeling-during-the-anthem Philadelphia Eagles players, by reciting the six total lines one needs to memorize in order to sing God Bless America.

Now you might be saying to yourself, Paul, it looks like the president doesn't really know the lyrics to the song. It seems like he was mumbling along and only knew a couple of words here or there. But you would be incorrect. The president was actually trying to take the spotlight off of himself and put it on the Army Chorus—the troops, God bless the troops!—because he is just so humble.

Still, some in the liberal media made fun of our dear president in a truly disrespectful and terrible way. They should be ashamed of doing this “bad lip reading” version of Trump's singing, which is an affront to the cherished office of the presidency, which Donald Trump respects and admires every single day.