President Donald Trump Should Apologize For This (But He Won’t)

You've probably seen it by now, but President Donald Trump's Memorial Day tweet is one for the history books, insofar... 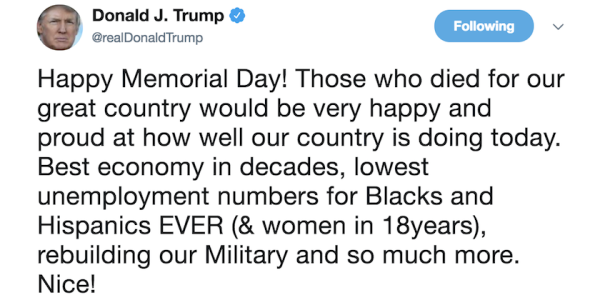 You've probably seen it by now, but President Donald Trump's Memorial Day tweet is one for the history books, insofar as it will forever be known as the worst sentiment to express on such a solemn day.

“Happy Memorial Day! Those who died for our great country would be very happy and proud at how well our country is doing today. Best economy in decades, lowest unemployment numbers for Blacks and Hispanics EVER (& women in 18years), rebuilding our Military and so much more. Nice!”

He gave a more appropriate speech at Arlington National Cemetery later that day, where he laid a wreath at the Tomb of the Unknowns, but the tweet remains.

It shouldn't. It should be deleted and an apology should be offered.

An explanation shouldn't be required on how this message is deeply offensive and self-centered, but at least some of the president's supporters feel criticism of the tweet was a “childish backlash” from the left — even though critiques came from people like Bill Kristol, Republican and editor-at-large of The Weekly Standard, Jay Nordlinger, a senior editor at the conservative National Review, and conservative commentator Ben Shapiro.

To the far right, it seems, Trump can never do anything wrong. And the president himself, with the tweet remaining online with no expression of apology or guilt after the backlash, seems to agree there's nothing wrong, either.

Let's do a thought experiment. Pretend that President Hillary Clinton wrote such a self-congratulatory message for Memorial Day, lauding herself and speaking for all our nation's fallen veterans, and how they would be so happy about everything that has happened since her term of office began.

Or how about this: Keep it a message from Trump, but just change the occasion to the September 11th attacks. Happy 9/11 Day! Those who died for our great country would be very happy and proud of how well our country is doing today. Can you work up the nerve to recognize that what the president said was absolutely horrendous?

If you can, you might actually be a decent human being capable of recognizing what is a solemn day for remembering those who paid the ultimate sacrifice. If you can't, you should probably pull the Make America Great Again hat up, since it's covering your eyes.

I recognize that asking Trump to apologize at this point is an exercise in futility. He made a mockery of all those who endured captivity and torture in his attack on Sen. John McCain and he has disrespected multiple Gold Star families, with no regrets.

But I'm not giving up on remembering a time when a president messed up, and later admitted so to the American people. It wasn't a sign of weakness. It was a sign of respect and integrity toward the 330 million Americans he leads.

A president making Memorial Day all about himself is not normal, and at least some of us need to actually say so.

It's another historic and sad low. And, despite Trump's nature of no apologies and counterattacks, it will never be acceptable.