While addressing the press at the White House Rose Garden on Oct. 16, President Trump inaccurately claimed that he is... 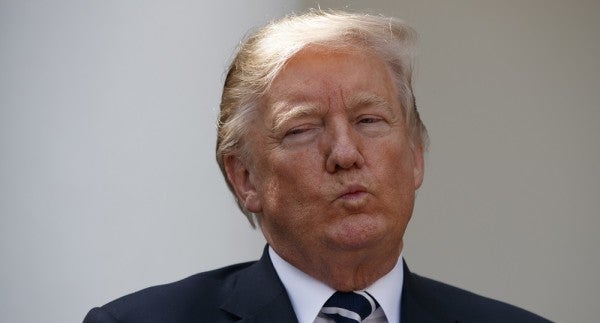 While addressing the press at the White House Rose Garden on Oct. 16, President Trump inaccurately claimed that he is one of the few commanders-in-chief who calls the families of fallen service members to offer condolences.

Trump claims that Obama and “most” other presidents “didn’t make calls” to families of fallen American soldiers. pic.twitter.com/TQJtkbyc1s

When pressed by reporters, Trump quickly walked back his claim.

Pressed on this claim, Trump says: "I don't know if he did… I was told that he didn't often. A lot of presidents don't." pic.twitter.com/0f2bUxsaF2

Trump’s claim was in response to questions about his silence following an Oct. 4 daylight ambush in a rugged border region of Niger that left four U.S. Army soldiers killed — the deadliest single attack on U.S. combat troops since Trump took office, according to New York Daily News.

In response to a growing chorus of questions at the press conference, Trump added that he was “going to call” the parents and families of the fallen soldiers, and that he wrote “personal letters” that had been sent, or would be sent.

“The toughest calls I have to make, are the calls where this happens — soldiers are killed,” Trump said. “It’s a very difficult thing. It gets to a point where you make four or five in a day, and that’s a very very tough day.”

12 days after it was announced soldiers were killed in Niger, Trump says "I will at some point during the period of time call the parents." pic.twitter.com/vPh85JNF4x

Trump’s suggestion that his predecessors rarely called the families of the fallen, quickly drew the ire of many on social media, including Alyssa Mastromonaco, a former White House deputy chief of staff in the Obama administration.

that's a fucking lie. to say president obama (or past presidents) didn't call the family members of soldiers KIA – he's a deranged animal.

In addition to making phone calls, and writing letters, Trump’s most immediate predecessors, Barack Obama and George W. Bush, frequently met with families of fallen troops to offer their condolences.

While in office, and between numerous trips to Walter Reed National Military Medical Center, Obama made two high-profile visits to Dover Air Force Base in Delaware to witness dignified transfers — the arrival of fallen troops — rendering respects to 15 fallen service members in 2009, according to the New York Daily News. Obama returned two years later to meet with 250 relatives of 30 service members killed in Afghanistan when their helicopter was shot down.

President Bush, for his part, wrote thousands of letters, made calls, and met with more than 500 families of servicemen and women killed in action, often privately, according to a December 2008 report by the Washington Times. And those face-to-face meetings with parents mourning the loss of a child were rarely easy.

Rather than push back, as Trump did to gold star parents Khizr and Ghazala Khan after the pair levied criticisms at the then-nominee in July 2016, Bush accepted Sheehan’s comments, holding an impromptu press conference afterward saying “I grieve for every death,” Bush said. “It breaks my heart to think about a family weeping over the loss of a loved one.”

Given Trump’s propensity for social media — and his recent silence on there, too — even a tweet would do.