Sebastian Junger has a message for lawmakers: the partisan warring of politicians in Washington DC is hurting the American military... 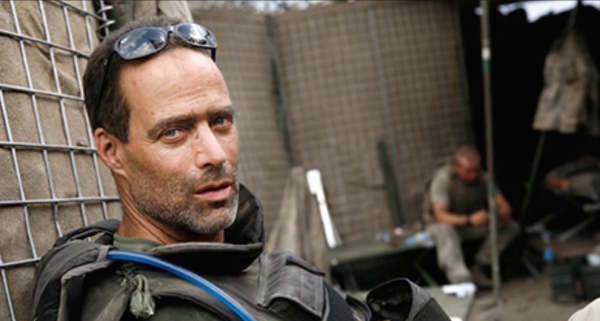 Sebastian Junger has a message for lawmakers: the partisan warring of politicians in Washington DC is hurting the American military more than they realize.

“Unity is all soldiers have when they face the enemy, and you must do everything in your power to make sure that it is not taken away from them,” the noted war journalist and author, who has written and directed extensively on war, told members of the House Veterans Affairs Committee during a hearing on post-traumatic stress disorder on June 7.

Junger used the opportunity to rail against the toxic influence of partisan politics among the armed forces.

“When it became fashionable after the election for some of my fellow Democrats to declare that Donald Trump was not their president, they put all of our soldiers at risk of moral injury,” he told lawmakers. “In order for soldiers to avoid something called ‘moral injury,’ they have to believe they are fighting for a just cause. And that just cause can only reside in a nation that truly believes in itself as an enduring entity.”

The issue isn’t just about the unusual nature of the Trump presidency, or Democrats’ resistance to it. “When Donald Trump charged repeatedly that Barack Obama [ …] was not even an American citizen, he surely demoralized many soldiers who were fighting under orders from that White House,” he said.

Junger, whose career as a war reporter began covering the Kosovo genocide in the 1990s, most recently penned a book called “Tribe” in which he wrote about the fractionalized America that troops face when they return home.

“For the sake of our military personnel, if not for the sake of our democracy, such statements should be quickly and forcefully repudiated by the offending political party,” Junger said. “If that is not realistic, at least this committee — which is charged with overseeing the welfare of our servicemen and women — should issue a bipartisan statement rejecting such rhetorical attacks on our national unity.”

The military, which serves the president as its commander-in-chief, has become increasingly politicized in recent years.The Center for New American Security reported a trend of more politicization of the military’s ranks by observing speeches given by retired generals at both Republican and Democratic national conventions in 2016. What’s more, a study by the National Defense University found that more military personnel are sharing their political views on social media.

After surveying 500 West Point cadets and active duty officers, the report found that 75% of respondent said that they had seen their contemporaries shared political links on their personal social media accounts on sites like Facebook and Twitter.

In “Tribe,” Junger writes, “Soldiers all but ignore differences of race, religion and politics within their platoon.”