On Jan. 29, as a woman was idly filming a convoy of military vehicles driving down a Louisville, Kentucky highway,... 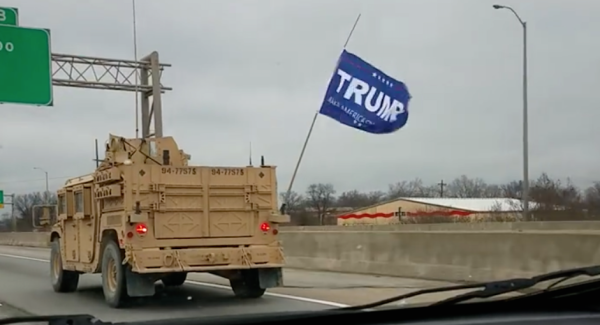 On Jan. 29, as a woman was idly filming a convoy of military vehicles driving down a Louisville, Kentucky highway, one had an unexpected flag. As the lead vehicle passed, the woman was caught off-guard by a blue flag emblazoned with Trump’s name flying off the back of the rig.

“The flag shown in the video was unauthorized,” Maxwell added.

Flying this particular flag is not permitted as partisan politics are strictly prohibited under DoD directive 1344.10.

A Department of Defense spokesman said on Jan. 31 that he believed the trucks to be military surplus belonging to private citizens, USA Today reported. However, military transport experts suggested they were equipped in a way that wouldn’t be seen on decommissioned vehicles. Instead, they likely belong to the Navy SEALs or other special operations forces.

“Defense Department and Navy regulations prescribe flags and pennants that may be displayed as well as the manner of display,” Maxwell said. “The flag shown in the video was unauthorized.”

As of now, the military officials are looking to determine if the incident can be linked to misconduct.