On the afternoon of Feb. 1, President Donald Trump made an unannounced trip to Dover Air Force Base in Delaware... 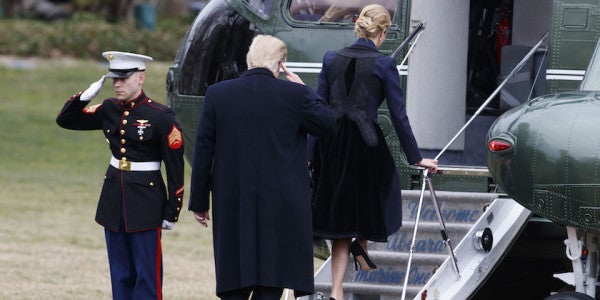 On the afternoon of Feb. 1, President Donald Trump made an unannounced trip to Dover Air Force Base in Delaware to receive the remains of a fallen U.S. commando, the first to die under his watch. Chief Petty Officer William “Ryan” Owens, a 36-year-old Navy SEAL, was killed in Yemen over the weekend during a daring nighttime raid that left three other operators wounded.

For years, Dover Air Force Base was, to some degree, off the record. Under the Bush administration, the media wasn’t allowed to be present at the base when a fallen service member received a dignified transfer, a ceremonial unloading of the casket from an aircraft to a vehicle destined for a mortuary affairs facility. That changed in 2009, when Obama lifted the media ban and paid a visit to Dover himself. Thousands of fallen service members have passed through the base since.

Owens is the latest casualty in the War on Terror and the first service member to die in combat since Trump became president. He’s also the first American service member to be killed in action in Yemen since the country plunged into a bloody civil war between rebels and government forces, creating a sanctuary for terrorist groups like ISIS and al Qaeda. The raid, carried out by SEAL Team 6 on Jan. 29, was called a success by Trump, who lauded the commandos for killing “14 members and “capturing important intelligence that will assist the US in preventing terrorism against citizens and people around the world.”

But the operation, which has been widely viewed as evidence of Trump’s commitment to ramping up the fight against radical Islam, also drew criticism after reports that women and children were among the dead began to surface. An eight-year-old girl, Nawar al-Awlaki, an American citizen and the daughter of Anwar al-Awlaki, who was killed by a US drone strike in 2011, was killed in the raid, according to her family. The U.S. military has not yet acknowledged her death or the deaths of any other civilians who allegedly died in the raid, which culminated in a nearly hourlong firefight.

Owens hailed from Peoria, Illinois. In interviews with the Chicago Tribune, childhood friends described him as having been a popular and incredibly driven high school athlete who decided to become a SEAL at an early age and fulfilled that dream soon after joining high school in the late 1990s. By the time Owens arrived in Yemen he was a veteran of multiple combat deployments and a recipient of three Bronze Stars.

“Ryan gave his full measure for our nation, and in performing his duty, he upheld the noblest standard of military service,” Secretary of Defense James Mattis said in a statement released on Jan. 30. “The United States would not long exist were it not for the selfless commitment of such warriors. I thank our gallant troops and their families for their dedication to protecting this nation, and I pass our respects to Ryan’s family in this most difficult time.”