CYBERCOM Just Got A Major Pentagon Promotion From The President

Doing “the cyber” got a boost at the Pentagon today. In a highly anticipated move, President Donald Trump announced on... 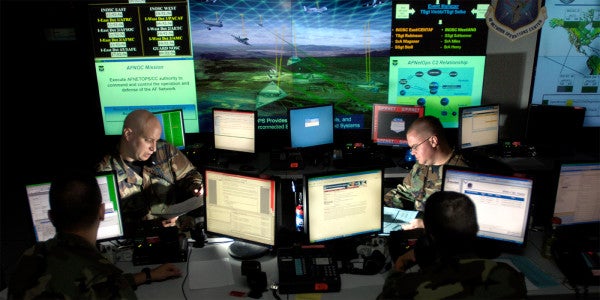 Doing “the cyber” got a boost at the Pentagon today.

In a highly anticipated move, President Donald Trump announced on Aug. 18 that the U.S. Cyber Command would be elevated to the status of a “unified combatant command,” putting it on a par with the likes of Central Command and Special Operations Command.

“The elevation of United States Cyber Command demonstrates our increased resolve against cyberspace threats and will help reassure our allies and partners and deter our adversaries,” Trump said in a statement.

The move wasn’t a huge surprise; CYBERCOM had also recently announced it was organizing its first “industry day” to meet eager vendors and contractors. But its elevation by the president is the latest product of years of debates over how the United States should structure, support, and prioritize its cybersecurity operations — debates that will probably intensify now, rather than resolve themselves.

For example, Trump added in his statement that Defense Secretary James Mattis was looking into “the possibility of separating United States Cyber Command from the National Security Agency.” Since its creation in 2009, CYBERCOM has lived under the NSA’s roof at Fort Meade, depended on NSA’s resources, and shared its commander with NSA, as well: The commanding officer of CYBERCOM has historically been the “dual hatted” NSA director.

There are plenty of pros and cons to a CYBERCOM-NSA split, most of which boil down to bureaucratic wranglings over who’s responsible for what and when. But one issue that’s helped spur the divorce talk is the evolution of different missions for the two agencies. NSA has historically operated as a “collection” entity, stealthily intercepting communications and hoovering up all the details in them. CYBERCOM, on the other hand, has been trying its hand as a “disruption” entity, taking offensive actions against hackers and enemies. It’s hard to run both kinds of ops on a single target through a single point of entry.

NSA–CyberCom separation (TBD) is urged by those who see digital espionage and cyber combat as irreconcilable missions for one organization.

Then again, without NSA resources, it’s hard right now for CYBERCOM to run any kind of ops. Whether the command’s elevation will translate into needed bucks and gear remains to be seen. But it’s likely going to need serious help from a paralyzed Congress to make that happen. And while Trump is supportive today — he said that elevating CYBERCOM would “also ensure that critical cyberspace operations are adequately funded” — it’s worth noting that the president has some cybersecurity foibles of his own, and makes enemies fast.

Putin & I discussed forming an impenetrable Cyber Security unit so that election hacking, & many other negative things, will be guarded..

Can CYBERCOM successfully navigate these hazardous waters? Answering that would require an astrologer, not a hacker.