Could Cyber Geeks Make It Into The Marines Without Going To Boot Camp?

Marine Corps at mid-career levels may be back on the table — and with it, an added caveat that’s sure... 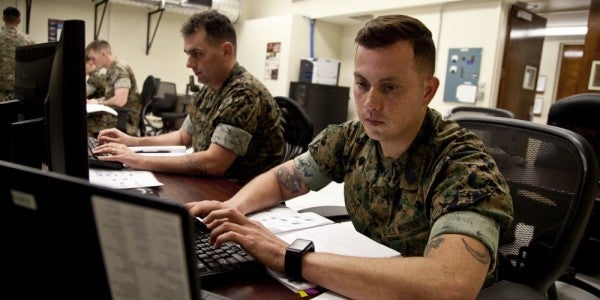 Marine Corps at mid-career levels may be back on the table — and with it, an added caveat that’s sure to rustle the jimmies of many Marines still serving: These cyber specialists might skip boot camp altogether, according to Marine Corps Times’ Jeff Schogol.

The tentative proposal, initially proposed by then-Secretary of Defense Ashton Carter in 2016, is only one of several ideas being considered to combat concerns about severe cyber warfare readiness by allowing qualified information-technology specialists to enter the service laterally, at the rank of staff sergeant or higher — foregoing recruit training and jumping right into the digital fray.

The Marines are far from the only branch to consider a proposal like this; in fact, they’re outliers, the one service that’s proven most resistant to the idea. After all, it’s in boot camp that recruits learn what it means to be a Marine, and without that shared experience, the service's identity could be weakened.

Related: The Army Wants To Recruit Cyber Experts By Hiring Civilians At Rank Of Colonel »

At least, that’s the argument put forward by some critics. “If you go away from that, then I think you lose something that has made the Marine Corps what it is,” retired Marine officer Dakota Wood, who served on President Trump’s transition team, told Marine Corps Times. “A Marine is a Marine… If that breaks down, you’ve got problems.”

Recruiting Marines laterally, without the crucible of boot camp, isn’t entirely without precedent: Musicians of the Marine Corps “President’s Own” band aren’t required to attend recruit training, provided they pass their auditions.

Even so, the likelihood of the Corps adopting the proposal is more remote than Marine Corps Times suggests, according to sources in the service who have spoken with T&P.;

Another option being considered is to treat Marine Forces Cyberspace Command like Marine Corps Special Operations Command and limit entry to more senior and experienced Marines. Some have even argued for a standalone cyber service.

While lateral entry may seem like a potential identity-crisis-causing proposal, there are some strong arguments to consider bringing in cyber specialists at mid-career levels. For starters, that’s probably the easiest way to get someone with the right talent: You’re not going to convince a 26-year old who works his own hours and makes $150,000 to trade that in for the life of a private who has every moment of every day planned out for him. But, you give him a decent salary and tell him he can play the “Marine card” to get free drinks, and boom: You’ve got yourself a Marine Corps hacker nerd.

Those in favor of the proposal — which is still purely speculative, Marine Corps officials stressed to Task & Purpose — say that the Corps simply needs too many specialists right now to consider training them up from the start.

Both sides say they’re looking at the risks versus the rewards of such a move.

“There are risks to the trust that is imbibed through the shared experience of having gone through all of the physical and military training,” Katherine Kidder, a military personnel expert with the Center for a New American Security, told Marine Corps Times. “On the flip side, there’s also a huge risk right now if we don’t have cyber expertise resident within the services themselves.”

Personally, I’m of the opinion that anyone who joins the Corps will quickly learn what it means to be a Marine, with or without boot camp. Ten minutes into their first day as hoodie-clad and goateed cyber warfare specialists, they’ll hear the phrases “uber-pog,” “boot!” and “hey there devil dog, did you forget to shave?” — thus binding them in a Marine Corps tradition as old and as storied as recruit training: shitting on the new guy.