On the evening of Oct. 3, in a move peeled right from the pages of the Donald Trump playbook, famous... 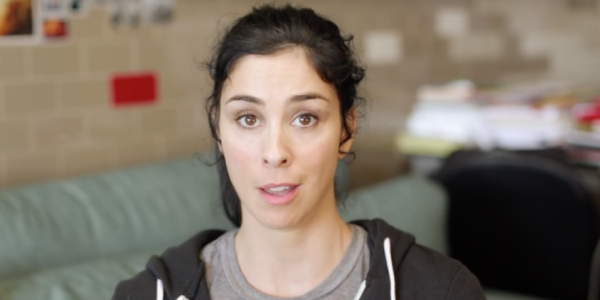 On the evening of Oct. 3, in a move peeled right from the pages of the Donald Trump playbook, famous comedian and political activist Sarah Silverman took to Twitter to express her deepest fears, which, strangely enough, concern the United States Marine Corps — specifically, the potential hazards new Marines face as trainees at Parris Island in South Carolina.

Silverman’s nephew is a new recruit currently going through boot camp at Parris Island. We know this because she broke the news last night to her nearly 9 million Twitter followers in a series of tweets directed at the Marines, an organization currently responsible for the health and welfare of more than 200,000 active duty and reserve personnel, as well as the security of the United States. No biggie.

But Silverman is a star of the highest caliber. She’s been in tons of movies, TV shows, and standup comedy specials. In July, she spoke at the Democratic National Convention, where she prodded Bernie Sanders supporters to back Hillary Clinton with this immortal zinger: “To the Bernie or bust people, you’re being ridiculous.” Silverman’s nephew, on the other hand, is just a regular guy, who, like millions of other regular guys and gals before him, joined the Marines to serve his country and definitely not to get woken up in the middle of the night by a group of drunk drill instructors and thrown into a clothes dryer like a pair of wet human underwear.

That, of course, was the fate allegedly suffered by another Parris Island recruit in July 2015, and at the hands of the same drill instructor accused of hazing Raheel Siddiqui, a 20-year-old Muslim recruit, so severely that he tragically leapt to his death from a three-story balcony to escape the abuse.

@USMC please help! I sent a care package to my nephew at Parris Island & now am worried he'll be in trouble for it. I'm an idiot. Please dm

I’ll take this opportunity to point out that anyone under the age of 50 who claims that ass-beatings and getting stuffed into household appliances is just “a part of boot camp” is full of shit.

Related: Why a zero-tolerance military hazing policy may not be effective »

Or maybe not. According to The Washington Post, up to 20 Marines “face either criminal or disciplinary action, and the service has removed numerous senior officials at Parris Island after investigations found that they had not done enough to stop it.” More than 100 other cases of abuse and hazing at the training center are also currently under investigation. That’s insane. When I went through Army basic training in 2006, the most you had to worry about was getting pinkeye from someone farting on your pillow, and I thought we had it tough!

@USPS I need to stop a package but I don't have the tracking # only the cc# I used.

So does Silverman have good reason to be concerned? Yes. But is it fine for her to leverage her celebrity status to draw attention to the fact that Parris Island may or may not have devolved into a Lord of the Flies-like environment where young Americans like Siddiqui go to begin a career in service to their country but instead find themselves being physically abused by the very people charged with shaping them into strong, capable Marines? Absolutely.

We appreciate and understand your concerns and thank you for sharing them directly with us. Rest assured, the recent (1/5)

Because here’s the thing. When you fuck up, there are consequences. And the bigger the fuck up, the bigger the consequences. That’s physics. Plenty of people will lament the fact that a celebrity — a liberal celebrity — is meddling in the affairs of the Marines, but opening the Corps up to scrutiny from outsiders is one of the many risks those drill instructors ran when they decided to go rogue. If Parris Island becomes “softer” as a result of all this, they’re the only ones to blame.

into Marines. We are actively engaged in ensuring every one with a loved one or family member (3/5)

working hard to earn the title Marine is assured and informed. We remain committed to your nephew's success, and when (4/5)

Prior to the scandal, the Corps may have been in a position to ignore Silverman’s frantic tweets, which are like the internet equivalent of an overly protective mother showing up to her son’s first day of high school with his asthma inhaler and a megaphone. Understandably, the Corps press office kept a straight face, keeping the responses polished, professional, reassuring, and, most importantly, aggression-free.

he's earned the title Marine, he'll be proud and so will we! See you at his graduation. (5/5)

But what if they had opted for the opposite approach? What if, instead of placating Silverman’s fears, the Corps decided to have a little fun with it. That is certainly not the world we live in right now, but, hey, that’s what imaginations are for. Without further ado, here are five tweets the Marine Corps could’ve written in response to Silverman had they a) shared our sick sense of humor, and b) not been in the throes of one of the biggest scandals to beset Parris Island since the 1950s: