UNSUNG HEROES: The Soldier Who Took 3 Bullets In A Raid And Never Backed Down 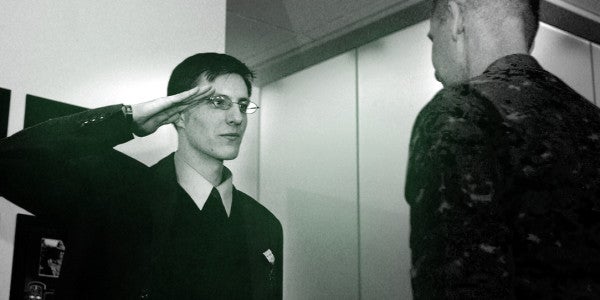 On Nov. 19, 2005, the Saturday before Thanksgiving, Army Pvt. Stephen C. Sanford was serving with the 2nd Battalion, 1st Infantry Regiment, 172d Stryker Brigade Combat Team when his unit was ordered to provide backup for Iraqi police, in Mosul, Iraq.

They were taking on heavy gunfire from insurgents hiding out in an enemy safe house.

Sanford’s squad was the second to answer the call and enter the fray, and it did so amid a barrage of enemy gunfire. The initial push left the first squad overwhelmed, and number of soldiers were pinned down and suffered a number of casualties.

On his squad’s first attempt to secure the house, Sanford was shot multiple times before an insurgent bullet made it through his armor and into his leg. However, he fought through the pain and accompanied his team on a second attempt to help evacuate the fallen soldiers.

Once the unit was inside the house, Sanford provided cover fire while the casualties were evacuated. He continued to engage the enemy while escorting wounded soldiers from the house, according to his award citation.

When all but a few were accounted for, he returned to the house a second time to provide cover fire for the final withdrawal of casualties

With the house cleared, one soldier was moving out when he was shot in the neck by an insurgent.

Sanford immediately put himself in the line of fire and began performing life-saving aid. While attempting to resuscitate him, Sanford was shot twice more in the back, injuring him in ways that could easily have been fatal.

Still, Sanford managed to shield the injured team mate while returning fire. He even killed an insurgent. He continued returning fire while helping his wounded comrade until he was incapacitated by his own loss of blood, according to the Army.

For his valiant actions, he was awarded the Distinguished Service Cross on Feb. 27, 2007 by Marine Gen. Peter Pace, then-chairman of the Joint Chiefs of Staff.

“I have had the distinct honor of participating in many award ceremonies,” Pace said. “This is the first time I have ever had the honor of awarding a Distinguished Service Cross.”

He added, “Thank you for doing what soldiers have always done in combat — to serve, to serve well and to serve above and beyond what any of our fellow citizens would ask you to serve.”