UNSUNG HEROES: The Airman Who Saved 10 Men From A Burning Chinook

On March 4, 2002, Senior Airman Jason D. Cunningham was serving as a pararescueman near the village of Marzak in... 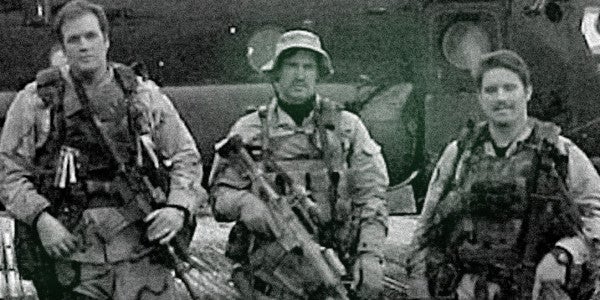 On March 4, 2002, Senior Airman Jason D. Cunningham was serving as a pararescueman near the village of Marzak in the Paktia province of Afghanistan. He was the primary Air Force combat search and rescue medic assigned to a task force sent to recover Tech. Sgt. John A. Chapman, a combat controller for a SEAL team, and Petty Officer 1st Class Neil C. Roberts, a SEAL, who were trapped in Al-Qaeda-held territory.

Roberts had been thrown from his transport helicopter when it was met with enemy fire, and Chapman was sent in an initial push to rescue him.

Around 3 a.m., Cunningham’s task force was being transported by Chinook helicopter. By the time it reached the site where the group was meant to pick up Chapman and Roberts, it no longer had the cover of night. The enemy was waiting, a rocket-propelled grenade and small arms fire overtook the helicopter, causing it to crash-land in the mountains.

According to Cunningham’s citation, “The assault force formed a hasty defense,” which became part of a 15-hour firefight. None of the men were killed by the crash, but they suffered three fatalities and five critical casualties in a barrage of enemy fire soon thereafter.

Surrounded by flying bullets, Cunningham began triaging the wounded from within the Chinook with help from a medic. But the helicopter’s cargo bay soon became a collection point for the bodies of fallen soldiers, according to Military Times.

Four hours into the fight, the Chinook became too dangerous for Cunningham and the remaining injured men. Using a small sled, he dragged the wounded troops away from the aircraft, crossing the line of fire seven times in the process. But it wasn’t safe there either.

Cunningham and the medic then had to move the men a second and third time. Then his medic was shot twice, and Cunningham was hit too.

But he continued on, telling the other men how to care for the wounded.

He knew was losing blood fast. As time went on, the snow beneath him had turned from white to red, until 8 p.m. when he lost consciousness and died. Cunningham became the first pararescueman to be killed in combat since the Vietnam War.

Back at Bagram Air Force base, it was revealed that all the men he treated in the field survived.

For his bravery, he was posthumously awarded the Air Force Cross Sept. 13, 2002. It is the second highest award after the Medal of Honor.

“Even after he was mortally wounded and quickly deteriorating, he continued to direct patient movement and transferred care to another medic. In the end, his distinct efforts led to the successful delivery of 10 gravely wounded Americans to life-saving medical treatment,” his citation reads.

As of 2015, however, Cunningham is being reconsidered for an upgrade to the Medal of Honor for his actions.