UNSUNG HEROES: After Suicide Ambush, Airmen Ignored Their Wounds To Save The Team 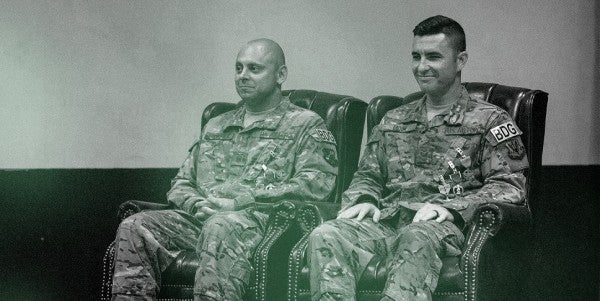 On Dec. 21, 2015, Master Sgt. Aaron B. Frederick and Staff Sgt. Bradley D. Mock, both from the 824th Base Defense Squadron, were on a patrol roughly three miles north of Bagram Airfield, Afghanistan, when a man approached on a motorcycle laden with explosives.

Six airmen were mortally wounded and five others critically injured when the suicide bomber drove into the joint patrol and detonated the explosives, reports Air Force Times.

Related: UNSUNG HEROES: This Combat Controller Has Become One of the Most Decorated Airmen Ever »

Frederick was disoriented by the explosion and sustained second degree burns, but was undeterred as he led the survivors in establishing a perimeter, and directed back-up forces to send in a medical evacuation, notes WFXL, a Fox News affiliate,

In spite of his wounds, Frederick insisted that the other wounded personnel receive treatment first when the medevac arrived, and remained on the battlefield until he accounted for all members of the team.

After the blast, Mock, a tactical security element radio telephone operator, was knocked unconscious for a few minutes and received cuts to his face from the explosion. When Mock regained consciousness, he called for immediate assistance from the back-up security team while triaging two severely wounded teammates, in addition to securing sensitive equipment and intelligence.

Together, the two airmen ensured the casualties and survivors were extracted quickly and safely within 40 minutes of the blast.

On July 8, Mock and Frederick were awarded Bronze Stars with valor devices for their decisive and quick action. In addition, each was awarded the Air Force Combat Action Medal and the Purple Heart.

Four of the airmen killed belonged to the Air Force Office of Special Investigations, and in March, the command named Frederick and Mock, along with Staff Sgt. Flavio Martinez of the 105 Security Forces Squadron, honorary OSI agents. The command is a federal law enforcement agency that provide criminal investigative, counterintelligence protective services, and reports directly to the secretary of the Air Force.

“Following the Dec. 21 attack, the immediate actions of three defenders were nothing short of heroic,” the command announced in a March 4 Facebook post. “In a time of chaos, uncertainty, and terror, they immediately ensured the safety of other teammates, cared for the wounded and protected the dignity of our fallen.”