UNSUNG HEROES: The Soldier Who Finished An Ambush With His Knife

One night in April 2009, on a mountainside in Afghanistan’s infamous Korengal Valley, three soldiers with the 1st Infantry Division... 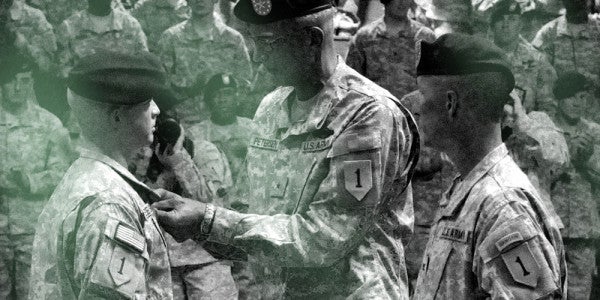 One night in April 2009, on a mountainside in Afghanistan’s infamous Korengal Valley, three soldiers with the 1st Infantry Division sat in a listening post 100 meters away from the rest of their 30-man reconnaissance platoon. The fighting season was just picking up and fresh footprints in the mud provided clear evidence that Taliban fighters were close and on the move.

If the men of 2nd platoon, 1st Battalion, 26th Infantry Regiment harbored any doubts about their ability to engage and destroy the enemy in close combat, what unfolded over the next several minutes was enough to put those doubts to rest for good. After nine months in the Korengal, 2nd platoon had seen its fair of share of heavy combat, but never from a vantage point like the one they had now.

It was Sgt. Zachary R. Reese, one of the three soldiers at the listening post, who spotted the enemy first: a column of insurgents walking through the forest. Reese initially counted eight, but that number quickly increased to 26. Reese relayed the information over his radio to the rest of the platoon, which was dug in for a hasty ambush near the intersection of two trails.

In complete silence, the Americans waited for their platoon leader, 2nd Lt. Justin Smith, to make the call. Most of the soldiers had never seen the enemy this close. Now their infrared lasers were trained on the unsuspecting Taliban fighters as they walked directly at them.

It wasn’t until the insurgents were six feet away that Smith gave the order. The forest erupted with a symphony of gunfire punctuated by exploding hand grenades and Claymore mines, which the Americans had set in place earlier.

Related: The ‘Javelin Aces’ Who Laid Waste To An Iraqi Armored Unit »

The insurgents at the front of the column were cut down before they could react, while those in the rear scrambled wildly in the dark. Several soldiers later told The New York Times that they saw an insurgent run over the side of a cliff. Another was shot as he hesitated at the cliff’s edge.

Meanwhile, at the listening post, Reese and his team picked off squirters, gunning down three and killing two more with hand grenades. The Americans could hear the insurgents who fled back up the trail calling out to each other in the darkness until an F-15 arrived on station and bombed their escape route.

Smith ordered his men to search the bodies. Reese drew his knife and began sawing at the flak vest attached to what he believed was a corpse, but was, in fact, a Taliban fighter pretending to be dead. According to Reese’s Silver Star citation, the insurgent “lunged and grabbed” him. Reese responded by plunging his knife into the man’s eye.

The soldiers killed five more Taliban fighters on the mountain before returning to their outpost. No Americans were wounded in the fight.

The following year, as Reese was preparing to separate from the Army after a four-year enlistment, he was awarded the Silver Star during a ceremony at Fort Knox, Kentucky, home of the 1st Infantry Division. Upon presenting Reese the medal, Brig. Gen. David C. Petersen told him, “Your bravery that day embodies the spirit of the Big Red One.”