UNSUNG HEROES: The Soldier Who Took Out A House Full Of Insurgents With His M249 And A Knife

On Nov. 10, 2004, during the Second Battle of Fallujah, Army Staff Sgt. David Bellavia's platoon was ordered to clear... 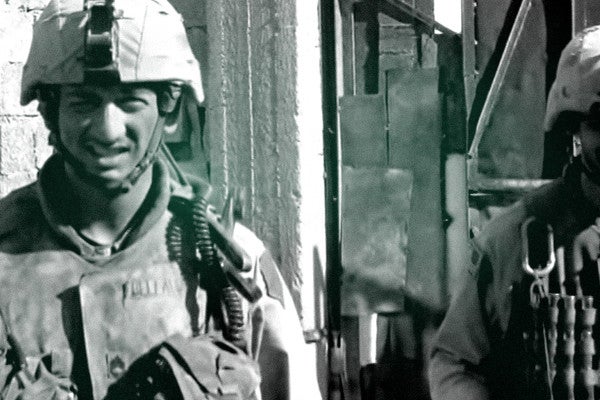 On Nov. 10, 2004, during the Second Battle of Fallujah, Army Staff Sgt. David Bellavia's platoon was ordered to clear a block where insurgents were firing on American forces.

He was assigned to 2nd Battalion, 2nd Infantry Regiment, 1st Infantry Division, and the group's mission was to secure 12 houses. The first nine were empty, aside from rocket-propelled grenades and stockpiled arms.

However, upon entering the tenth house, a firefight broke out inside, trapping Bellavia and four other soldiers.

“We walk into this, and machine guns just go off. Strobe lights, pieces of glass, bullets were just coming through the wall, and someone yelled out, 'We're all gonna die,'” Bellavia told AOL News.

According to his citation, “Bellavia, armed with a M249 SAW gun, entered the room where the insurgents were located and sprayed the room with gunfire, forcing the Jihadists to take cover and allowing the squad to move out into the street.”

The group called for backup. Afterward, however, Bellavia decided to return to the house to clear it. Upon entering, the soldier fatally shot an insurgent who was loading an RPG, and wounded another.

Seeking cover, he entered a bedroom, but was followed by that same fighter, forcing Bellavia to kill him to protect himself. Meanwhile, a third enemy fighter began shooting from upstairs. After a brief firefight, Bellavia took him out too.

But the fight was far from over. Bellavia fired across the room to secure it, but a fourth shooter emerged from the bedroom closet.

Though Bellavia wounded him, he managed to pass him and run up the stairs to where a fifth insurgent was calling.

However, upon entering the room, Bellavia realized that the room was filled with propane tanks and explosives, which he knew would detonate if he engaged in a firefight.

As the insurgent returned to the bedroom, Bellavia had no choice but to fight the enemy in hand-to-hand combat.

“Hearing two other insurgents screaming from the third story of the building, Bellavia put a choke hold on the wounded insurgent to keep him from giving away their position,” the citation reads. “The wounded Jihadist then bit Sergeant Bellavia on the arm and smacked him in the face with the butt of his AK-47.”

So Bellavia pulled out his knife and slit his throat.

But the staff sergeant was then met by three more insurgents who came to aid their comrade.

Two entered the room as Bellavia slipped out, but one began shooting at him from the roof of the second story. He shot the insurgent on the roof, and was finally relieved as five members of his platoon entered the house and took control. Shortly after, air support arrived and Bellavia and his division evacuated the area.

For his actions that day, Bellavia was awarded the Silver Star for conspicuous gallantry and intrepidity in action, and nominated for a Medal of Honor.

After serving six years, Bellavia retired to Batavia, New York, in 2005. He chronicled his experiences in a memoir called “House to House: An Epic Memoir of War,” which was co-written by him and author John R. Bruning. Since separating, Bellavia also helped found the political action group, Vets for Freedom.