UNSUNG HEROES: The ROTC Student Who Stopped A Rape And Armed Robbery At A Party 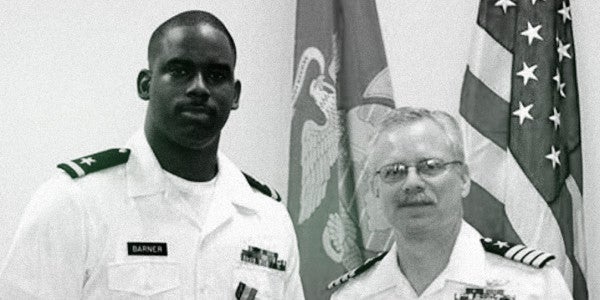 On May 3, 2009, around 3 a.m., two armed men, masked and dressed in black clothes, broke into an apartment in College Park, Georgia, during a party. The pair, Calvin Lavant and Jarmal Hill, were armed with a silver revolver and a black handgun, and forced eight of the guests down on the ground.

Marine and a Navy ROTC student at Georgia State University Sean Barner and another Marine, James Adams, were outside during the break-in, but reentered to find all their friends on the floor. They were also forced on the ground at gunpoint. The two assailants then proceeded to rob everyone of their wallets and cell phones.

Lavant and Hill then separated the party-goers, pushing the six men into one bedroom, two women into another bedroom, and leaving two women in the living room, reported The Washington Post.

“We are about to have sex with these girls, then we are going to kill them all,” Lavant said as the six men listened.

Noting that the apartment was in a seedier neighborhood, Barner, who holds a concealed-carry permit, stashed a firearm in his backpack before heading over — just in case. It was stored in the bedroom, and remained untouched, sitting behind the bed. He pulled it out, and slowly walked into the hall with Adams trailing quietly behind.

“Knowing that this was not a nice area of town, I brought along a firearm which I left in my book bag,” Barner told Navy public affairs. “I was lucky that the room I was locked in had my book bag and had not been searched.”

He fired several shots into the living room, causing Hill to flee. Lavant, however, was with the two girls in the second bedroom.

Barner forced open the door and shot at Lavant, hitting him in the face and thigh as he attempted to escape through the window. One of the girls was caught in the crossfire and sustained gunshot wounds, but recovered.

Lavant, however, was found dead outside of the apartment.

During an award ceremony in 2011, a newly commissioned Ensign Barner was awarded the Navy and Marine Corps Medal. Very rare, it is considered the highest non-combat medal a sailor or Marine can be awarded.

“He is a hard worker, extremely diligent and a huge team player in the unit,” Sims said. “It was great that he got to receive the medal with the victims and his family in attendance.”

In September 2015, Hill was charged with Lavant’s death, in a Georgia Supreme Court case under a Georgia murder statute, which states that someone is guilty of felony murder “when, in the commission of a felony, he causes the death of another human being.”