Wingboarding Is The Extreme Sport Of The Future, And The Future Has Arrived

Not long ago, a guy chugging a Mountain Dew and jumping out of an airplane with a parachute was the... 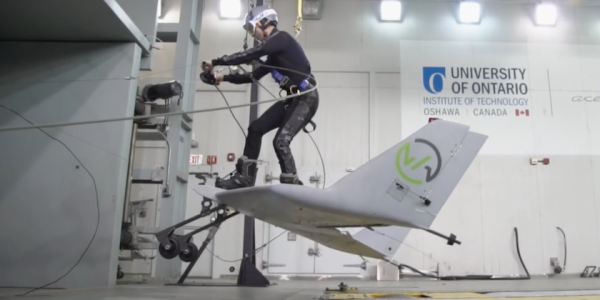 Not long ago, a guy chugging a Mountain Dew and jumping out of an airplane with a parachute was the pinnacle of extreme sports. Now, there’s wingboarding. As the name suggests, it’s like wakeboarding, but instead of doing it on water behind a boat, you do it while being dragged through the clouds behind an airplane.

“The WingBoard takes the thrill of … adventure sports to another dimension, combining the exhilaration of prolonged flight with the rush that comes when you’re in control,” reads the website for Wyp Aviation, the Alabama-based company developing the WingBoard.

If you came of age in the 90s, you’re probably familiar with the WingBoard concept, which first appeared in the tragically short-lived animated TV series, “Talespin.” In the show, a little orphan bear-boy named Kit Cloudkicker zips around the sky upon a crescent-shaped metal platform, or airfoil, attached by a tow rope to an airplane (see him in action in the video below).

It was Kit’s airborne antics that inspired the development of the Wingboard, as Wyp Aviation founder Aaron Wypszynski explains in a promotional video. “It’s something that I used to watch every day after school,” he says. “I always thought it was the coolest thing.” See, dreams do come true.

Just like with wakeboarding, WingBoard riders control the board by leaning forward and backwards and shifting around their body weight (easy, peasy!) while clutching a tow rope as if their lives depend on it, because they sort of do. Fortunately, the board is also equipped with a number of safety systems, including a parachute, to, you know, ensure that you don’t plummet to the Earth and smash to pieces like a pumpkin.

In design since 2013, the WingBoard is now in the third and final phase of development — full-scale prototype testing. According to the Wyp Aviation website, the first human flight test will be conducted this year.