The Lego SR-71: Because Being A Grown Up Is For Suckers And Spy Planes Are Awesome 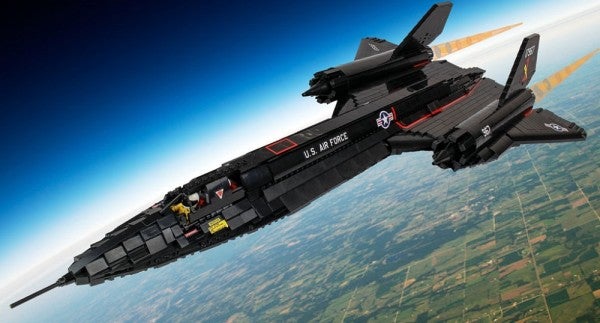 The SR-71 Blackbird is a legend, a spy plane that has captured imaginations since it first went Mach 3.5 over Soviet spymasters in the 1960s; you may recognize its distinct profile from spy flicks, espionage novels, and in multiple Marvel universe movies as the X Men’s chief mode of transport.

Now, for all of us who grew up nerding out over a plane that could outrun a missile, there’s this:

The Lego SR-71 Blackbird by Plane Bricks is a sight to behold, and it costs a dime, too.Flickr/Plane Bricks

The Lego Blackbird includes folding landing gear, tilting wing flaps, and a removable cockpit so you can peer inside at your yellow-brick-topped pilot, according to HiConsumption.

While it’s not the first time the tiny building blocks — or foot-stabbing caltrops, as any parents reading this can attest — have been used to recreate a military aircraft, this Lego SR-71 — by Jonah T, Padberg, the master Lego sculptor behind Plane Bricks — is certainly the most stylish. And at $950, it had better be.

Plane Brick’s SR-71 Blackbird is the classiest Lego aircraft in the sky, and at $950, it better be.Flickr/Plane Bricks