It is one of the greatest on-screen examples of fire and movement. 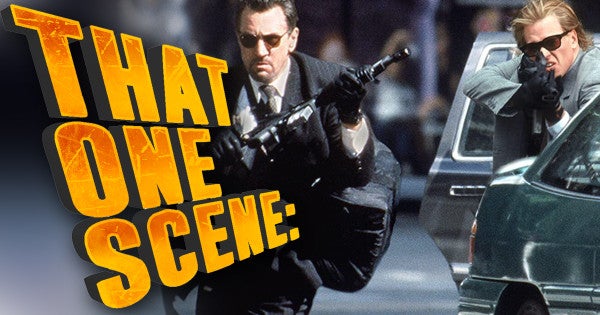 Editor’s note: This article was originally published on July 16, 2020.

It was the winter of 1995 when director Michael Mann unleashed the heist flick Heat on an unsuspecting world. From start to finish the 170-minute-long caper is overloaded with star power. Film legends Robert De Niro and Al Pacino engage in a game of cat and mouse, as Pacino’s hot-tempered Lt. Vincent Hanna and De Niro’s cool and professional bank robber, Neil McCauley, spar relentlessly.

And even though the iconic, and entirely unrehearsed “restaurant scene” is basically just several minutes of unadulterated acting prowess, that’s not what we’re here to discuss. No, we’re talking about a different moment. Yeah, you know which.

For this edition of That One Scene, we’ll be discussing the iconic bank robbery and shootout on the streets of Los Angeles, and that makes us very excited, since the firefight in Heat is the greatest example of fire and movement ever depicted on screen.

When McCauley and his crew of ace stick-up men, Chris Shiherlis (Val Kilmer), Michael Cheritto (Tom Sizemore), and last-minute replacement Donald Breedan (Dennis Haysbert), go through with their plan of a daylight bank robbery in downtown L.A., it quickly devolves into chaos and bloodshed after they exit the building with their bags of cash and find a police ambush waiting for them.

What follows is a shootout that was so good, in fact, that the clip was often played for fresh out of a boot camp Marine privates at the Corps’ School of Infantry, to show them an example how the concept of bounding overwatch was applied in practice.

It’s easy to see why: In the span of roughly 10 minutes, the film’s characters provide each other with cover fire and effectively suppress their foe (in this case, the cops), communicate effectively, and move just like trained infantrymen. Could Neil or Chris be a former grunt? Perhaps.

In favor of that argument is the military-like movements of the characters, which appear early. The crew casually walks into the bank, their M-4-like and Galil rifles well-hidden, suggesting a high level of training and discipline. All three quickly dispatch the security guards, then order the crowd of customers to the floor. Though it sounds like a standard bank robbery scene, they move and operate as a well-trained force, with Neil MacCauley keeping his finger straight and off the trigger and Chris passing bank keys to his partner using his non-shooting hand. Little is said. Much like a Marine team leader, rifleman, and automatic rifleman, they all know their individual roles.

Moving outside, the scene briefly cuts to Lt. Vincent Hanna being warned of a robbery in progress before the crew begins coming out of the bank. Everyone gets in the car except a smiling Chris, who sees two cops in front of him. He fires a heavy burst towards the officers, and unlike most other action movies, the bullets are accurately fired from the shoulder instead of the hip. This ain’t Rambo, ladies and gentlemen.

The robbers eventually get in the car and begin driving away, but their vehicle is disabled in a hail of police gunfire. In front and behind them are road blocks manned by dozens of officers. But that, as we see, is not a problem.

Chris and Michael are the first to exit the car, and they immediately move behind the cover of cars in the road. While maintaining good dispersion, they lay down a blistering hail of suppressive fire on the officers and force them to take cover. “Go!” Chris yells to Neil, who then runs closer to the roadblock and finds his own cover.

They continue the leapfrog maneuver with great success. Though they briefly communicate (“Go!”), Chris and Michael mainly follow their team leader (Neil), who acts as a fighter-leader for the unit. And as they get closer to the police blockade, the bank robbers’ bullets are more accurate and lethal. They have walked into an ambush and are successfully fighting their way out.

At one point, the camera zooms in on the actions of Chris for about 15 seconds. And the brief aside is worth breaking down further. Upon hearing the “go” command of Neil, Chris bounds forward towards the cover of a car and immediately begins firing so his teammates can move. He fires to the front so that Neil can move, then fires to the rear so that Michael can move. Then, he runs out of ammo. Does he freak out?

Not at all. Chris immediately drops to a knee while simultaneously removing the spent magazine. He tucks the rifle under his arm, grabs another from his vest, inserts it, and smacks the rifle with the meaty portion of his hand. He knows to do it that way because he’s aware combat stress negatively impacts fine motor skills. And the reload is fast — in line with your average Marine grunt.

Still, the bad guys can’t end up winning this one, and not just because Al Pacino is better than Robert De Niro (yeah, we said it). They are, after all, bank robbers and this movie needs a happy ending. And besides, the cops are able to lay down effective fire of their own: a pair of officers appear to wound Michael with glass and possible bullet fragments, and an equally well-trained detective, firing with both eyes open, spots Chris to his side before shooting him in the neck.

And then there’s Hanna, who pulls off a sniper-like shot with an FN FNC-80 rifle. As Michael fires blindly at officers behind him, the camera zooms in on Hanna, who moves the rifle’s buttstock high on his shoulder to get the proper cheek weld. He closes his non-shooting eye to focus on the target and takes a breath. He releases. Michael turns with a little girl in his hand. Hanna fires and hits him directly in the head. The girl is saved and the robber is dead.

One thing that’s unmistakably missing from this sequence — compared to the host of cinematic shootouts that preceded it — is the random spray and pray hipfire. Every single shooter, from the cops to the robbers, fires with their weapon pressed firmly in the shoulder, while aiming down their sights, and doing their best to use cover.

And then, there’s the fact that the shooters actually reload their weapons, rather than indiscriminately firing hundreds of rounds from a magazine that only holds 30 — yet another departure from previous movie gunfights.

“It’s the first time you’ve ever seen an actor do a reload all the way from beginning to end, with Val Kilmer with the AR,” said Taran Butler, a professional three-gun shooter who’s spent years working behind the scenes on a range of action films as a firearms instructor, to include the second and third installments in the John Wick franchise.

There are other elements beyond the technical that help the scene stand out — mainly that it felt like it was directed and choreographed by people who’d actually spent time shooting, whether it was on the range, or downrange, to include Mick Gould, a British SAS veteran, and the film’s technical weapons trainer. Then there was Mann himself.

“What I love about it, is that Michael Mann knew guns,” Butler told Task & Purpose. “That shootout, what’s so great about it is he turned up the volume. He recorded actual live fire on set, to get that echo through the streets, and that’s why the action sounds so ominous and scary. You know, when you’re around gunfire without muffs on, or you’re ever downrange, you get that chilling feeling.”

The end result is a shootout that accounts for just a fraction of Heat’s total runtime but remains the single most memorable and influential sequence of the entire film.