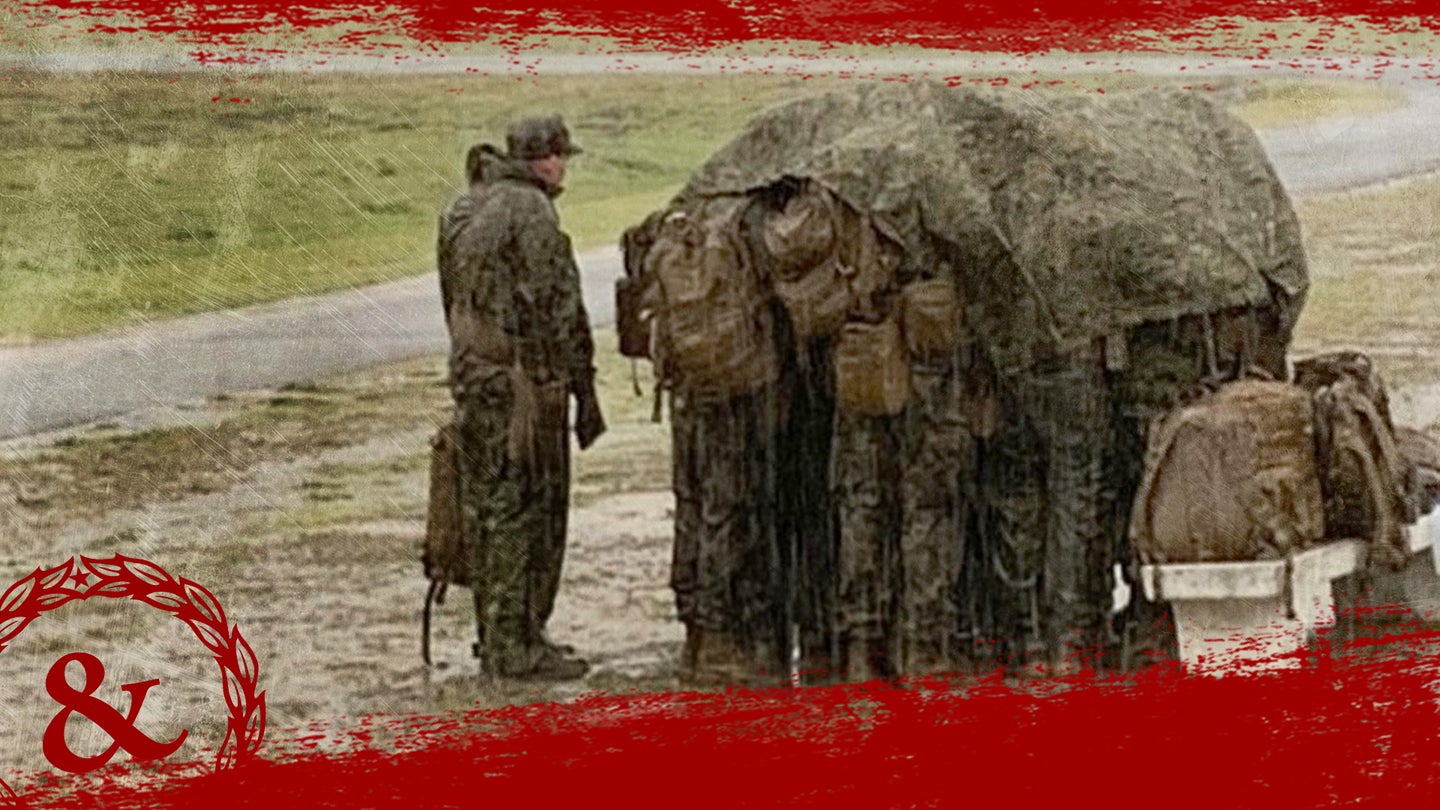 Just like any other job, being in the military comes with its fair share of good and bad. But there may be no better example of both than a recent photo showing a handful of Marines huddling together under a poncho outside in the pouring rain.

The photo, which was recently posted on the Facebook page of Terminal Lance, an influential webcomic for Marines, shows the huddled mass of damp troops packed tightly together under a single poncho. Outside the poncho’s protection, meanwhile, a soaking wet Marine looks on and seemingly realizes there is no more room.

“No [noncommissioned officers] allowed,” the page captioned the photo.

“If you look closely… you can actually see the morale leaving their bodies,” one person joked in the comments.

The photo appears to show only the bad at first glance. And it is certainly bad: Enduring a relentless downpour that soaks everything from your head to your boots will ruin anyone’s day. But there is still some good to be found, with countless shenanigans and jokes likely happening under the poncho.

“Misery can be extremely bonding,” said John Spencer, a retired Army officer and chair of urban warfare studies at West Point’s Modern War Institute. “Suffering together physically, emotionally but knowing others next to you are in the exact same situation.”

Veterans often refer to this as ‘embracing the suck’, though researchers refer to the close bonds formed among service members during adverse times as cohesion, which helps them keep their spirits up in combat when their situation is likely to be far worse than the weather.

“Importantly,” as researchers wrote in a 2006 RAND Corporation study, “group cohesion may also serve to moderate the effects of stress on group performance, helping groups maintain effective levels of performance in the face of external challenges.”

And as one former Marine lance corporal told Task & Purpose, some of the worst moments can often result in the most cherished memories.

“Piled on top of each other, eating local chicken and flatbread [with sand everywhere],” said former Lance Cpl. Michael Rodriguez, describing the miserable conditions he experienced at an Iraqi border town in 2005 as “one of the best memories I have.”

Rodriguez and his fellow military policemen were then escorting Iraqi Border Patrol recruits to a town near the Jordanian border. The mission was simple enough: Pick up the Iraqis and drive about six hours, drop them off, and return. But after the Marines made their way to the Iraqi outpost on the outskirts of Al Qaim, a sandstorm quickly moved in and the plan changed.

“It was still pretty light out and we were going to head out but then the sandstorm struck,” Rodriguez said. So the base commander, an English-speaking Iraqi man, offered the 20 to 30 Marines a tent designed to comfortably fit only half that many.

That wasn’t a problem, according to Rodriguez: “When I eventually fell asleep I ended up just finding an open spot on the ground. It really wasn’t that open and I was half on top of two other guys.”

Yet Rodriguez fondly remembered waking up the next day so covered in sand that he looked like a “life-sized sugar cookie” before the Iraqis brought the Marines fresh roasted chicken and flatbread.

“Some of the best food I had over there and I had access to the [base dining facilities] more often than not,” said Rodriguez, some 16 years later.

The idea of looking back fondly on unpleasant experiences may seem foreign to some, but it’s part and parcel of military service. As author Sebastian Junger argues in his book Tribe: On Homecoming and Belonging, veterans often look upon hardship as a “great blessing” with war and disasters sometimes “remembered more fondly than weddings or tropical vacations.”

“Humans don’t mind hardship,” Junger wrote. “In fact, they thrive on it; what they mind is not feeling necessary. Modern society has perfected the art of making people not feel necessary.”

Indeed, a Marine infantryman named Lance Cpl. Eric Cuneo recalled his own uncomfortable experience training in Latvia in 2017. After running both day and night ranges, he and other exhausted Marines were ordered to build shelters as it began to rain.

“I was fucking wet and cold and tired as hell and just wanted to get some sleep without getting rained on,” said Cuneo.

While others in the platoon used moss and sticks to reinforce their shelters, Cueno said he and his best friend Lance Cpl. Tyler Beverly established a simple shelter that offered limited protection from the cold and rain. “We were miserable,” he said. Yet it was the first thing he remembered when asked about a time of simultaneous misery and happiness in the military.

“It’s one of my most fond memories now,” Cuneo said, emphasizing that the smiles were only for show.

Of course, sometimes the suck just sucks. There’s not much joy to be had while burning feces at a desolate outpost or in losing cherished friends to combat or suicide. But as Dr. Craig Bullis explains for the Army War College, the ability for military members, and especially leaders, to “thrive in ambiguity and chaos” often comes from the essential foundation of pushing people to their limits.

So, the next time you’re put in a terrible situation, know that it may not be fun right now, but you’ll probably find joy in it soon enough. Especially if you’re a Marine lance corporal.