"I've never had a single visit anywhere that I've left going 'That wasn't worth it.'" 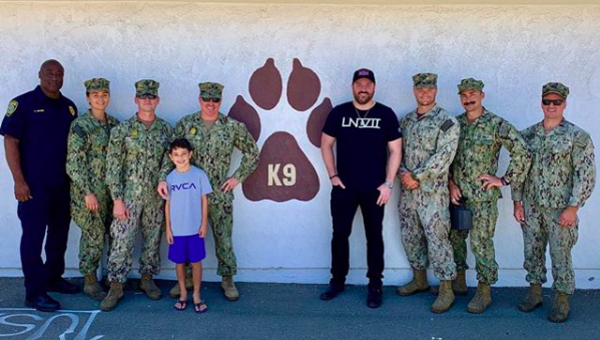 Earlier this month, U.S. military personnel at Naval Base San Diego were surprised with a special treat when country music singer and songwriter Chris Young (“I'm Comin' Over,” and “Think of You”) dropped in for a visit before a nearby performance as part of his Raised On Country Tour. Young and tour sponsor USAA have prioritized visiting military bases and offering tickets to every service members who wants to see his show, which is exactly what he did that night in San Diego.

But his visit was about more than just promoting his tour. As Young told Task & Purpose, his family ties to the military (both his sister and brother-in-law served as Marines), along with friends who serve, have made personally saying “thank you” to U.S. service members “really, really important” to him, no matter where he travels.

I had a great time visiting with our 2 legged and 4 legged military members at Naval Base San Diego last week before my show! Thanks to @USAA for helping coordinate and make it possible! pic.twitter.com/Jmk7gxPtS6

It's not necessarily surprising: the country star has a history of working to spend time with men and women in uniform.

In 2009, Young traveled to Iraq, Kuwait, and Germany with fellow country artist Craig Morgan for Stars For Stripes, an organization that provides entertainment for troops overseas; in 2013, Young raised over $30,000 for Stars For Stripes, and he partnered with Crown Royal a few years later for a fan giveaway, which included Crown Royal donating $10,000 to Stars For Stripes. And in April this year, a month before his tour kicked off, Young performed at a NFL Draft USAA Salute to Service event for service members at Fort Campbell.

Young spoke with Task & Purpose last Friday about his trip to San Diego and what meeting with service men and women means to him. This interview has been lightly edited for length and clarity.

Task & Purpose: Tell me a little bit about your trip to Naval Base San Diego?

Chris Young: One of the things that I've been talking with USAA about is wanting to not only have people come out for the shows, but also be able to get to actually go visit some military while we were in some of the locations, like San Diego for instance. And I got a chance to go out there and meet with everyone from the working dogs unit which was really, really fun. I'm staring at my German Shepard right now so it was very awesome of them. A couple of the men and women actually came in on their day off to hang out with us which was really, really cool. As we got towards the end of the day, we were able to give everybody that wanted tickets to come to the show so a bunch of them ended up at the show that night, so it was just a really awesome thing, wonderful opportunity for me to be able to say thank you to them, get a chance to meet them, and see all of the work that they do on their end.

What were some of the more interesting aspects of their job that you got to learn about or see in action?

Actually just them putting some of the dogs through their paces with what they have them do, a lot of the things that you just don't think about as they do very specific things with each animal. It was cool to see the relationship between each one of the service men and women that were there … and the dogs that they were working with.

Did you pick up any training tips or anything for your own dog?

[Laughing] Yeah I was talking with them, I was like, 'You know what, my dog is really well-behaved but uh, not quite on this level.'

The conversations ranged from everything from what their day-to-day life was like with what they're doing, to being able to say thank you for all of the time that they, not only give up away from their families and everything else, but that they spend to maintain what each one of their individual jobs are on the base. And, yeah I mean obviously being able to reach out to them and say, 'Hey, come hang out for a couple of hours and enjoy yourself' — that's just another way for me to say thank you.

The fact that USAA gives me that opportunity on this tour is invaluable. … The amount of military that I have in my family, that I've become friends with over the years from all of the different trips that I've made — whether it's to bases here in the country, or I've been over to Iraq and South Korea and Germany and Japan — it's something that's really, really important to me, and the fact that I get to loop that in with my job is pretty incredible.

After visiting with men and women in the military over the years, what are some of the things that you've picked up, that you've learned from them?

Just the sheer amount of time that some people end up spending away from their friends and family. As much as I travel, I still have the opportunity to get back to the house every so often and obviously that's not the case with a lot of service men and women, so just knowing the amount of time that they sacrifice and give up to keep us safe, to do everything that they do regardless of what branch they're in, it's a lot. And so I use the words 'thank you' a billion times … but it's important to say it and it's important to let them know that we're appreciative.

Tell me a little bit about your connection to the military — your sister and brother-in-law were in the Marines?

Yes, sister and brother-in-law were in the Marine Corps, my grandfather on my dad's side was in the military, and sadly, really before I was born he was gone so I didn't really get the chance to know him. And like I said, whether it's close friends that have been in the military or people that have become my friends because I met them out there — I was actually just texting back and forth with a buddy of mine who was one of the guys that I got a chance to go over to Iraq with the first time that I went, and we still keep in touch — making those relationships and having a lot of friends and family that are military, knowing what they go through from that end. It's important to me.

With your immediate family having served, you do kind of have that behind-the-scenes look at what these families go through that other musicians or celebrities who visit them may not have, so how does that help you connect with them?

Yeah I mean I think it gives me a little bit of a unique talking point just from having that direct connection to it, and being able to relate to everyone just a little bit more from knowing how long it was when I didn't see my little sister. And we've always been really, really close … when she graduated boot camp, she got the Leatherneck Award for the highest PT score of her class which was really awesome. So getting to see her get honored for that, obviously hearing her stories … it's just an extra layer of being able to relate to everybody.

So she's a PT beast, is what I'm gathering.

[Laughing] Yeah I would not want to try to go do her running regimen, any time, ever.

Does she ever drag you out to get you exercising with her?

Actually a couple weeks ago I was like, 'Hey you wanna go for a run?' She was tagging along with me — I think she was being polite.

Could you give me a little bit of background on your sister's Marine Corps career?

She is no longer active, and my brother-in-law actually just recently got out. That was another interesting thing for me, even though they had both been in the Marine Corps, seeing one person at home and not getting to spend a whole bunch of time with someone else who was in — that's another thing when people talk about time they're giving up with their family — actually seeing that with my brother-in-law and my sister was an interesting dynamic.

So what else do you have planned with USAA with the tour?

There's either one or multiple bases near where we're going to be at, and obviously those nights we go especially out of our way to not just invite a few people but to have as many people as possible at the show and get them taken care of.

So of your overseas trips, which one has left the biggest impression?

The first time I went over to Iraq and we went to Germany, just because it was my first one really being out of the country and that one was the one that enabled me to come back and tell other artists I think they should go do it, and just talk about the trip and talk about how well taken care of we were and the stories that I've gotten from that — you know there's been people that walk up to me at shows recently and be like 'Hey,' and pull out this photo of us and say, 'I met you over here' … and that's just such a cool thing that people remember that, and that it's important to them as well.

What's some of the advice you give other artists when it's somebody's first time going overseas, or just stateside and visiting a base?

Do you have a favorite military film?

Oh man, favorite military film. Obviously this is set in a very different era, but if Glory is on TV I have to stop and watch that every single time.

What is the biggest takeaway, if you could boil it down, of the time you've spent with service members and what you've learned from them?

Having the opportunity to say thank you and getting a chance to do that in a unique way being an artist, to have the opportunity through somebody like USAA to go 'Hey do you wanna go do something and have fun tonight and not have to worry about anything else except enjoying yourself?' I feel really lucky to be in that position and I'm excited that USAA wanted to do it and partner with this tour, and just being able to express that gratitude to every single one of our service men and women that I can get it to.