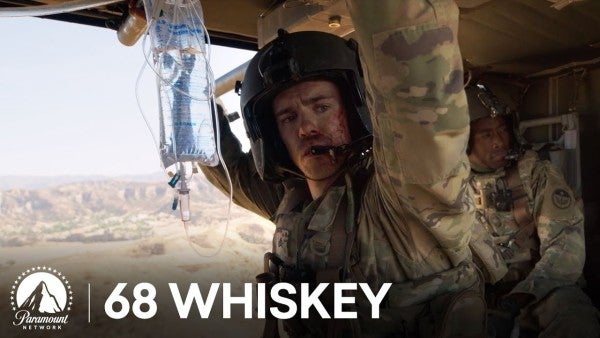 An upcoming television show about Army medics in Afghanistan is being billed as a comedic drama with an action flick's budget, but to me it just looks a lot like a post-9/11 version of M*A*S*H.

Titled 68 Whiskey, the television series is produced by Ron Howard and Brian Grazer and follows a small team of medics during their deployment to an austere outpost dubbed “The Orphanage.”

Based on the trailer, the show does seem likely to offer some laughs and a few good action sequences. There's a boot private who gets lost and embarks on an odyssey to find his unit with a goat as his battle buddy, a random fight night at the camp (instead of, you know, movie night), a soldier gets caught smuggling Persian rugs in a body bag. And this is to say nothing of the copious explosions on what appears to be a massive set.

Then there's the matter of the principal characters. In the behind-the-scenes teaser, Sam Keeley, who plays Sgt. Cooper Roback, describes him as “a guy who breaks the rules and he's a bit of a badass, but he has a big heart,” which is the most generic description for “Hot Guy in military show,” I've ever heard.

Alongside Roback is Sgt. Rosa Alvarez (Cristina Rodlo), an immigrant who's family is being deported while she's deployed, and Staff Sgt. Melkhi Davis (Jeremy Tardy), who seems to be running some kind of side hustle with Afghan drug dealers that involves a sea-bag stuffed with what looks like bricks of hashish.

“I didn't come all the way here from the south side of Chicago to get ripped off by drug dealers,” Davis says in the trailer. “I coulda stayed in the hood for that.”

“'68 Whiskey' is an honest realistic look at a U.S. medical team in Afghanistan,” producer Ron Howard says in the show's behind-the-scenes teaser. Then two minutes later a pair of U.S. soldiers try to do a drug deal with a bunch of Afghans.(68 Whiskey)

And here's where I start to have doubts about the show: All too often, procedural military shows overdo it when it comes to characters' personal baggage (and drama in general).

It's worth noting that not everyone has this rough of a go of it on deployment. For a show that's framing itself as a “realistic look at a U.S. medical team in Afghanistan,” as Howard puts it in the teaser, it makes me wonder: Where is the guy who just really wants to collect some tax-free money and then get out so he can cash in on those G.I. Bill benefits? That seems like a much more common (and believable) story than the plan to pull some Three Kings-meets-Scarface shit in Afghanistan.

But I guess it makes sense: You've gotta spice up war somehow, otherwise where's the drama?

Still, this is just a teaser, so maybe when the show premieres on Jan. 15, 2020, it'll turn out better than CBS' The Code, which was basically GWOT JAG but somehow even less accurate.