Urban Outfitters has a knockoff set of Navy coveralls for $120 for those who wanted to enlist, but…

That's right, Urban Outfitters, the premiere retailer for overpriced of mil-swag is at it again, this time with the Vintage US Navy Coverall for $120. 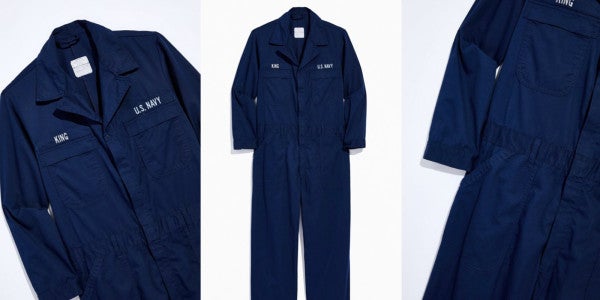 That's right, Urban Outfitters, the preeminent retailer for overpriced of mil-swag is at it again, this time with the Vintage US Navy Coverall for $120. This totally not idiotic piece of apparel was first spotted by J.D. Simkins over at Military Times, who astutely pointed out that “consumers can be forged by a sea of terrible fashion decisions.”

According to the online store, they're “vintage” — yes, we get it, you're ripping off the Navy — and are made from cotton canvas, have pockets that you can actually use, because you're not in the Navy, and come emblazoned with name tapes that read “King” and “U.S. Navy,” which again, you're probably not in if you're buying this.

Staying true to their faux military roots, there are a few caveats: “Only one pair is available for purchase by one lucky customer,” and they can't be exchanged or returned, reads the site.

Unsurprisingly, some folks had a field day in the comment section:

“All you have to do to get these for free is visit Navy Station Great Lakes RTC in North Chicago! Just join the U.S. Navy as a young boot and you'll even get your own name on these instead of cosplaying as Mr./Ms. King,” wrote one commenter.

While another pointed out that the Navy doesn't put a cap on how many sets of coveralls you can get: “You can get these for free by joining the UNITED STATES NAVY!!!! They even give you two pairs!!!! For free can't beat that deal!!!”

That said, if you're looking at this and thinking, you know what I really need to complete this ensemble? A coyote brown MOLLE bag and a set of combat kicks, then check out Task & Purpose's handy guide for how to dress like you wanted to join the military, but…