Between September and December we'll be getting a string of new military shows and movies, so we tossed together a handy list to let you know which ones are worth your time. 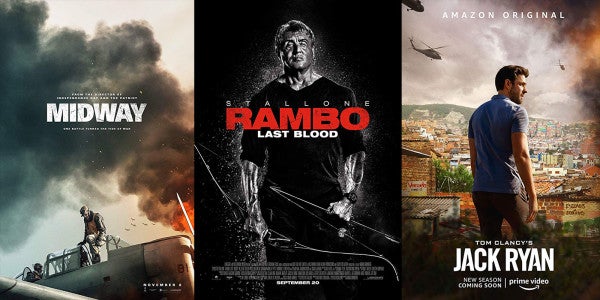 I watch a lot of television, movies, trailers, and trailer breakdowns for work, but here's the thing: I can't tell you or anyone else what makes a genuinely good military movie or show, especially if I haven't seen it yet. And I wouldn't call myself a “critic” in the classic sense. Then again what do they know; they said The Hurt Locker was a masterpiece.

What I do know, is that I get excited about stories that make an honest effort to achieve some measure of authenticity, whether it's a full blown dramatic reenactment of some major conflict, or seeing characters interact (even briefly) in a way you recognize, because you've had those conversations on base, overseas, or while you were drunk at one in the morning in the barracks.

At their best, military movies and shows focus on a character's service as more than a lazy plot device to explain why they're good with guns, have a high and tight, or shout out bits of military lingo at random moments; at their very worst, they may trot out the broken vet trope to add a little drama. And of course, there's the laziest of them where everyone's an operator — even lawyers, apparently.

With that in mind, between September and December we'll be getting a string of new military shows and movies, so we tossed together a handy list to let you know which ones we're excited about at Task & Purpose, and why.

John Rambo is coming back, and, yeah, you guessed it: Nothing is over. Nothing!

Sylvester Stallone returns in what we can only assume will be the final installment in the series as he takes on a Mexican cartel to rescue a family friend — which seems to be just another step in franchise's unending quest to prove that FirstBlood was the only Rambo movie with a thought beyond: MORE EXPLOSIONS AND DEAD BAD GUYS!!!

Personally, I'm going to wait until it's available to stream and just watch it at home, if at all.

Though the movie's sure to be entertaining, it seems like a wasted opportunity, as one of our readers, Will Black, previously commented on a differentTask & Purpose story about the upcoming Rambo flick: What if, instead of another blood soaked killing spree, Rambo aged like anyone else and eventually wound up at a VA inpatient clinic, where he once again delivers his iconic monologue?

“You don't just turn it off…” John Rambo says from his wheelchair in a drab hospital room with IVs in his arms.

“Yeah, I can only imagine. I mean all that killing, the training, the trauma; how could anyone simply switch it off?” replies the concerned VA nurse.

“What? No, you idiot. I'm talking about the dialysis machine. There's a whole shut down process. If you just turn it off my kidneys will go into renal failure! What kind of chickenshit outfit are you running here!”

While not a military show, the NBC drama follows a family over the course of their lives, using flashbacks to reveal portions of the main characters' past. That said, it occasionally hits on military service as it pertains to individual characters, and received a fair amount of praise when Vietnam veteran and author Tim O'Brien was brought on to write and consult for an episode that follows one of the characters, Jack, during his time in Vietnam.

Based on the upcoming trailer for the show's fourth season, it seems likely that This Is Us will again devote some time to exploring wartime service.

If you're looking for a network drama, then it might be a worthwhile show to binge, and if you already follow it religiously, then you don't care what I think because you're going to keep watching it.

The movie follows a group of Marines who decide to break their buddy out of prison after he's arrested for accidentally killing a guy in a drunken brawl. 'Rah.

As I previously wrote for Task & Purpose, I have more than a few doubts about Semper Fi based on the trailer, which makes it look like it's part prison break flick and part moto tat in living color. There's lots of yelling, moral conflict, and some poorly sung cadences, and maybe even a shoot out or two, it's hard to tell from the teaser.

If there's one thing I'd bet my money on, it's that there will be at least one misused and overly motivated “Oorah.”

As Task & Purpose previously reported, Midway was turning point in the Pacific Campaign of World War II. The four-day sea and air battle ended on June 7, 1942, with the U.S. Pacific fleet successfully defeating the larger Japanese force — destroying four enemy aircraft carriers, and losing one of its own. The victory there paved the way for an Allied offensive that continued into the Pacific, before finally ending with Japan's surrender on Sept. 2, 1945.

That ultimate victory may not have been possible had the Japanese navy not been defeated at Midway, due to the battlefield bravery and selflessness of the naval aviators and sailors who carried the day.

It's too soon to know for sure if Midway will successfully pay homage to the U.S. Navy of World War II, or lean heavily on CGI gimics and nonstop explosions — the trailer makes me wonder if it'll be a bit of both. Hopefully we might finally get a WWII naval flick that washes the bad taste of 2001's Pear Harborout of our collective mouths.

1917 follows a pair of British soldiers during World War I as they make their way through enemy-controlled territory on the Western Front to deliver a message that could save 1,600 of their fellow soldiers from an impending trap.

From the director to the cast, the film seems poised to give us a look at WWI we haven't yet seen: Through the eyes of the young men who fought it as they stumble through mud-filled trenches, fumble with gas masks as a yellowish-green tide rolls in, and charge across no man's land under a creeping barrage of artillery fire, knowing that their enemy waits just yards ahead, and that they may die just to capture a few feet of ground.

For starters, it greatly diverges from the Phillip K. Dick novel from which the series takes its name. However, the show offers a disturbing look at what might have come had the Allies lost the war to the Axis powers, with a bit of science fiction inter-dimensional travel thrown in.

In terms of plot, The Man In The High Castle has tried to do what Hulu pulled off with The Handmaid's Tale: Take the basic story line forward for a few episodes, and then abandon it and force the protagonist (and viewers) to navigate America under the regimes of the Third Reich and the Empire of Japan, as they struggle to survive, and then eventually launch a full-scale insurrection.

If you haven't powered through season one of The Man In The High Castle on Amazon Prime, and are looking for something to binge, I'd suggest giving it a shot (or even a second one — it took me two tries) before season four debuts this year, but again, I'd only do this if you already have an account with the streaming site.

The real value of the show, and what makes me excited for the next season, is seeing how the characters navigate this world: One where the United States as we know it has ceased to exist, but they still remember a time when it did.

John Krasinksi returns as the titular hero of Amazon Prime's Jack Ryan. TheTom Clancy inspired series will air on the streaming service sometime this year, and based on the July teaser trailer, it seems like the second season may be heavier on action than the first. In its first run, the series spent a fair amount of time to fleshing out Ryan's backstory, and laying the groundwork for how a Marine vet-turned CIA analyst goes on to become America's answer to every possible doomsday plot or terror attack. Based on the trailer, it seems like season two is leaning that way.

If you like spy thrillers (and Clancy novels in particular) then Jack Ryan will probably hit all the marks you're expecting. And though it's not a military show through and through, the character's time in the Marine Corps comes up, just as his service did in the books, but so far it hasn't been overplayed.

If you've already got an Amazon Prime account, I'd say give it a try.