I'll be honest, I've been wanting a World War I movie that told the story of black soldiers on the Western Front for so fucking long that when I watched the trailer for ​The Great War​ I was almost able to overlook its campyness and over the top 'rah 'rah 'Merica vibes. Almost. 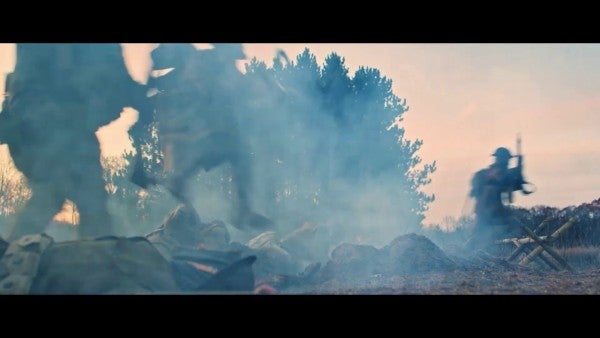 A new trailer just dropped for the upcoming World War I action flick
The Great War.

Written and directed by Steven Luke,
The Great War stars Bates Wilder, Hiram Murray, Billy Zane, and Ron Perlman, and follows a segregated unit of black soldiers on the Western Front in Europe — other reviews have suggested the men belonged to the famed Buffalo Soldiers, but the trailer itself makes no mention of this.

What we do know about the story based on the trailer,
and a very brief blurb on IMDB, is that during the final days of World War I, a group of American soldiers are sent on a mission “behind enemy lines” to rescue a lost platoon. It goes without saying, but things don't go according to plan.

The order to “fix bayonets” is given in the first few seconds of the clip, and then it's just charges through the treeline, close-quarters combat, and a very brief reminder of the racial tensions of the day when a black soldier remarks: “My mom didn't want me dying in some white man's war.”

I'll be honest, I've been wanting a World War I movie that told the story of black soldiers on the Western Front for so long that when I watched the trailer for
The Great War I was almost able to overlook its hokey elements and over the top 'rah 'rah 'Merica vibes.

It reminded me of
The Patriot, but set in 1918 — though that may have been an improvement.

“It looked like guys LARPing out in the woods,” is how one buddy put it when I frantically shared the trailer and asked: Campy, or good?

In all fairness, this is just a trailer, so maybe when the movie hits select theaters on Dec. 13 we'll have a chance to see the grit, grime and brutality of that war, which was due as much to front-line combat, as it was owed to the conditions under which those soldiers lived, day in and day out — much of which seems largely absent from the short promo.

And hell, with luck, we might get a few moments of introspection about how the service of black soldiers was repeatedly undervalued and discounted, even as those men risked life and limb for a country that subjected
them to legalized racism and segregation, and who, in some cases, faced violence when they returned home.

Though based on the trailer, I won't be holding my breath.