Here's what the film gets right. 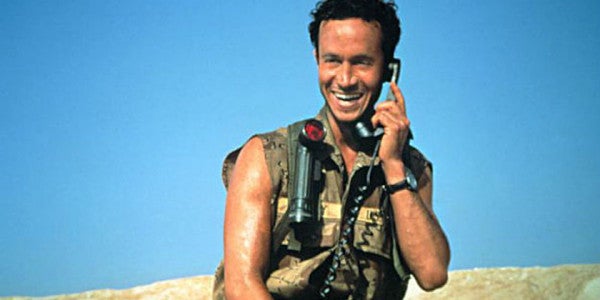 If there’s one thing veterans on the internet love to do — besides melt down about stolen valor — it’s complain about inaccuracies in military-themed movies. For instance, a near-battalion of sneering vets have pointed out that there’s no way the troops in The Hurt Locker could have been playing Xbox 360 since it came out in 2006 and the movie was set in 2005, thereby earning themselves the dual designation of annoying veterans and freaking nerds.

I’m trying to be different. Instead of grousing about mistakes, I’ve been on the hunt for the most accurate military movie. The film that transports me back to my youth as a freshly scalped private, shaking in my mirror-shine polished black boots while a drill sergeant in BDUs questions my sexuality, upbringing, and parental lineage at 110 decibels. I want a movie that captures my glory days drinking local Afghan hooch that could have doubled as a backup fuel source for an A-10 Warthog.

I think I’ve found the film: In The Army Now, that mid-90s classic, which follows two reservists, Bones Conway (Pauly Shore) and Jack Kaufman (Andy Dick) as they serve their nation. Here’s what the film gets right:

As we meet Bones and Jack, they’re partaking in some of the more high-speed combat training reservists get: killing bad guys in video games. Today’s POG-ass weekend warriors (like your beloved writer here) will never receive the same training and experience as our active-duty, combat-arms counterparts, so we have to rely on simulations. And since you can’t exactly hump an EST 2000 engagement skills trainer in your ruck, we’re left with “Call of Duty,” not only to deliver combat know-how, but also for political tips on identifying who is, was and will be a terrorist. And it’s more fun than trying to watch Alex Jones videos.

We all know the future of warfighting is all about unmanned drones and/or large Gundam-style robots doing battle in a nuclear wasteland over sparse sources of uncontaminated water. Pilots of both will need to have excellent hand-eye coordination and extraordinarily dexterous thumbs if our future tribal lands are to expand, allowing our people to repopulate the ravaged Earth.

The motivation for enlisting: money

Bones and Jack want to open their own stereo store, presumably because they keep destroying the merch in the store they currently work in. You might imagine that the kind of guy who topples over over a wall of TVs while banging his girlfriend in the store room has no business anywhere near heavy weaponry. You would be wrong. With the proper training, that destructive power can be harnessed and cultivated. Just think, if the movie were set amid our current wars, we could send Shore and a lady friend to get busy behind an ISIS communication tower and bring down the whole terrorist network.

Of course, lots of people join up for patriotic reasons, and you can easily spot them by the large “Live free or die” back tattoos they drop two grand on right after basic training. For everyone else, while the pay ain’t great, picking the right job can get you a sweet signing bonus. Patriotism and serving your country are great, but it’s nice to get paid. Who doesn’t want to open a stereo store?

A realistic look at basic training

The Basic Combat Training (BCT) Bones and Jack go through is at Fort Sill, Oklahoma, and the whole basic training sequence plays like a walk down memory lane, especially for older soldiers. There’s the old style sweatsuit PT uniform, the front-back-gos, the cattle cars for transportation, and the open-bay barracks that ensured you passed around at least three head colds during the nine weeks you spent together.

The most telling detail is Jack complaining about his Army issue eyewear, the ever fashionable BCGs, or “birth control glasses.” Back in the day, every soldier with an optical prescription got a pair, and they earned their name by being attractive on literally no one.

The agony of a “Dear John” letter

To more cynical viewers, the decision to have Bones’ girlfriend to dump him soon into his first deployment might seem like a contrivance to set up a romantic relationship with Pvt. Jones (Lori Petty), the hard-charging GI Jane of the squad. I hate to break it to you, but the deployment dump is a rite of passage for any soldier foolish enough to think he’s got a longterm thing going on with the townie he’s been hooking up with for the last three months. I was single during my first deployment, but about five months into my second, I got dropped by the woman I was with. It wasn’t my most devastating breakup. (That was you, Amber, who left me for a woman. Why, Amber?)

Heartbreak is a necessary part of life, but it’s an integral part of the life of a soldier, and it’s handled well in this movie. The only little tweak I might make would be this: Bones gets home to discover his account has been drained and his credit is ruined, and he’s forced to take on another deployment to pay off the boat he now owns but has never seen.

The active-duty soldiers are kind of dicks

Look, this isn’t going to be popular, but you active-duty cats could really use some acupuncture or back massages or something when you’re on a deployment. Maybe you don’t see us reservists and National Guardsmen as real soldiers. Maybe you don’t like that after all this war shit, we get to head home to Fort Couch while you’re on your way to whatever armpit of America your duty station is in.

This reality is borne out in the film, where practically everyone has it in for Bones, despite his relentless optimism and enthusiasm. He accidentally hits one Special Forces troop with a spring from his flashlight, and the dude can’t leave it alone. The first sergeant is immediately on his ass from day one of the deployment. And even his own team loses faith in him when he innocently gets them completely lost in a desert.

For these reasons, I hold that In the Army Now is the greatest film about military life ever made.

I know. It’s Pauly Shore. You may not like his voice, or his comedy, or his mere presence in the world. But three months into a deployment, it’s nice to have a goofy dude like that around, a walking bit of comic relief who’s just trying to make the best of a bad situation. It sure beats hanging around the sergeant who just got dumped by his second wife.

Related: Here’s why ‘The Hurt Locker’ is the worst war movie ever made