Don’t Call It An Insurgency: Only ‘Disparate Cellular Structures’ Of ISIS Remain In Iraq, DoD Says 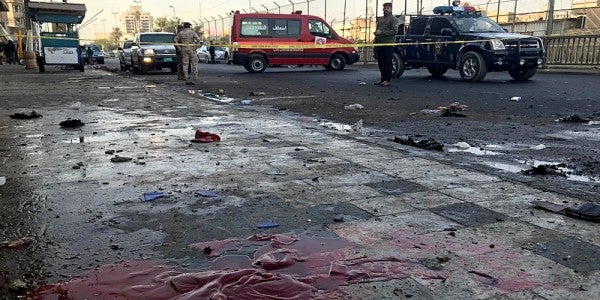 Nearly 15 years after the U.S. military toppled Iraqi president Saddam Hussein, the U.S. government is replaying its post-invasion script that only a few isolated groups of fighters remain in Iraq. After two suicide bombers killed more than 30 people in Baghdad on Jan. 15, a U.S. commander in Iraq said it is too early to determine whether ISIS has morphed into an insurgency.

“There are still remnants of ISIS, who reside in a cellular structure, who seek to bring instability to local areas, in particular population centers,” Marine Brig. Gen. James Glynn, head of coalition special operations forces in Iraq, said during a Pentagon news briefing on Tuesday. “There’s no indicator of any coordination. It’s merely a matter of disparate, cellular structures trying to have some legitimacy, some recognition.”

What’s left of ISIS in Iraq is trying to be “disruptive” is U.S.-based security efforts thereby launching attacks such as the double suicide bombing in Baghdad, Glynn said. Iraqi security forces are taking a close look at areas such as Hawijah and Tuz Khurmatu in case they need to be re-cleared of ISIS cells.

If it sounds like you’ve seen this movie before, that’s because Glynn’s comments were essentially the same press briefing that Pentagon officials have delivered since the initial invasion of Iraq in 2003, when former Secretary of Defense Donald Rumsfeld initially refused to acknowledge that the power vacuum that followed from the U.S.-led invasion begat the Sunni insurgency.

“There's no question but that in those regions where pockets of dead-enders are trying to reconstitute, General Franks and his team are rooting them out,” Rumsfeld said in June 2003.

Rumsfeld was sorely mistaken. Paul Bremer, the U.S. civilian administrator of Iraq in 2003 and 2004, made a series of blunders that nearly doomed the war from the outset, such as disbanding the Iraqi army and taking power away from Sunni sheikhs in Anbar province. When U.S. troops swept up military-aged Iraqi males in raids, they inadvertently turned prisons into networking opportunities for future militants.

But even after Iraq took its initial nosedive into hell, Rumsfeld insisted in November 2005 that “insurgency” was the wrong word to describe Al Qaeda in Iraq, then led by Abu Musab al-Zarqawi.

Rumsfeld argued that it is impossible for an insurgency to be legitimate in a country with a cohesive, popularly supported government, such as Iraq. He also said al Qaeda’s only goal was to promote disorder, so it did not meet the dictionary definition of an insurgency.

“I've thought about it, and over the weekend, I thought to myself: ‘You know, that gives them a greater legitimacy than they seem to merit,’” Rumsfeld said at Pentagon news conference. “Why do you – why would you call Zarqawi and his people insurgents against a legitimate Iraqi government with their own constitution? It just – do they have broad popular support in that country? No”

After a string of defeats for ISIS, the U.S. is once again declaring that the enemy has no legitimacy with Iraqis simply because the group no longer controls Mosul, formerly Iraq’s third largest city, or any swathes of territory in northern and western Iraq.“The so-called caliphate has been dismantled, at this point, and so ISIS has no recognizable structure of the bureaucracy that they had previously sought to achieve,” Glynn said on Tuesday.

Iraqi counterterrorism forces are keeping the pressure on isolated ISIS cells to prevent them from combining to form an insurgency and to “give them no alternatives but to be captured or killed,” he said.

While ISIS has been badly mauled in Iraq, the group’s future is unclear. Right now, ISIS in Iraq only has one or two cells that can launch operations, so it is too early to tell if the movement has political mass, according to Daniel Masters, who teaches international relations at the University of North Carolina Wilmington.

Although the terrorist group is too fragmented to present a unified threat, sectarian divisions between Sunnis and Shiites could help ISIS gain momentum. Masters told Task & Purpose that while insurgencies and terrorist groups are also rarely defeated by external forces, ISIS was formed by the remnants of its predecessor, al Qaeda in Iraq, which was defeated by the Sunni “Awakening” movement.

“To think that ISIS could morph into something else is not beyond the realm of imagination,” Masters said. “We do know that when violent organizations collapse they tend to move through stages of an ‘extinction burst’ meaning they begin to act erratically and in potentially more violent ways.

“I would think that concerns over the now defeated ISIS stem from this point of thinking,” he added. “The history of AQI’s resurrection into ISIS is very salient.”