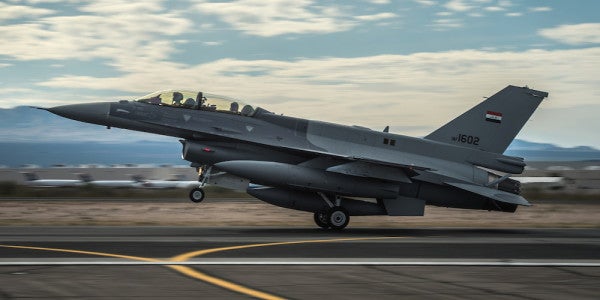 The office of the Iraqi Prime Minister Haider al-Abadi announced on April 19 that the country’s “heroic air force” had carried out a series of deadly strikes against “the sites of the terrorist [ISIS] gangs in Syria on the Iraqi border.”

Shortly after announcing the strikes, the Iraqi Air Force released footage of its brand-new F-16IQ Block 52 fighter jets en route to their targets in Syria. According to The War Zone, the footage reveals a payload of several GBU-12 500 lb laser-guided munitions, as well as a Lockheed Martin Sniper Advanced Targeting Pod (ATP) that has proven essential for target detection and identification in counter-insurgency operations.

This is absolutely some Good Shit: After all, the Pentagon just admitted on April 17 that ISIS has maintained at least some foothold in Syria, and allowing them to persist unmolested will only cause the country to backslide into chaos.

But these strikes weren’t ordered up unilaterally by al-Abadi to reinforce Iraq’s delicate security situation or flaunt his new air force; indeed, Reuters notes that the strikes “were carried out in coordination” with the Syrian regime of Bashar al-Assad — you know, the guy we literally just bombed for his alleged chemical attacks on civilians.

For now, the DoD doesn’t seem too bothered that its client state Iraq just coordinated with the regime it just bombed. Indeed, a spokesman for Operation Inherent Resolve issued a statement on April 19 saying that the U.S.-led coalition “will not rest until we eliminate [ISIS] not only in Iraq, but in the region.

Iraqi Air Force @iqAirForce conducted strikes vs. ISIS in Syria today. PM @HaiderAlAbadi on Tuesday: We will not rest until we eliminate Daesh not only in #Iraq, but in the region. #defeatDaesh @CJTFOIR @IraqMoDSpox @ArmY_Iq pic.twitter.com/wvfu0Bogfp

But all of this makes for an increasingly crowded airspace above Syria. As part of those combined strikes by U.S., U.K., and French forces on April 13, aircraft from all three nations deployed munitions against the sites — including the recently-deployed B-1B Lancer that’s been absent from air operations in the Middle East for more than two years. In addition, the Israeli military has increasingly targeted Iranian air defense systems in Syria in recent weeks to prevent Iran from gaining a strategic foothold in the war-torn country.

And that crowded sky underscores the growing complexity of the battlespace there as the U.S. and its allies attempt to juggle both counter-ISIS operations and a delicate geopolitical dance around the Assad regime and its entanglements with Russia and Iran. Indeed, the shootdown of a Syrian Air Force Sukhoi SU-22 fighter-bomber outside by U.S. F/A-18E Super Hornet in July 2017 and clashes between U.S. military advisors and pro-regime forces at the At Tanf garrison in that summer underscored how the overlapping campaigns in the country have the risk of turning into an accidental conflict.

And it’s not just outright conflict but the risk of OPSEC problems. “It seems the U.S. led coalition had at least something to do with the strikes, or at least it has tacitly agreed with them,” as The War Zone notes. “Intelligence sharing is possible, but it would be quite focused/limited considering the Assad regime and Russia could also end up obtaining it.”

Good on Iraq for slapping ISIS in the face, but their entry into Syrian airspace may end up causing more problems than it solves. The more variables in the battlespace, the more opportunities there are for things to go wrong — and after several years beating ISIS to the point of near-death, something going wrong is the worst thing that could happen right now.