A coalition of ships and bombers hammered three Syrian chemical weapons sites with 105 weapons on Friday night in an... 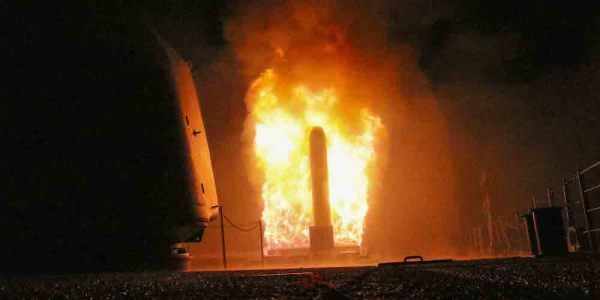 A coalition of ships and bombers hammered three Syrian chemical weapons sites with 105 weapons on Friday night in an escalated response designed to smash the Assad regime's capacity to use chemical weapons like chlorine and sarin gas.

The attack was roughly double the size of the U.S. strike a year ago on a Syrian air base, which was also in response to a chemical attack.

Reports Of A US ‘Armada’ Steaming Towards Syria Are Total BS

Syria's air defenses weren't much of a problem.

“No Syrian weapon had any effect on what we did,” Marine Lt. Gen. Kenneth McKenzie, the director of the Joint Staff, told reporters. McKenzie said there had been “no coordination, no agreement with the Russians” before the strikes.