UPDATE: This story has been updated with comments from Defense Secretary James Mattis. U.S. forces working in a headquarters for... 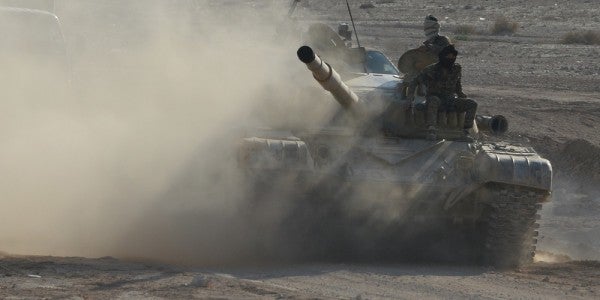 UPDATE: This story has been updated with comments from Defense Secretary James Mattis.

“Forces supported by the coalition targeted the aggressors with a combination of air and artillery strikes,” said Army Col. Thomas Veale, a spokesman for the U.S.-led coalition in Syria and Iraq. “Coalition advisors were with the SDF [Syrian Democratic Forces] in an advise, assist and accompany capacity, and this action was taken in self-defense.”

While details of the attack remain murky, it could be a potentially dangerous development that brings the United States closer to war with Syra — and by association, Russia and Iran. If nothing else, it shows the possibility of mission creep in Syria is increasing as the various factions fighting ISIS turn their attention to fighting each other.

No U.S. troops were killed or wounded in the fighting, said Veale, who refused to specify whether U.S. aircraft and artillery had been used to repel the attack, nor did he specify whether the “pro-regime” forces belonged to the Syrian military or its allies, including Shiite militia, Hezbollah, Iranian Quds Force, or Russian forces.

The attack began Wednesday and lasted into early Thursday morning about 8 kilometers east of the Euphrates River deconfliction line in Khusham, Syria, Veale told Task & Purpose. Roughly a battalion of pro-regime forces launched what appeared to be a coordinated attacks supported by D-30 howitzers, Soviet-era T-54 and T-72 tanks, rockets and mortars, he said.

“We suspect Syrian pro-regime forces were attempting to seize terrain SDF had liberated from Daesh [ISIS] in September 2017,” Veale said in an email. “PRF were likely seeking to seize oil fields in Khusham that had been a major source of revenue for Daesh from 2014 to 2017.”

Related: Is The US-Led Coalition Creeping Toward Outright War With Syria? »

Up to 30 tank and artillery rounds landed within 500 meters of the headquarters with U.S. and Syrian Democratic Forces, Veale said. CNN initially reported that more than 100 pro-regime fighters were killed in the coalition counter-attack, but Veale said there is no estimate of enemy casualties at this time.

Those pro-regime vehicles and personnel who retreated were not targeted by coalition air and artillery strikes, he said.

The U.S.-led coalition has observed a “slow buildup” of pro-Syrian forces in the region during the past week, and coalition officials had alerted the Russians that the Syrian Democratic Forces were in Khusham well ahead of the attack.

It is unclear why the pro-Syrian regime forces launched the attack or whether the fighters came from the Syrian military or other groups fighting for al-Assad, said Defense Seceretary James Mattis, who called the event “a perplexing situation.”

About 300 pro-Assad fighters were involved with the attack, Mattis told reporters on Thursday. All the enemy artillery and two tanks were destroyed by the coalition air and artillery strikes, he said.

“It was self-defense: We are not getting engaged in the Syrian civil war,” said Mattis, who added that if the U.S. military were getting involved in a broader conflict, it would have pursued the retreating forces to the other side of the deconfliction line that separate U.S. and Russian-backed forces.

The Russians told the U.S.-led coalition that none of its forces were involved in the attack, and so far none of the casualties has been identified as Russian troops or contractors, he said.

Mattis said the phone line between U.S. and Russian forces proved to be invaluable in this case because it made certain that the two countries’ forces did not accidentally exchange fire during the attack. The fact that the Russians did not appear capable of calling off the attacking force comes as no surprise, he said.

“We’ve always known there were some of these parties that Russia didn’t have influence over,” Mattis said. “You can’t ask Russia to de-conflict something they don’t control.”

Although the U.S.-led effort in Syria is focused on defeating ISIS, there have been outbreaks of violence before with forces allied with Syrian dictator Bashar al-Assad. In June 2017, a Navy F/A-18E Super Hornet shot down a Syrian SU-22 that had attacked Syrian Democratic Forces.

That same month, an Air Force F-15E Strike Eagle downed a Syrian drone that had attacked U.S. forces embedded with allied fighters and the U.S. launched airstrikes against Iranian-backed fighters in southern Syria.

This latest attack raises questions about whether U.S. troops might exchange fire with Russian forces, which back Assad.