To recognize the centennial anniversary of World War I, the United States Naval War College in Newport, Rhode Island, is... 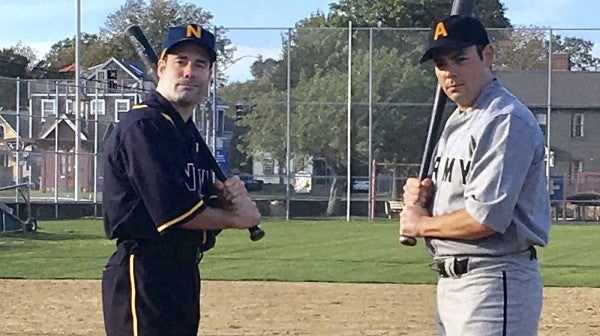 To recognize the centennial anniversary of World War I, the United States Naval War College in Newport, Rhode Island, is celebrating our military forbears in uniform with… well, a different set of uniforms.

At an afternoon baseball game on Sept. 29, Navy sailors and Army soldiers attending the War College will step up to the plate for a 1917-era baseball game, replete with wool uniforms (note the military tuck), wooden bats, and old-school rules, which means a larger strike zone and yes, even spitballs, The Washington Post reports.

Though baseball didn’t impact the outcome of World War I — sports don’t really exist for their strategic import — it did, however, have a profound effect on American culture in the era, becoming a shared national pastime.

In 1917, Navy Adm. William S. Sims created a league in Ireland — at a time of deep suspicion of British activity and the U.S. military, the Post reports — drawn from U.S. troops stationed overseas.

“Through baseball, Sims attempted to show that our troops and sailors were no longer German, or Irish, or anything other than American,” David Kohnen, the director of the Naval War College’s John B. Hattendorf Center for Maritime Historical Research and one of the game’s organizers, said in an announcement to the school last week, the Post reports. “Not only did baseball provide a diversion from the horrors of war, but baseball also demonstrated a unique American identity.”

The league even proved popular enough to attract future greats, from Hall of Famers Oscar Charleston, Ty Cobb and Christy Mathewson, who served in the Army, to Herb Pennock and Casey Stengel on the Navy side.

Despite the amusing nostalgia of the affair — and the benefits of attending a free 1917-themed ballgame, which better have $0.05 Cracker Jacks — it’s a reminder of the greater role baseball, and sports in general, can play as a unifying all-American pastime.

“There’s no way we can understand World War I unless we first consider the history of it in all respects,” Kohnen told the Associated Press. “Baseball is part of the story of the American experience during the First World War.”

The game begins at 4:30 p.m. at Newport’s Cardines Field — one of the oldest ballparks in the country — free of charge. Just a word to any would-be Archibald “Moonlight” Grahams out there: If you swagger up to the plate and wink at the pitcher, watch out you don't get killed.