Billy Beane, the number-one draft pick in 1980, was a victim of bad talent management. Signed for the New York... 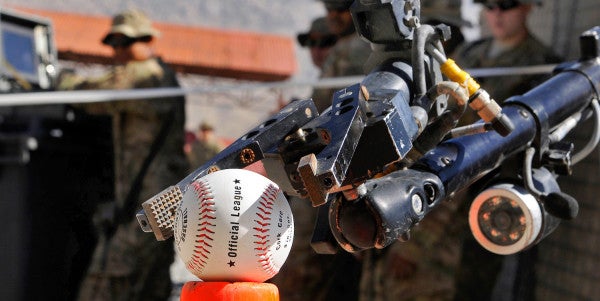 Billy Beane, the number-one draft pick in 1980, was a victim of bad talent management. Signed for the New York Mets out of high school, talent scouts thought they had found a naturally gifted athlete. But just a decade later, Beane’s career sputtered and died. He didn’t have the right stuff.

Beane would later serve as the general manager of the Oakland Athletics, where, with the help of statisticians known as sabermetricians, he built one of the most successful teams in Major League Baseball despite having just one-third the budget of the New York Yankees. Beane’s story was later turned into the New York Times bestselling book, “Moneyball: The Art of Winning an Unfair Game” in 2003, and into a movie starring Brad Pitt in 2011.

The U.S. military has used “Moneyball” metaphors for everything fromcounterinsurgency theory togrand strategy. But few have explored how baseball applies to recognizing, rewarding, and recruiting talent.

Traditional talent scouts knew baseball as well as a barroom drunk knows politics — not well, but that never stopped them from talking about it ad nauseam.

For decades, baseball scouts judged players on subjective, and grossly flawed, traits like raw speed, throwing style, and in many cases, a player’s physique. Even statistics like batting averages and runs batted in were flawed.

Sabermetricians disproved much of the talent scouts’ conventional wisdom. Stolen bases, hit-and-run plays, and bunts may have amazed the old-time scouts, but big data proved they were counterproductive.

Sabermetricians determined the best indicator of a player’s value was the number of walks he drew. Players who drew walks could be signed cheaply, allowing Beane and the Oakland A’s to recruit talented players for just a fraction of the cost. The result was a team which led Major League Baseball in wins during the 2002 season.

In the Army, every leader is a talent manager. The problem is, we’re woefully unprepared to assess talent. Even leaders with decades of military experience revert to anecdotes, amateur psychology, and a handful of interactions when evaluating subordinates. Like baseball talent scouts, we can talk for hours about what we think talent is, but we rely more on feelings than facts.

A recent study by an Army colonel found that officers with higher cognitive abilities were promoted less often than those with average mental aptitudes. And just as in baseball, there are plenty of flawed objective ways to evaluate a soldier’s talent.

In 2015, the Army deemed that Lt. Joseph Riley, a Rhodes Scholar and one of the top ROTC cadets in the class of 2013, to be in the bottom 10% of his peers. The reason? He had less time as a platoon leader than his peers, owing to his two years at Oxford. Fortunately, Army Chief of Staff General Mark Milley intervened to prevent Riley from being booted from the Army. But how many soldiers like Lt. Riley slip through the cracks?

By every measure, Jackie Robinson was one of the greatest players in baseball. But Robinson’s greatest contribution to the game wasn’t on the field, but rather, breaking baseball's long-standing color barrier, paving the way for thousands of African-Americans and other minorities to enter the sport. And while diversity is certainly a moral imperative, it also makes for good recruiting sense, as statistician Nate Silver points out in the book, “Baseball Between the Numbers.”

In 1940, baseball’s talent pool was relegated to just over 100 million white Americans and a handful of Cubans. By 2005, however, Major League Baseball could draw from a pool of over 700 million people in 10 nations, the majority of whom weren’t white. Each professional baseball player today is almost literally nearly one-in-a-million.

Diversity matters in military recruiting as well. In 2012, the U.S. Army’s Recruiting Command estimated that less than a quarter of Americans between the ages of 17 and 24 met the minimum standards to enlist in the Army. In other words, the Regular Army and Army Reserve have to recruit 96,000 prospective soldiers from a population of 7.7 million Americans every year.

A third of those (just 2.3 million, or 7% of the youth population) make up what Army’s Recruiting Command called the “prime market” for recruiting: Prospective recruits who are physically fit, have no criminal records, have earned a high school diploma, and score above average in mental aptitude tests. In 2013, that “prime market” was also exclusively male, as only men could fill much-needed slots in combat-related fields.

Today the “prime market” has nearly doubled to 4.2 million Americans thanks to full integration of women into combat roles. As the number of Americans eligible to serve continues to dwindle, the military will have no choice but to pick the best qualified soldiers regardless of gender, race, or sexual orientation.

Marines and sailors with 2nd Battalion, 8th Marine Regiment, compete in a softball game as part of the 2/8 Olympics.U.S. Marine Corps photo by Cpl. Marco Mancha

What got you here won’t get you there.

Baseball isn’t won on the ballfield, it’s won in the boardroom. A multi-billion dollar industry, Major League Baseball echoes modern war in that it’s fought at the tactical level (scoring hits and winning games), operational (coaching teams and winning seasons), and strategic (building a financially successful franchise). Beane may have been a lackluster player, but he was a shrewd manager. Indeed, few successful players become skilled managers, and vice versa — the skills required for both are just too different.

In the military, however, leaders must prove themselves adept at tactics before moving on to strategy. But just as in baseball, successful tactical leaders don’t always make great strategic leaders. Army War College students, generally colonels who have been successful in tactical assignments, score low on traits such as openness — that is, being receptive to disagreement and debate. In tactical units, subordinates generally follow orders or else they’re subject to punishment. But strategic leadership requires different skills, as military leaders work with other government agencies, non-government organizations, foreign militaries, and of course, navigate the halls of Congress. In strategic assignments, leaders may have to lead when they’re not formally in charge — in other words, through the power of ideas and persuasion.

Generals Dwight Eisenhower and George Patton provide useful case studies. Patton was certainly a master tactician: He participated in Pancho Villa campaign, was decorated during the First World War, and gained great notoriety as a field commander during the Second World War. Eisenhower, by contrast, missed the First World War and languished for nearly 16 years as a major, serving in staff assignments. When the United States entered the Second World War, however, Eisenhower’s career skyrocketed, far outpacing that of Patton, who graduated from West Point six years before Ike. Patton may have been a master tactician, but Eisenhower’s experiences made him the right man to serve as the supreme allied commander — a position he held despite never having seen combat.

Baseball doesn’t explain everything, though.

While professional baseball offers plenty of lessons for talent management, it’s worth noting that military organizations are not baseball teams. Some observers have called for a system allowing commanders to “bid on talent,” not unlike businesses do. Doing so, however, overlooksthe cycle of talent management inherent in baseball: The richest teams pay top dollar for the best talent, and the best talent generally generates more revenue. Billy Beane and his band of sabermetricians may have beaten the system, but most teams don’t.

Baseball fans accept that some teams are haves while others are have nots. We can’t, however, accept have-not battalions, squadrons, and ships. Every commander wants the best subordinates and every subordinate wants the best leaders. But which organizations would be forced to do without the best talent?