6 WTF Moments From The Commander-In-Chief Forum 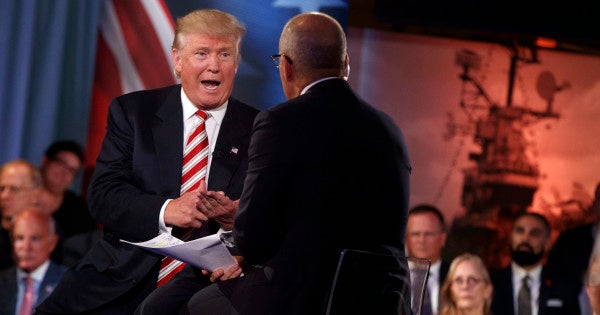 On Wednesday night, presidential candidates Hillary Clinton and Donald Trump addressed an audience of veterans during NBC’s Commander-in-Chief Forum. Moderated by NBC’s Matt Lauer, each presidential candidate answered questions from both Lauer and the audience on national security, foreign policy, and their stances on military and veterans issues. The town hall event, which was hosted by Iraq and Afghanistan Veterans of America at the Intrepid Sea, Air & Space Museum in New York City, offered a preview of things to come with the debates. There were also several times when you just had to ask, “what the fuck?”

Here are six “what the fuck” moments elicited from both candidates.

1. Hillary Clinton condescendingly talked at an audience member who asked the first question of the night. The retired naval flight officer asked how can she expect those have held security clearance to have any confidence in her leadership when she “clearly corrupted our national security.”

2. Clinton cut off Lauer and insisted on finishing her answer to his question on whether she would use military intervention if Iran cheated on the nuclear deal.

4. Trump suggested that, as president, he might fire some of the top generals now running the military. Trump said that when he seeks military generals’ advice on how to defeat ISIS “they’d probably be different generals, to be honest with you.”

Trump says he'll "probably have different generals" if he wins the presidency.

That's not how the military works. #CICForum

5. Trump wrongly corrected a female veteran who accurately referenced that 20 veterans are dying by suicide every day. “It’s actually 22,” he said.

6. Trump defended his 2013 tweet that 26,000 sexual assaults and 238 convictions in the military is what you get when you stick men and women together. He also said, “The best thing we can do is set up a court system within the military. … Right now the court system practically doesn’t exist.”

26,000 unreported sexual assults in the military-only 238 convictions. What did these geniuses expect when they put men & women together?