How Mattis Could Actually Become President

An anonymous group of conservative billionaires have reportedly taken it upon themselves to try to draft retired Marine Gen. James... 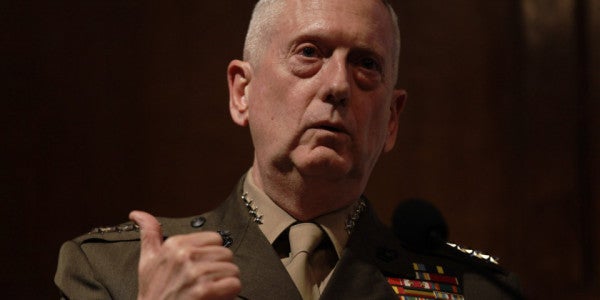 An anonymous group of conservative billionaires have reportedly taken it upon themselves to try to draft retired Marine Gen. James Mattis into the presidential election.

According to the Daily Beast’s Tim Mak, who broke the story on April 8, the group’s plan is a long shot that depends on three things. First, Mattis would need to declare himself as a candidate, so that he can seize enough electoral votes to prevent anyone from winning outright. Then it would be up to Congress to choose the next president, and the group believes Mattis would be their first pick.

The first hurdle is getting Mattis to run for office.

Known for his frank and candid language the retired commander of Central Command has stated on numerous occasions that he has no intention of running for office. Earlier this year, when asked by the Daily Caller, Mattis dismissed the idea of running for office as “idle talk.”

“I’ve lived a very colorful life and I’ve said some things,” Mattis said to an audience at Columbia Basin College in Washington last year. “But not once have I taken them back, and I’ve never apologized for them—and I won’t. I like the enemy knowing there are a few guys like me around.”

That hasn’t stopped people from trying to force him into politics. Mattis is an incredibly popular figure among younger service members and veterans, and memes reading “Mattis 2016,” began circulating online as far back as 2012.

The group believes that if the presidential race comes down to Hillary Clinton and Donald Trump, that Mattis may agree to step in as a third party candidate.

“But I do think this race is serious enough, and Donald Trump’s foreign policy is worrisome enough, to make him consider it,” John Noonan, a former adviser to Jeb Bush and one of the leaders of the group trying to get Mattis elected told the Military Times. “Mattis is almost so good that this election might not deserve him.”

The chances of Mattis actually winning the White House outright are slim to none, so instead the group is counting on a different strategy.

The goal wouldn’t be to win the election, just to deny the two frontrunners the 270 electoral college votes they need in November. If that were to happen, the decision would fall to Congress, and Mattis’ unnamed backers are confident the decorated Marine would get the nomination.

“The theme of 2016 is ‘all bets are off’ and this is a cycle where the unexpected has become the defining characteristic of this election,” Rick Wilson, a strategist involved in the project, told the Daily Beast. “In a moment when American politics on the left and right has been upended, and where the frontrunners of both parties are compromised, the time may be upon us where a uniquely qualified, and uniquely credible third-party alternative like General Mattis can take the stage.”

If that scenario were to actually unfold, the strategists reason that Mattis could be the consensus choice.