Tim Kennedy Explains What He Thinks Of Mattis As SecDef

Former UFC fighter Tim Kennedy retired from the Octagon in 2017, but he is ready and raring to dish out... 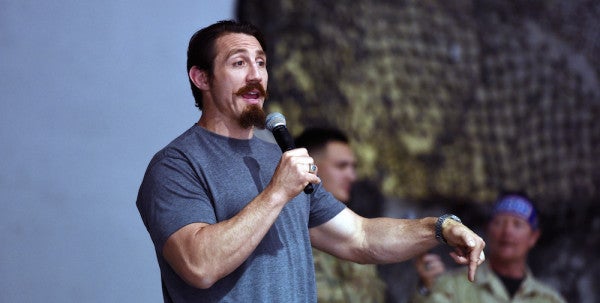 Former UFC fighter Tim Kennedy retired from the Octagon in 2017, but he is ready and raring to dish out pain under the command of retired Marine Corps Gen. Jim Mattis.

Mattis — now the secretary of defense — and Lt. Gen. H.R. McMaster, the current national security advisor, were key motivators in Kennedy’s decision to re-enlist as an Army Green Beret after eight years in the Texas National Guard.

“When Donald Trump starts putting guys like Gen. Mattis and Gen. McMaster in my chain of command, dude, let me tell you how good my life is about to get,” Kennedy told TMZ Sports. “I’m pumped to work for these guys.”

Kennedy, who served on active duty with Special Forces from 2004 to 2009, transferred to the Texas Guard while pursuing his MMA career.

Kennedy told TMZ he was thrilled about the recent change in posture regarding U.S. national security strategy.

“[Mattis and McMaster] are brilliant strategists,” Kennedy said. “They are the leaders that we haven’t had for 70 years.

With two leaders of that caliber guiding the military, Kennedy believes national security strategy is headed in the right direction, particularly in Syria.

“You dropped chemical weapons on some kids and women, we’re going to shoot 60 Tomahawks at your face,” he said. “It’s not like lip service.”

But more than anything about his decision to reenlist, Kennedy says he’s excited to win.

If Hillary Clinton had won, Kennedy said he might have had a different outlook on returning to the battlefield. “I couldn’t imagine having to work like that for another four to eight years,” he said.

To prove that he’s ready to fight, Kennedy took TMZ on a tour of his home to show of the arsenal he’s accumulated over the last few years.

Look out, ISIS: Kennedy is locked, loaded, and ready to bring the pain to your doorstep.