If Mattis Is Mad About $28 Million Wasted In Afghanistan, He Hasn’t Been Paying Attention

On Monday, the Associated Press obtained a July 21 memo from Secretary of Defense Jim Mattis in which he chided... 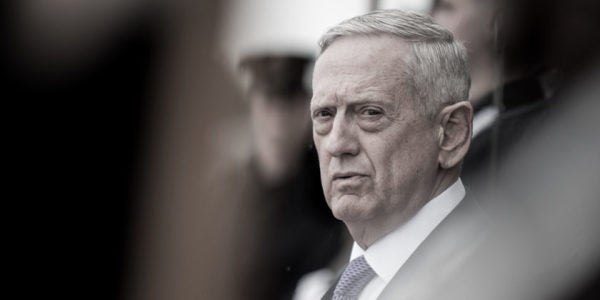 On Monday, the Associated Press obtained a July 21 memo from Secretary of Defense Jim Mattis in which he chided the Pentagon for “cavalier” spending in Afghanistan. Specifically, he was angered that the Pentagon sunk $28 million over a decade into forest-print uniforms for Afghan soldiers — a camouflage pattern that makes little sense in the desertlike theater.

Mattis called the botched uniform buy “an example of ‘cavalier or casually acquiescent decisions’ that undermine the mission in Afghanistan and undercut public trust,” the Associated Press reported.

But the thing is, in the grand scheme of mismanaged money in Afghanistan, $28 million is nothing.

As far back as 2014, John Sopko, the Special Inspector General for Afghanistan Reconstruction, said that US efforts to fix the nation’s infrastructure have been “an abysmal failure.” The Afghan uniform issue is just the latest in a string of bad spending decisions made with regard to Afghanistan. In 2016, NBC News caught up with Sopko, who listed 12 different instances in which the Pentagon wasted money in the war.

These failures include a $34 million spend on a soybean program for a population that doesn't eat soybeans; $36 million on the “64K” command-and-control facility at Camp Leatherneck that officials deemed unnecessary (after it was built); $82 million on incinerators that were never used; and $335 million on a power plant that only produced 1% of its promised capacity.

Between 2001 and 2016, Sopko said that $113.1 billion has been poured into Afghan reconstruction — at least $10 billion more than the entire cost of post-World War II reconstruction. And we are nowhere near finished in Afghanistan.

“We have to remember why we are there in Afghanistan. We are there to kick the bad guys out and then to help create an Afghan government that will get the support of their people to keep the bad guys out,” Sopko told an interviewer in 2015.

But, he added, “You lose that support when you build things that fall down.”