Mattis: Afghan Forces Are Increasing Their Efforts To Stop ‘Green On Blue’ Attacks

Afghan security forces have stepped up training and vetting of troops and police who work with U.S. service members to... 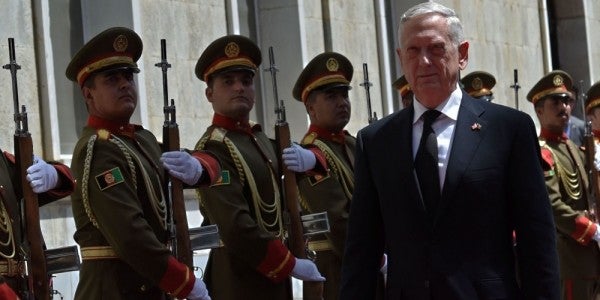 Afghan security forces have stepped up training and vetting of troops and police who work with U.S. service members to stop “Green on Blue” attacks, Defense Secretary James Mattis told reporters on Tuesday.

“They’re bringing in more people that we have helped train to know how to do it, to make certain that we’re catching people who have been radicalized,” Mattis said during a Pentagon news conference. “There’s a lot of attention from their military side that’s actually in the field with the troops. By ‘attention,’ I mean training of their people at how they protect the coalition troops.”

“President Ghani broached the issue first,” Mattis said on Tuesday, which marked the 17th anniversary of the Sept. 11 terrorist attacks. “Of course, it was on my list of issues to bring up. He brought it up both in my private one-on-one meeting as well as with his entire staff and our ambassador and senior NATO civilian representatives and our military and diplomatic staffs.”

Mattis flew from New Delhi to Kabul last week and met with Army Gen. Austin Scott Miller, who recently took command of U.S. troops in Afghanistan. His discussions with Miller and Ghani included how to protect Afghanistan’s upcoming parliamentary elections, which are scheduled for October as well as, “How do we sustain this effort into the future as we look toward reconciling Afghanistan.”

The Taliban have sent mixed messages recently by escalating violence around Afghanistan while some leaders have shown an increased interest in reconciling with the Afghan government, Mattis said. It is not yet clear whether a peace process has the necessary momentum, “so we’ll fight,” he said.

For years, the United States has given the Taliban three conditions for peace: Stop killing people, abide by the Afghan constitution, and break with all terrorists, Mattis said. Although the Taliban still remain connected to al Qaeda, some younger fighters recently defied the Taliban’s senior leadership and accepted a cease-fire earlier this year.

Mattis noted that next year marks 40 years since the Soviet invasion of Afghanistan, which begat decades of relentless bloodletting. From his discussions with Afghan leaders, Mattis got the impression that the desire for peace is widespread.

“Forty years is enough,” Mattis said.“I think there’s a fair amount of what I would call ‘non-quantifiable factors’ that are mounting in terms of going in the right direction. We’ll just have to do everything we can to protect that process with our military might, the 41 nations that have got military people there in the fight, and then continue to buttress what the diplomats are doing.”