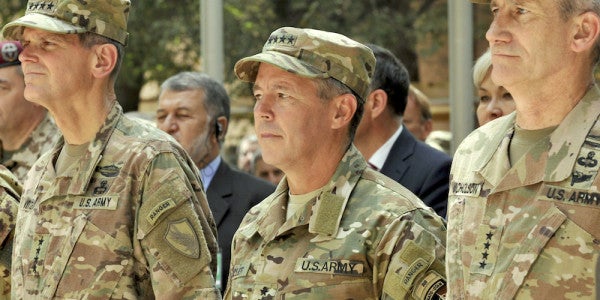 An apparent insider attack has essentially wiped out the top leadership of Afghanistan's Kandahar province.

Kandahar's police chief, Gen. Abdul Raziq, and intelligence chief were killed in the attack, according to The New York Times. Initial reports suggested that the provincial governor, Zalmay Wesa, was also killed, but he is currently being treated “at a Resolute Support treatment facility,” a spokesman said.

One of the governor's bodyguards reportedly opened fire after a meeting at the governor's office, according to Afghanistan's TOLO News. The Taliban claimed responsibility for Thursday's attack, which it said targeted top American commander Gen. Austin “Scott” Miller, who was present at the meeting.

“There was a situation at the Kandahar palace today. Initial reports indicate this was an Afghan-on-Afghan incident,” Peters said.

Peters’ colleague Army Col. Dave Butler tweeted that one U.S. service member and two contractors had been wounded in the shooting. One of the contractors is American. They were listed as stable and had been medically evacuated. Butler also said the attacker was dead.

Butler, who witnessed Thursday’s shooting, disputed the Taliban’s claim that they had targeted Miller.

In a series of tweets, Butler said the U.S. personnel were wounded in the crossfire.

The attack was outside and the gunman aimed at Afghan officials.

The Afghan Ministry of Defense did not immediately respond to a request for comment from Task & Purpose.

Butler tweeted a statement from Miller on Thursday about the death of Raziq, an important U.S. ally in southern Afghanistan.

“Today I lost a great friend Lt. Gen. Raziq,” Miller said. “We had served together for many years. Afghanistan lost a patriot, my condolences to the people of Afghanistan. The good he did for Afghanistan and the Afghan people cannot be undone.”

Correction: An earlier version of this story said the Kandahar Governor had been killed. The story has been updated to reflect that he was wounded, and is currently hospitalized.