The U.S. Army general who was wounded during an insider attack in Kandahar last week has been medically evacuated to... 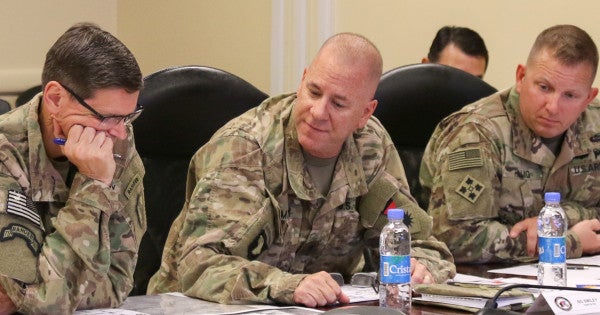 The U.S. Army general who was wounded during an insider attack in Kandahar last week has been medically evacuated to the United States for further treatment, a spokesman for the NATO Resolute Support mission told Task & Purpose on Thursday.

Brig. Gen. Jeffrey Smiley, the commander of Train, Advise, Assist and Command – South, was hit by gunfire during an attack last week reportedly carried out by the Kandahar governor’s bodyguard, who killed the Kandahar police chief, intelligence chief, and wounded the governor.

Smiley was being treated for a gunshot wound at a military hospital in Kandahar, as Task & Purpose previously reported. He was later moved to Germany for follow-on treatment and is now back at Walter Reed National Military Medical Center in Washington, D.C., said Navy Lt. Cmdr. Grant Neeley, an RS spokesman.

With Smiley out of Afghanistan, command of TAAC-South had temporarily fallen to his deputy, Army Col. David Zinn. On Thursday, Australian Army Brig. Gen. John Shanahan arrived in Kandahar and has taken over as acting commander, Neeley said.

Smiley has served more than 30 years in the military, first joining as an enlisted Marine in 1983, according to an official biography.

He transitioned to the Army National Guard in 1987 and has taken on a variety of leadership roles since. He was promoted to brigadier general in May 2017 and took command of TAAC-South in August.

A general officer becoming a casualty in Afghanistan is an exceptionally rare occurrence. In 2011, German Army Gen. Markus Kneip was wounded in a suicide attack in Taloqan, and in 2014, U.S. Army Gen. Harold Greene was killed by an insider attacker in Kabul, making him the highest-ranking casualty of the Afghan War.

In addition to Smiley, two NATO contractors were also wounded in the shooting.

The Taliban claimed responsibility for last Thursday’s attack, which it said targeted top American commander Gen. Austin “Scott” Miller, who was also present at the meeting (Miller was not injured by the gunman).