Reporter To Dunford: ‘2010 Called’ About Your Afghan Strategy

Chairman of the Joint Chiefs of Staff Marine Gen. Joseph Dunford insists that the U.S. strategy for Afghanistan is showing... 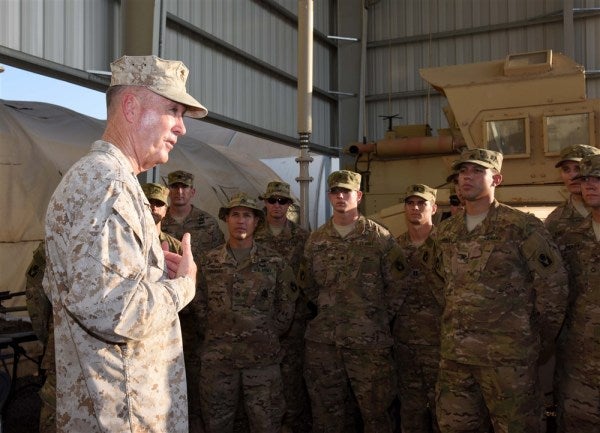 Chairman of the Joint Chiefs of Staff Marine Gen. Joseph Dunford insists that the U.S. strategy for Afghanistan is showing results, but one reporter said Dunford’s remarks don’t pass the smell test.

The tense exchange came while Dunford was speaking Friday at the Military Reporters and Editors 2018 Conference in Arlington, Va. Dunford said the Afghan security forces had made great progress and political efforts to get the Taliban to join a reconciliation process are making headway.

“I hear your Afghanistan answer, and with all due respect I think: 2010 called; it wants its talking point back,” Military Times reporter Geoff Ziezulewicz told Dunford. “We’ve been hearing reconciliation since then. You speak about progress in [Afghan national security forces], but the Pentagon has moved to make those numbers not publicly available anymore.”

Ziezulewicz also criticized the Pentagon for being opaque on the total number of U.S. troops in Afghanistan and for not announcing when aircraft carriers and other ships leave port for a deployment.

“OK: First, let me politely, professionally, but strongly push back on your thesis about Afghanistan,” Dunford replied, with a decided edge to his voice.

Dunford argued that the U.S. counter-terrorism mission in Afghanistan needs to continue because it has made it harder for Al Qaeda terrorists. He also claimed that although the total number of U.S. and NATO troops in Afghanistan has dropped from 140,000 to 15,000 since 2013, the security situation in Afghanistan has not deteriorated markedly in the past five years.

The Afghan air force has also come a long way since 2010, he said. Now Afghan pilots fly the “vast majority” of missions in support of Afghan troops and police. Success in Afghanistan is not around the corner, he continued. The fight there is about “making incremental progress over time.”

“I’m not arguing with you, but I think what you’re really highlighting is not so much a difference of opinion as a difference in the perspective,” Dunford said. “From where I sit, I see things differently than from where you sit. I’ve never once — even when I was there — never once promised something we didn’t deliver. I never once overestimated where we were relative to where we needed to be. And I never once said: Hey, just around the corner is something beyond where we are right now.”

Dunford also pushed back on Ziezulewicz’ arguments that the Pentagon was concealing information. For example, the reason the Defense Department no longer releases data about Afghan security forces – including casualty figures – is that Afghan President Ashraf Ghani did not want the information made public (the numbers had been published regularly until 2017).

“Look, I’m trying to do the best I can,” Dunford told Ziezulewicz. “Every trip, I bring reporters with me and I’m here today. I can’t fix all the problems that you may see, but I’m just telling you I’m doing the best I can to maintain a dialogue. It is inherently difficult to do.”

Dunford’s relatively optimistic appraisal of the situation in Afghanistan stands in stark contrast to recent catastrophic news coming from the country.

Army Brig. Gen. Jeffrey Smiley, who led the training effort in southern Afghanistan, was medically evacuated to Walter Reed National Military Medical Center in Washington, D.C., after being shot during an Oct. 18 insider attack that killed the head of Afghan police in Kandahar province, a vital U.S. ally. The top U.S. commander in Afghanistan narrowly avoided getting injured or killed himself in the same attack. Meanwhile, two U.S. soldiers have been killed in separate insider attacks this year.

Marine veteran James LaPorta, now a reporter with Newsweek, pressed Dunford on what he tells Marines and soldiers who have deployed to Afghanistan several times and seen no improvement in the security there.

Dunford said he tells troops that Afghan security forces did not have enough support from the United States and coalition during the troop drawdown, but since 2017 the U.S. military has changed how it advises and assists Afghan troops and police, and it has increased the level of air and intelligence support that it provides the Afghans.

“So, if you’re back in Kandahar today, you’re not going back in to clear the same ground you cleared in 2013,” Dunford said. “You may very well be supporting your Afghan counterpart in clearing that same ground.”

“Trying to close the gap between me and a grunt who’s actually out there on a fourth deployment is something I take seriously, but it’s a very difficult thing to do,” he added.

“While I can’t prove it, I believe in my bones that the pressure that we have put on Al Qaeda since 9/11 – the platform from which we have conduced counter-terrorism operations in South Asia being Afghanistan – has made a difference to our security back home. I believe that, and if I didn’t believe that, I wouldn’t be doing what I’m doing.”

SEE ALSO: Afghan Governor: The Taliban Are ‘Going To Win’ If Death Toll Continues To Rise