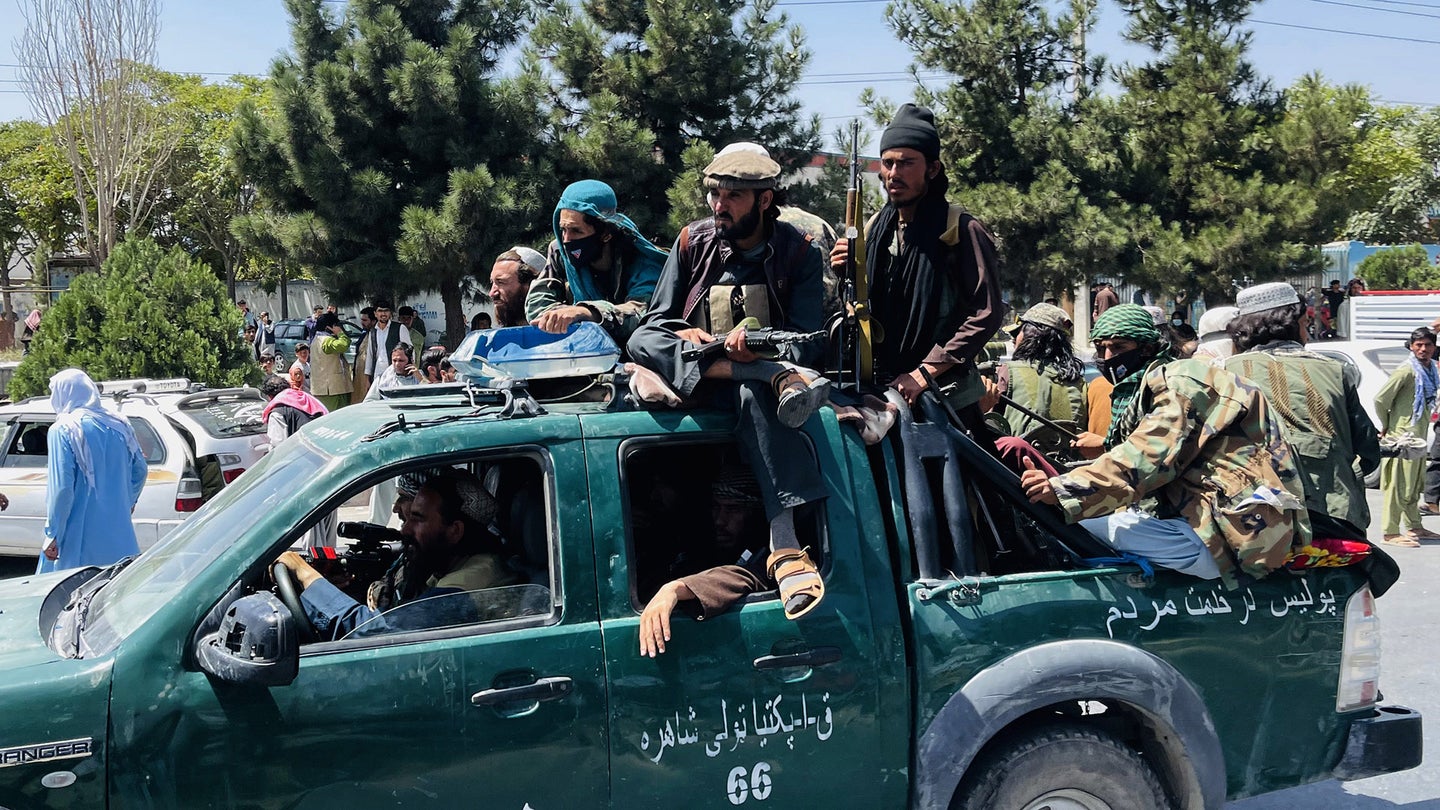 On Thursday, an Afghan man who was recently placed on the U.S. government’s evacuation list received an email from the State Department instructing him to go to Hamid Karzai International Airport’s East Gate.

The former interpreter, who served with coalition forces and then worked for a U.S. medical evacuation company, dutifully went to the east gate along with his family. Their deliverance, it seemed, had finally arrived.

But in a scene that is all too common for people trying to get out of Afghanistan, the man was unable to pass through a Taliban checkpoint outside of the airport’s gate. He sent Task & Purpose a video showing Taliban fighters, some in former Afghan police cars, blocking the path of men, women, and children. After nearly three hours of waiting, he and his family went home.

Another Afghan man sent a video to Task & Purpose purportedly taken Thursday outside of the airport showing the Taliban and possibly Afghan troops firing dozens of rounds as Afghan families with children cowered in a shallow ditch for protection. This man has also asked for help leaving the country.

The Taliban can open and close the spigot of refugees streaming to Kabul’s international airport at will. Defense Secretary Lloyd Austin said on Wednesday that U.S. troops at the airport are not going to pick up large groups of people in Kabul and transport them to safety, so Americans and Afghans trying to get to the airport must find agreeable Taliban fighters who will let them pass and a gate to the airport that is open.

So far, the Defense Department is unaware of incidents of the Taliban not letting American citizens into the airport, Pentagon spokesman John Kirby said on Thursday. But Kirby added that the military is not aware of everything that is going on in Kabul right now.

“So I can’t say definitively that they aren’t stopping and/or harassing people with U.S. passports or visas,” Kirby said at a Pentagon news briefing.

When Task & Purpose asked what steps the Defense Department can take to make sure that Afghans could get through Kabul airport’s east gate, Kirby said U.S. military commanders will continue to tell the Taliban that people with proper credentials should be allowed onto the airport.

“We are mindful that the checkpoints there can be obstacles to entry for people that need entry and are qualified for entry,” Kirby said. “So, we’re going to continue to work this with our communications with the Taliban in the hopes that we can clear up any stumbling blocks to that processing.”

So far, defense officials have not said publicly how many Americans and Afghans who worked for the U.S. government need to be evacuated by Aug. 31, the end date for the U.S. military’s mission in Afghanistan. Although President Joe Biden indicated U.S. troops could remain in Kabul beyond the end of the month to keep rescuing Americans when he told ABC News’ George Stephanopoulos in a recent interview, “If there’s American citizens left, we’re gonna stay to get them all out.”

Defense officials have said the U.S. military could eventually fly between 5,000 and 9,000 passengers per day out of Kabul, but evacuation efforts so far have not come close to that amount.

Since the non-combat evacuation began on Aug. 14, about 7,000 people have left Afghanistan on U.S. government flights, including roughly 2,000 Americans and Afghans in the past 24 hours, Kirby said.

It is becoming increasingly clear that the factor driving how many people can be rescued is not how many planes take off from Kabul per day, but how many Americans and Afghans can get through the airport’s gates.

A single Air Force C-17 Globemaster III can be configured to carry up to 300 passengers, Kirby said. In a rare feat, a C-17 managed to take off from Kabul on Sunday with 640 Afghans aboard, Tara Copp and Marcus Weisgerber of Defense One first reported.

Between Wednesday and Thursday alone, a total of 12 C-17s took off from Kabul, said Army Maj. Gen. William Taylor, deputy director for regional operations and force management for the Joint Chiefs of Staff.

Kirby stressed Navy Rear Adm. Vasely, the U.S. military’s top commander in Kabul, continuously talks to the Taliban about any problems with getting people into Hamid Karzai International Airport.

When Task & Purpose asked what actions the U.S. military might take if diplomacy with the Taliban fails, Kirby declined to speculate on any future operations.

“I can just assure you that the mission assigned is about safety and security at the airport and air operations at the airport,” he said. “That is what we are trying to manage so that we can help move as many people out as possible.”