'Normally I’ll hate on officers for getting praised for simple normal people shit, but this is kind of cool.' 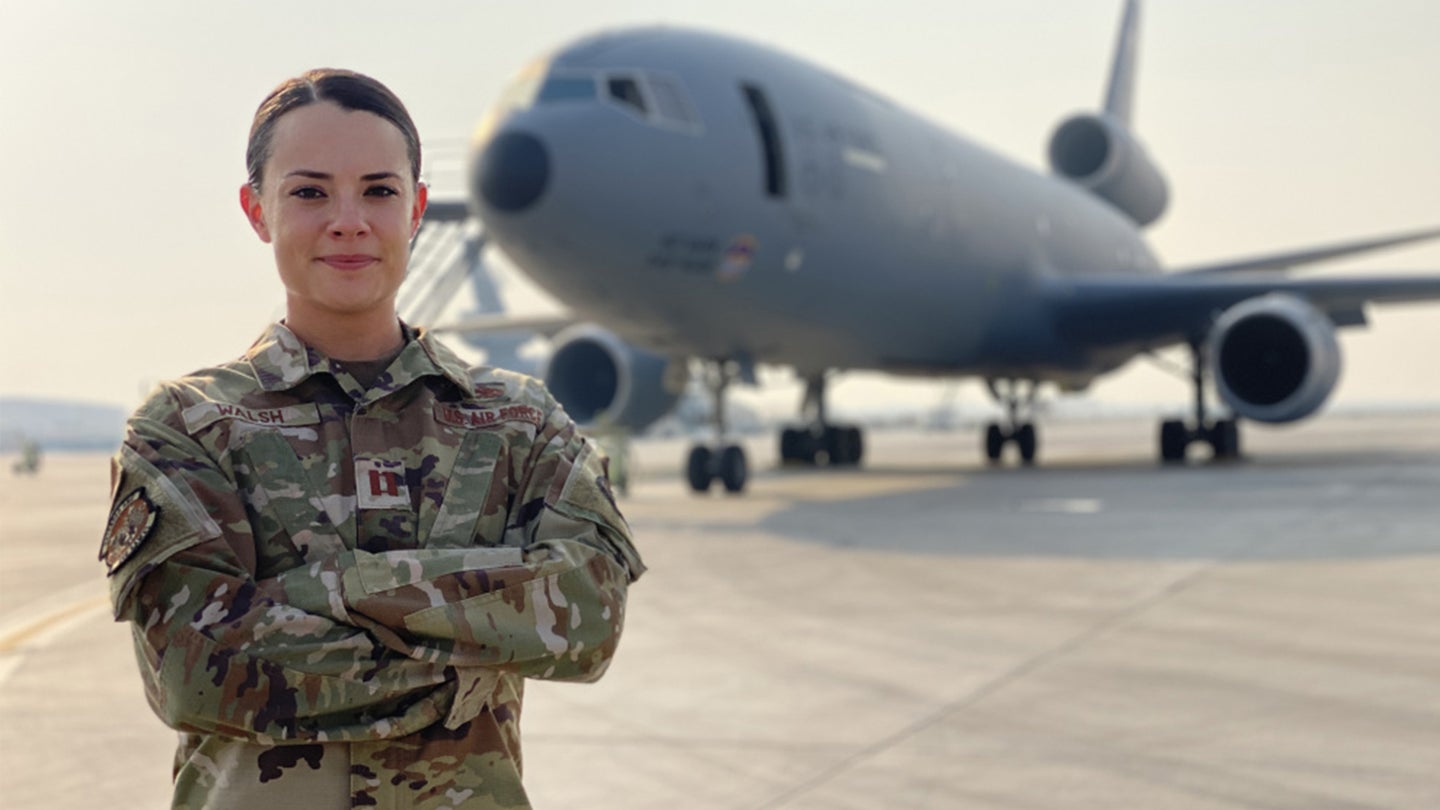 The Air Force lauded an aircraft maintenance officer who took it upon herself to service the lavatory (also known as sucking the poop out) aboard an aircraft in her charge last month, a task typically performed by enlisted airmen.

Capt. Erin Walsh, of the 380th Expeditionary Aircraft Maintenance Squadron stationed at Al Dhafra Air Base, United Arab Emirates, was praised for being “willing to step out and lead from the front,” by learning how to service the lavatory aboard a KC-10 Extender, an aerial refueling tanker that can also carry cargo and passengers.

Walsh had almost eight years of maintenance experience before coming to Al Dhafra. However, those were exclusively on fighter jets, such as the F-35A Lightning IIs, F-22A Raptors, F-15E Strike Eagles and F-16C/D Fighting Falcons, which do not have bathrooms on board. The KC-10 is the first aircraft Walsh has worked on that actually has a toilet.

“Servicing the lavatory was a first time experience for me,” she said. “You have to experience some of the dirtier jobs to be able to relate to and respect what the airmen go through every day.”

I’m no expert, but it sounds like what Walsh did checks off the “job proficiency,” “initiative,” and “teamwork” boxes on the airman leadership qualities which were published in February. Still, it’s hard not to chuckle when the Air Force honors an officer for doing something enlisted airmen do every day. It’s almost like different thanks for different ranks.

“So an officer does something that everybody else has to do anyways and they write an article on it?” wrote one commenter on the popular Facebook page Air Force amn/nco/snco.

But believe it or not, most commenters applauded Walsh for what she did.

“When’s the last time anyone has heard or seen an officer go out and help with maintenance or say hello to the maintainers?” wrote one. “Let alone do something like this. Kudos to Captain Walsh.”

“Normally I’ll hate on [officers] for getting praised for simple normal people shit, but this is kind of cool,” wrote another.

It’s even cooler considering how gross servicing a toilet on an aircraft can be. Air Force photos show Walsh gearing up in a protective suit and a face mask before doing the dirty task. What you don’t get from the photos is how hot it must have been on a flight line in the UAE in July, and how smelly the lavatory is.

“The lavatory does get exceptionally bad after a long flight,” said retired Col. David LeRoy, who flew KC-10s for 20 years during his Air Force career and once commanded a KC-10 squadron at Al Dhafra. “It’s like a porta-john: the more you use it, the worse it gets.”

The KC-10 extender is essentially a regular civilian airliner converted to refuel other airplanes or carry cargo, LeRoy explained. That means the lavatory smells the same after a long flight, and adding desert heat makes the odor a little more pungent.

“As you can imagine, anything heated up is worse,” LeRoy said, and others agreed with him.

Servicing the aircraft lavatory is one of many unseen tasks that are essential to keeping aircraft safe and airworthy, but which often go unrecognized. It’s a task that often falls to fleet services airmen, whose jobs fall into two categories: clean fleet and dirty fleet. Clean fleet means restocking the toiletries, water coolers, pillows, blankets, supply coffee, meals or anything else that passengers or crew may need, according to one press release. Dirty fleet, meanwhile, is responsible for taking out the trash.

“The first thing we do is take care of the international garbage,” said Jeffrey Zook, 732nd Air Mobility Squadron vehicle operator for fleet services at Joint Base Elmendorf-Richardson, Alaska in a 2016 press release.

Fleet services airmen take out the trash from international flights and burn it within 72 hours, since it could carry invasive species. Like its name suggests, dirty fleet also services the lavatory.

“When that call comes in — regardless of time or temperature — they quickly don their personal protective equipment and head out to the flight line with one of the latrine servicing trucks,” the 2016 press release said.

To clean the lavatory out safely, airmen gear up in a full body suit with boot covers, face-shield, double-layered gloves and sometimes a hood if the work requires reaching overhead, Harsh explained. Next, they back a specialized truck up to a port at the rear of the aircraft that connects to the lav system. Then the airmen open the hatch and hook up two hoses leading from the truck: one for waste and the other for water and “blue juice” a concoction of deodorizer, water and anti-ice solution which keeps the latrines clean.

Airmen cycle water through the first hose to clean the system out, then they suck the waste out through the waste hose. Finally, they go into the aircraft with a bucket of blue juice and dump it into the toilet, then clean the lav and flush to make sure everything works.

“It’s a disgusting experience,” he said, but it was not without its perks.

“We would get so bored sometimes so we’d come up with stupid ideas like servicing a plane in full MOPP gear [the bulky gear troops wear in event of a chemical attack], which was pretty fun when there isn’t anything else to do,” he said. “The job’s terrible but the people I worked with made it fun.”

The job is also essential. Otherwise, everyone on board is stuck on a flying porta-potty.

“Picture flying 15 hours and smelling the toilet the whole way,” Staff Sgt. Nicholas Jensen, 19th Logistics Readiness Squadron Fleet Services supervisor said in 2017. “You can tell if an aircraft needs to be serviced before even stepping onboard.”

Knowing how gross it is to service a lavatory, several observers praised the captain for trying her hand at it.

“Best people I’ve worked for were ‘servant leaders,’” said one Facebook commenter. “Sadly, these people never make it to the top.”

LeRoy also praised the captain, calling her an example of the “servant leadership standard.”

“My hat would be off to the officer to get out there and see what her people are dealing with on a regular basis,” he said.

There is the chance that it was just for show. For example, Harsh pointed out that during his time as an air transportation specialist, officers learned to service the lavatory “all the time to try and bump up morale,” he said. “But it’s just annoying to teach someone something just for them to make themselves look good.”

Sometimes it’s genuine though. For example, former Marine Capt. Nate Fick told Business Insider about a time in 2001 he saw Gen. James Mattis chatting with junior enlisted Marines in their foxholes in the middle of the night in Kandahar, Afghanistan.

“Nobody would’ve criticized Mattis if he had a lieutenant like me heating up his MREs and if he stayed inside to sleep on a cot,” Fick said. “But Mattis understood that it all comes down to personal leadership. He’s the classic fighter leader. He’s the player coach. He’s out there with his troops.”

It sounds like Captain Walsh is cut from the same cloth, at least according to the press release.

“The best way to lead a team is to gain an understanding and appreciation of what they do, and then do what you can in a leadership role to make their job easier,” she said.

At least one of the captain’s airmen seemed to have appreciated it.

“If she was my troop, and she was confident, I would have no problem signing her off,” said Staff Sgt. Cody Dillon, an aerospace maintenance craftsman who showed Walsh how to suck the poop out of the KC-10. “It shows me she has interest in the real goings-on outside of what she hears from the troops and her office!”