"Airmen arrive on-time to all appointment.” 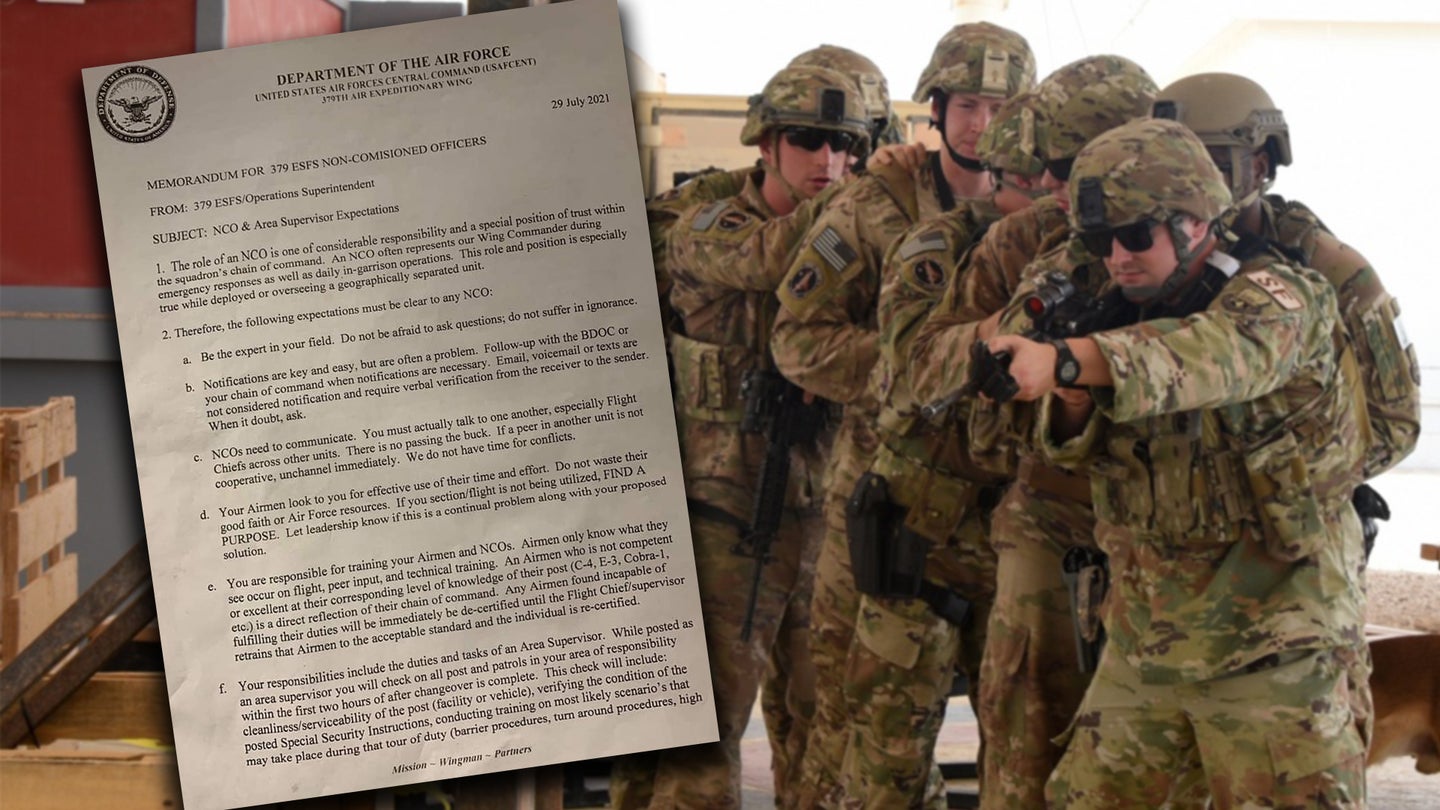 One of the Air Force’s core values is “excellence in all we do,” but everyone falls short of the mark sometimes. In particular, one senior master sergeant recently cast themselves as a model for why proofreading is important in a typo-riddled letter demanding “flawless” paperwork from their subordinates.

The letter, which was published to the popular Facebook page Air Force amn/nco/snco on Monday, gets off to a bad start with an all-caps typo right at the top.

“MEMORANDUM FOR 379 ESFS NON-COMISIONED OFFICERS,” writes the senior master sergeant, misspelling ‘non-commissioned.’ The author’s name is blotted out, but their signature says that they are the operations superintendent for the 379th Expeditionary Security Forces Squadron at Al Udeid Air Base, Qatar.

“The role of an NCO is one of considerable responsibility and a special position of trust within the squadron’s chain of command,” the operations superintendent wrote. “An NCO often represents our Wing Commander during emergency responses as well as daily in-garrison operations. This role and position is especially true while deployed or overseeing a geographically separated unit.”

The 379th Air Expeditionary Wing did not respond to a request for comment on this story. But the letter is a reminder for other NCOs and area supervisors at 379 ESFS to be all-around studs in the art of leadership. Across 11 bullet points, the senior master sergeant reminds the reader that NCOs must “be the expert in your field,” that “there is no passing the buck,” that “you are responsible for training your Airmen,” and that “Paperwork, specifically [letters of evaluation] and decorations, are expected to be flawless … Spellcheck and [decoration] Writing Guide must be used.”

The senior master sergeant could have used some of their own advice because the next bullet says “Airmen arrive on-time to all appointment.”

Besides that error, the letter also has a few misplaced apostrophes, such as “most likely scenario’s that may take place,” and two instances of “LOE’s,” where it should read LOEs.

Other errors include “When it doubt, ask,” and “see my personally,” and a few instances where the subject does not agree with its pronoun or indefinite article. For example, the senior master sergeant wrote “an airmen” where it should read “an airman,” since airman is singular and airmen is plural.

Am I being a grammar Nazi? Yes, but there’s a reason why I’m calling out this behavior when it comes from a senior enlisted airman. That’s because in the military, paperwork errors as simple as an unindented paragraph or an improperly written date can result in anything from a delayed leave request to withheld pay or decades of denied citizenship.

For example, it took one soldier, Sgt. 1st Class Cameron Corder, nearly four years to get the insurance money owed him after suffering serious back injuries while deployed as a medic to Afghanistan, according to Military Times.

“Medical officials recorded his wounds but not the specifics of when they occurred, leaving the soldier technically ineligible for the additional $100,000,” Military Times wrote.

Paperwork, like uniform and grooming standards, may be another example of the military’s emphasis on getting the little things right. If that’s the case then, a senior enlisted airman such as this Air Force senior master sergeant must hold themselves to the same standards.

“Airmen only know what they see occur on flight, peer input, and technical training,” the senior master sergeant wrote. “An Airmen [sic] who is not competent or excellent at their corresponding level of knowledge of their post … is a direct reflection of their chain of command.”

Of course, this isn’t the first time Big Blue set a bad example when it comes to double-checking paperwork. In 2014, the Air Force mistakenly issued six months of transitional medical benefits to 4,200 airmen leaving the service. Then the branch caused even more confusion when it tried to revoke those benefits.

Airmen were “angry, because they made their decision to separate based in part on bad information about their access to medical coverage,” Military Times reported.

“[G]iven the complex nature described it would be unrealistic to expect perfection,” one Air Force spokesman said at the time, in the biggest understatement of the year.

To this day, the tyranny of paperwork remains a bane of many an airman’s existence. Particularly when it comes to financial matters, as one Reddit post explains.

“I advocate for the ‘sextuple tap’ approach,” wrote one commenter on the Air Force subreddit. “Send paperwork via email. Call them about it. Save a soft copy. Save a hard copy. Hand carry a hard copy to their service desk. Finally, gain access to their alpha roster and then hand deliver hard copies to their personal residences. Always works. Trust me, bro.”