“I just felt utterly compelled that this is what I was being called to do.” 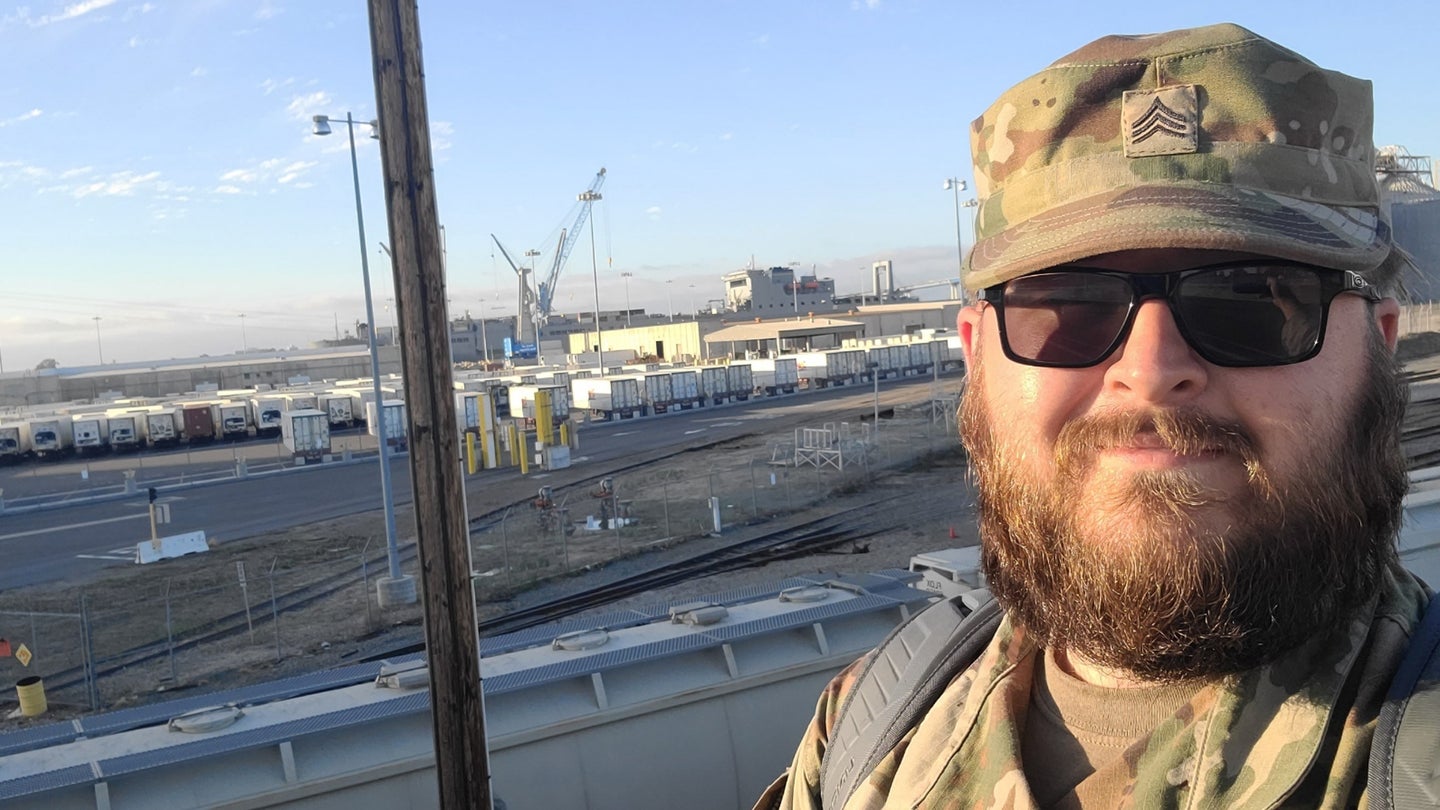 Almost two years after making his first request for a religious accommodation to grow his hair and beard out while in uniform, an Army sergeant has officially received the green light.

Sgt. Jacob DiPietro, a cargo specialist with the Florida Army Reserve’s 489th Transportation Company (Seaport Operations), was approved for a religious exemption to the Army hair standards this week.

DiPietro, who observes the Nazarite vow from the Old Testament in the Bible, first applied for the religious exemption in November 2019. The Bible explains that while someone is observing the Nazarite vow, “no razor may be used on their head.”

That isn’t exactly the Army way — the service has specific rules about hair length and styling, for men and women, including a strict no-beard policy. But the Army made policy changes in 2017 that made it easier for soldiers to receive religious exemptions to grow out their hair or beards by allowing the soldier’s brigade-level commander to approve the request.

“The soldier’s brigade-level commander will approve a request for a religious accommodation … unless the commander determines the request is not based on a sincerely held religious belief, or identifies a specific, concrete hazard that is not specifically addressed in this directive and that cannot be mitigated by reasonable measures,” Secretary of the Army Eric Fanning said at the time.

DiPietro is one of the first known U.S. service members to receive a religious exemption from hair standards due to their Christian faith, although in recent years the various service branches have granted exemptions for Sikhs, Muslims, and even Norse pagans in the ranks.

For years, DiPietro followed the Army standard. He joined the Army the same day he turned 18 years old in 2010, about seven years before the service allowed religious exemptions. At the time, he wasn’t observing the Nazarite vow like he is today; he just knew he wanted to be a soldier.

He’d known that much since he was in third grade when he saw the attacks on Sept. 11, 2001, unfold on the television in real-time. His third grade teacher was in the Marine Corps Reserve and was quickly called away from teaching, DiPietro said. He never saw him again, but from that point on, he knew he wanted to serve.

“That seed was planted early in my life,” DiPietro said. “I knew what I was going to do.”

DiPietro joined Junior ROTC in high school and enlisted into the Army after graduation as a Shower/Laundry and Clothing Repair Specialist. It wasn’t really what he wanted to do, he said, so he quickly moved into another job as a cargo specialist.

For the next several years, things were going well, until he returned home from a deployment to Kuwait in 2017 and began going through “a really dark time” in his personal life. He married a woman he’d been dating for years, but when she was pregnant with their first child, she left. He felt like his life was starting to crumble around him, so he decided to pray.

“I noticed that by praying, I found strength,” he explained. “By finding strength, I was able to keep fighting these personal battles of mine.”

He said his quality of life was improving; he enrolled in school to get a degree in business administration and is planning to finish his bachelor’s degree this week. His life had been changed, and in the spring of 2019, he prayed to ask God what he could do to “recognize what you have done in my life.”

“I want to show my love for you,” DiPietro recalled praying. “What can I do to do that?”

The answer came just days later. DiPietro, who was a specialist assigned to the 1186th Deployment and Distribution Support Battalion at the time, said he felt a need to read the book of Numbers in the Old Testament of the Bible, and in Numbers 6, he found the Nazarite vow.

“Speak to the Israelites and say to them: ‘If a man or woman wants to make a special vow, a vow of dedication to the Lord as a Nazirite … During the entire period of their Nazirite vow, no razor may be used on their head. They must be holy until the period of their dedication to the Lord is over; they must let their hair grow long,” the Bible says.

“I said, ‘Oh, this is it,’” DiPietro recounted. “I just felt utterly compelled that this is what I was being called to do.”

So DiPietro threw himself into research, reading and re-reading every applicable Army regulation before he submitted his request. He said he researched for six months because he knew if he was wrong “on anything, down to the periods at the ends of the sentences, the Army was going to use that as a reason to deny my request.” He finally spoke to his unit chaplain about his decision in November 2019.

He provided the chaplain with a memo he drafted in which he requested his religious accommodation. His chaplain then passed it to the company commander and first sergeant, who DiPietro said were “amazing” and supported the request. They then passed it up to the battalion level, which is when things got difficult.

DiPietro said his request was kicked back down to him from the battalion level because it hadn’t been formatted correctly. He re-formatted and re-submitted the request in December.

The request languished “in limbo” for months at the battalion level, he said, until he received a memo in June from Brig. Gen. Stephen Rutner, commander of the Army Reserve deployment support command. Rutner said DiPietro’s request “to wear a beard and uncut hair” was being approved and noted that there was no “specific hazard identified” by allowing it.

“Based on Spc. DiPietro’s request, the interviews with chaplains, coordinating agencies, and the chain of command recommendations, it appears that his request is based on a sincerely held religious belief,” Rutner’s memo said. “Despite the OCCH’s position that this accommodation lacks a ‘religious basis’ and is not a required tenet of the soldier’s faith, there is every indication that this moral decision to adhere to the Nazarite vow is a large and important pillar to his spiritual health and well-being.”

DiPietro remembered thinking how he expected it to be more difficult to get approval. “It was a painful process, but it was less painful than I thought it was going to be, so that’s nice,” he recalled.

But the next week, he said he received an email from an Army official in the Pentagon telling him that while his beard had been approved, the general who signed off on allowing him to grow his hair out didn’t actually have the authority to do so. It said he’d have to pursue the hair portion of his request separately.

By March 2021, DiPietro still hadn’t heard anything from the Army. He was getting tired of waiting, so he contacted his local congressional office and asked for their help. He asked chaplains he knew who worked in the Pentagon if they knew anyone who might be able to do something, to help him move his request forward.

And finally, on July 25, he saw a memo in his email inbox signed by Lt. Gen. Gary Brito, the head of Army personnel, approving his request.

While that battle was won, and DiPietro said he was “sincerely” thankful for everyone who “helped me and counseled me throughout this process.” The experience has made him rethink his future in the Army. He’d originally planned to stay in for a full 20 years, but the difficulty he had in getting an exemption for a religious vow he takes very seriously, and the harassment he experienced from other soldiers about his beard, have motivated him to leave the service at the end of his contract next year.

It’s a bittersweet decision since DiPietro says he knows he wouldn’t be “where I am in life were it not for the Army,” and even after everything, he knows he “wouldn’t change anything.”

“But there are things that I see and I don’t like … like the way soldiers are treated when they seek an exception to policy while following Army regulation,” he explained. “If a soldier is following the rules as set by the Army, they should absolutely be free from harassment discrimination. I feel like there’s still a culture that is, truthfully, fearful and hating towards that which is different.”

As for other soldiers who are serious about their religious obligations but are scared to ask for an exception to policy, DiPietro urged them to do their research beforehand. The only way you’ll be successful, he said, is if “you know the regulations better than the Army itself.”

“If you’re serious about your request, do not give up,” DiPietro said. “I don’t care what they do, or what they say, do not stand down. If you know you’re right, the regulations will — it may not seem like it — but they will protect you. Stand by your decision.”

But for the soldiers who don’t have a religious reason to apply for an exemption but are thinking about doing so anyway just because they don’t want to shave – of which DiPietro said he’s heard from several — don’t even think about it.

“If you’re trying to fleece the system because you just don’t want to shave, or you just want to grow your hair out, I’m telling you now: It’s not gonna work.”