The Army’s next infantry assault buggy might be a classic ‘G.I. Joe’ battlewagon

The Army has been on the hunt for a lightweight battlewagon to ferry infantry squads around the battlefield since September 2018. Now, two defense contractors are teaming up on a G.I. Joe-inspired vehicle to get the job done 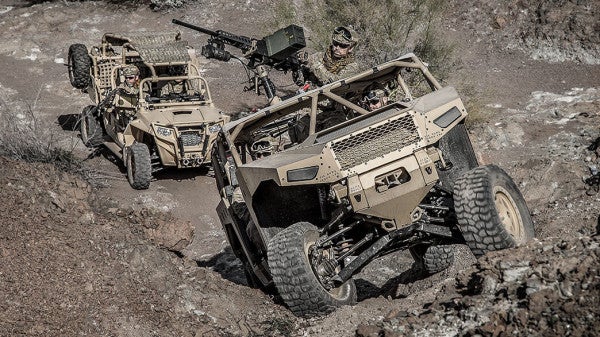 The Army has been on the hunt for a lightweight battlewagon to ferry infantry squads around the battlefield
since September 2018. Now, two defense contractors are teaming up on a G.I. Joe-inspired vehicle to get the job done.

Polaris and Science Applications International Corporation (SAIC) announced on Thursday that the two firms are officially collaborating on an offering for the Army's Infantry Squad Vehicle, an air-droppable tactical vehicle intended to provide 9-member squads with enhanced mobility over the Humvee or Joint Light Tactical Vehicle.

While the Army plans on acquiring 651 ISVs by 2024 through a regular industry competition,
per Jane's 360, Polaris has been on officials's radar since the service fielded a batch of Deployable Advanced Ground Off-Road (DAGOR) vehicles to the 82nd Airborne for testing and evaluation.

If this muscular-looking war wagon looks eerily familiar, it's not just because you've been spending too much time reading
The War Zone: the DAGOR bears an uncanny resemblance to a Vehicle: Attack: Multi Purpose (or V.A.M.P.) variant operated by the f*cking G.I. Joes in the titular toyline's fictional universe.

I mean, take a look for yourself:

On the one hand, the DAGOR's clearly an improvement over the VAMP, especially since the former has a payload capacity of 4,000 pounds and the latter is a non-existent vehicle from a fictional fighting force.

On the other, the whole search might be moot: this past March, Army officials stated the service “has more capability than we need” with its exiting inventory of 800 ISVs and 55,000 Humvees, so there's that.

But consider this: G.I. Joe
may not have been an effective recruiting device during the Vietnam era, but it clearly inspired at least a handful of the engineers who design modern war machines. It's like the Joes always say:
pork chop sandwiches!