When CBS announced that it picked up The Code in 2018, the network clearly thought it had the next JAG on its hands. Instead, it got an unmitigated disaster 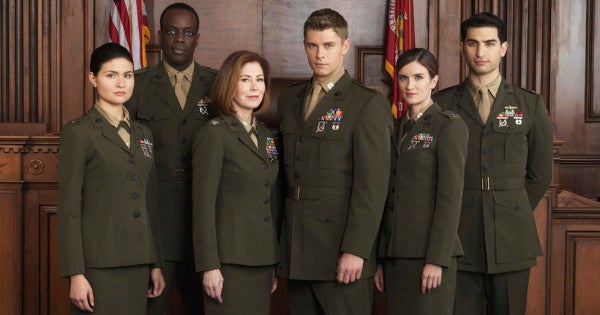 When CBS announced that it picked up The Code in 2018, the network clearly thought it had the next JAG on its hands. Instead, it got a disaster of a production that was cancelled after just one season.

The military courtroom drama — developed by Craig Sweeny and Craig Turk and starring Luke Mitchell, Dana Delaney, and Anna Wood — was billed as a gritty look at “the military's brightest minds take on our country's toughest challenges – inside the courtroom and out.”

But over its first season, the series failed to cultivate a dedicated audience, lagged in network ratings, and, perhaps more importantly, pissed off an online army of U.S. military veterans incensed by the series' inaccuracies.

This could have been at least partially avoided, according to several sources, if Sweeny and Turk hadn't outright rejected the Marine Corps' help at every turn.

This account is based on conversations with two Marine Corps officials and a source at CBS Entertainment with knowledge of the interactions between the The Code team and the Corps. All three spoke on condition of anonymity out of fear of reprisal.

The extended trailer for 'The Code'

After learning that CBS has started production on The Code in 2018, Marine Corps officials at the Entertainment Media Liaison Office made several offers to provide production assistance for the series, from furnishing the production with equipment and personnel to fine-tuning daily scripts. This is not an irregular request: officials, for example, spot-check episodes of NCIS weekly for inaccuracies.

But all of the Corps' offers were rebuffed by the show's production team, officials with CBS and the Marine Corps said.

“[The Corps] offered multiple times to help, offered up assistance at every opportunity,” said one Marine. “The show-runners blew them off every time.”

And it showed: when CBS first previewed the show on social media in early March, U.S. military veterans quickly pointed out a series of glaringly obvious errors, from inconsistent ribbons and non-regulation haircuts. In the pilot episode alone, a Navy O-5 appears at his court-martial in the uniform of an O-3. The mistakes were exacerbated by both cringe-inducing marketing material on The Code's social media accounts; they even spawn a dedicated Twitter account dedicated to “tweeting what The Code on CBS would really be like if it had any shred of authenticity.”

Boot: Somebody new to the unit, or somebody fresh out of, or still in, boot camp. #TheCode pic.twitter.com/jpXY3tmHkZ

While The Code became a target of veterans' ire, it failed to gain traction. The show's audience plummeted from 8.13 million U.S. viewers for the pilot episode to 4.45 million by the second. When the finale aired on July 22, only 2.91 million households tuned in, giving the series a 0.3/2 ratings/share (that is, 0.3% of all U.S. TV viewers and 2% of viewers watching during the series' time slot) in the 18-to-49 set.

This wasn't merely a function of uniform mistakes. Despite the success of JAG before it, the critical consensus on the The Code was that it was simply another crime procedural that ” little to differentiate itself in a crowded field,” per Rotten Tomatoes.

But to the two Marines sources who spoke to Task & Purpose, this failure was an unforced error — after all, it's not like Corps officials hadn't gone above and beyond to lend to the production.

Indeed, one overture even came at the behest of then-Commandant Gen. Robert Neller, who offered a CBS executive and cast members from The Code who were in attendance at the 2018 Marine Corps Birthday Ball a “mini boot camp” that would have included a mock version of officer candidates school, weapons training, and a leadership reaction course.

But when officials in the Entertainment Media Liaison Office attempted to contact show-runners Sweeney and Turk regarding Neller's office, they were “essentially told to f-ck off,” said another Marine official.

When Task & Purpose asked the Marine Cops Entertainment Media Liaison Office for comment, an unnamed public affairs official flatly told Task & Purpose, “we didn't work on that” before hanging up.

Representatives for Sweeny, Turk, and CBS Entertainment did not respond to multiple requests for comment.

To be clear, a lack of official input from the U.S. military isn't necessarily a recipe for disaster.

For The Code, CBS hired Timbermann/Beverly Productions, the production company behind the relatively-accurateSEAL Team. As with that production, the company brought on retired Sgt. Maj. James Dever as its military technical advisor, an experienced Hollywood consultant whose 1 Force Inc. has worked on everything from The A-Team to American Sniper.

Despite this, both Marine officials indicated to Task & Purpose that Dever's feedback went completely ignored by show-runners. Dever declined to comment.

This isn't totally surprising: technical advisors are essential, but ” can't just go in and make changes to the script,” as Marine veteran (and current 1 Force Inc. employee) Matt Morgan previously wrote for Task & Purpose. “His notes instead have to be negotiated between the director and a handful of producers, and just as it was with the costume designer, the champions of accuracy don't always win.”

But what was surprising about The Code, according to sources, was the sheer level of resistance to input on matters of Marine Corps culture and protocol that Sweeny and Turk telegraphed.

“There's never been difficulty with other productions like this,” said one Marine official. “The production company should have sought out the Corps' expertise because the most important thing was to get it right.”

In March, the Corps finally got an unexpected chance to provide feedback. After Marine veterans flamed the living bejesus out of the series' hilariously bad trailer on social media, according to one source, a producer on The Code apparently contacted Marine officials about potentially premiering the series on a Marine Corps base.

Understandably, Entertainment Media Liaison Office officials refused unless it could review the show's scripts. As a result, they managed to cut several scenes a Marine Corps source described as “egregiously offensive.”

But that last-minute intervention wasn't enough to save The Code, which saw its ratings crater following its early April premiere. In July, CBS announced that it did not plan on reviewing the series for another season.

It is notoriously difficult to produce a piece of entertainment that perfectly captures the nuance of U.S. military culture: after all, even big-budget Hollywood productions have budget constraints. But if the brief, embarrassing life of The Code can offer a lesson to others, it's that you at least have to try.