"I come back to March Back every year because I love to run." 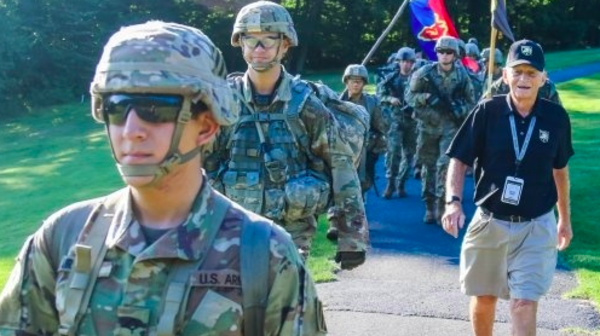 “I come back to March Back every year because I love to run,” Ward said in an Army press release. “I've participated in 10 marathons and one ultramarathon that was 62 miles. I have been running and walking all my life so when they said they wanted people to hike back with the plebes I thought that was a great opportunity since I love being outside running and walking.”

Ward said he knew he wanted to go to West Point after seeing the school — “this great fortress over the Hudson River,” he said — while at a track meet when he was in high school. After high school, he wasn't immediately accepted into the academy so he enlisted in the Army in 1951. He got into the school later, as a prior service cadet.

Per the Army's release, Ward retired as a lieutenant colonel in 1979, and started participating in the March Back 20 years ago at age 67.

He loves to spend the time with new class talking and giving them advice on the year ahead of them, but says he always tells them, “Cut it off, wait until we get to the top of the hill. Then we can resume the conversation.”

Ward hasn't decided yet if he'll come back for the next March Back, saying he'd have to “think about it.” But he's already earned the title of oldest graduate to take part in the tradition, and put weaker plebes to shame.