In late May, 16 female cadets in their fourth year at the U.S. Military Academy at West Point gathered in... 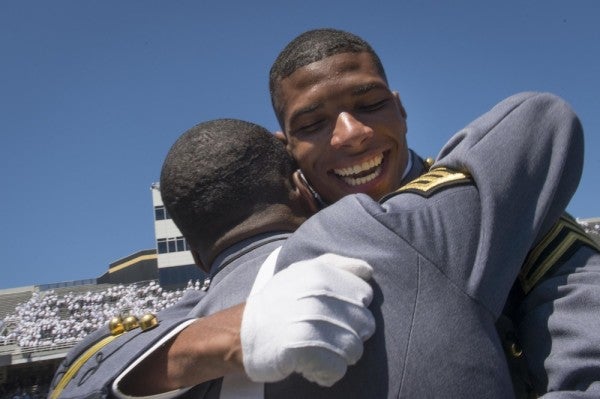 In late May, 16 female cadets in their fourth year at the U.S. Military Academy at West Point gathered in their grey dress uniforms, complete with crossed sabres, for an “old corps” photo — a tradition among those graduating. In a show of pride and solidarity, these women raised their fists and a photo was snapped. The problem? These 16 women are black, and as the photo went viral, a narrative developed that these women had intended to align themselves with the “Black Lives Matter” movement.

After an Army investigation, West Point recognized that the race of the students, paired with their raised fists, does not a public political statement make, and the cadets were cleared of any wrongdoing.

The dismissal, however, came with a public warning from the academy superintendent: Because of their skin color, these cadets should “understand that a symbol or gesture that one group of people may find harmless may offend others. As Army officers, we are not afforded the luxury of a lack of awareness of how we are perceived.”

As the military strives to bolster diversity, growing national tensions spurred by race and politics are infiltrating the military’s ranks, even as it tries to remain apolitical. Therefore, how can the service academies continue to promote racial diversity while subverting the ethnic identities of their recruits?

Across the country, many colleges and universities seeking to promote diversity among students turn to affirmative action. At West Point, as with the other service academies, diversity is a goal, but because of the military’s rigorous standards, the traditional use of affirmative action cannot necessarily be the means used to achieve it.

Traditionally, affirmative action establishes specific race and gender opportunities to ensure that minority students or workers are given a fair shot in the admissions process. Supporters find that affirmative action levels the playing field, because minorities experience hardships that make educational pursuits more trying. Opponents of this process suggest that schools, in order fill minority quotas, end up choosing students of lower academic standings because of their ethnic background, thus eliminating the merit-based system that should be in place instead.

However, some publications like the Wall Street Journal and the New York Times wrote lengthy reports in 2003 that affirmative action has been embraced by the service academies for decades.

On the use of affirmative action former West Point superintendent Gen. Dan Christman told the Wall Street Journal, “You can't have increasingly black and Hispanic enlisted ranks, and not have black officers, lieutenants, captains and generals.”

Still, among service academies, admissions qualifications must be met regardless of race. They not only include the need for high academic standings, but also consistent displays of leadership and the ability to meet physical fitness standards, Lt. Col. Timothy Viles, Deputy director for the West Point’s Admissions Department told Task & Purpose in an interview.

He added that while West Point does use race as a determinant in its appointment process, it doesn’t in any way negate the need for cadets to have comparable standings among their peers of any other race, religion, or gender.

“I wouldn’t say that affirmative action plays a role in the appointment process,” Viles said. “We fill our classes with the best young men and women from across our nation, focused on really maximizing diversity and talent across all domains.”

For example, the class of 2016 just graduated roughly 1,150 cadet candidates, including more than 322 minorities, 15 international cadets, and 35 combat veterans. And last year’s incoming class, which will graduate in 2019, is the most diverse most in the academy’s 214-year history. But the service academy — moreover, the Army officer corps — still has room for improvement in terms of promoting diversity, according to Viles.

“Our challenge in promoting diversity is making the public aware of the outstanding men and women, who on a daily basis, are out there sacrificing for our nation,” he added.

Viles suggested the best recruitment tool that West Point has at its disposal is the current cadets, whose diverse stories inspire people from all walks of life to aspire to the levels of greatness that a service academy can offer.

Moreover, the military at-large has taken up a charge to inspire diversification among all its ranks. This year alone, the Defense Department opened all combat positions to women, and also lifted the ban on transgender troops.

Still, the officer corps is far behind matching the enlisted numbers. Among the total minority force serving, officers account for only 12.9% while the enlisted make up the other 87.1%.

According to Mary Tobin, a 2003 graduate and Iraq War veteran, however, West Point has come a long way even in the last 15 or so years.

An outspoken advocate for the girls in the “raised-fist” photo, Tobin, who is African-American, has had an intimate understanding of West Point’s diversification efforts since 1998. As a West Point alumna now working to recruit diverse candidates, she is helping to shape the future of the officer corps and improving the processes it uses to do so.

But before she attended, West Point’s minority outreach efforts were minimal at best.

At 18, Tobin hadn’t considered applying to a service academy in high school. She added that she only learned of West Point when a retired lieutenant colonel who taught ROTC at her school encouraged her to look into it.

Of her experience, and others in heavily minority communities, Tobin said, “It’s not that we weren’t prepared or didn’t have the grades, we didn’t know.”

In terms of current affirmative action, Tobin told Task & Purpose, it’s less about admitting students just based on ethnic quotas, and more about making the force as elite as possible. And that means diversity. One of the biggest diversification efforts is not found in special treatment for minorities, but instead in building stronger outreach to minority communities.

“In terms of recruiting numbers, there are percentage targets,” she added.

In fact, there is a minority admissions office under the admissions office. Minority officers at West Point are now assigned to reach out to students living in minority-dense populations to reach ethnic percentage goals.

The standard for cadets who are offered West Point appointments, however, is in no way lowered by the academy’s need to meet those percentage targets. In fact, according to Tobin, minority inclusion, as with the inclusion of female officers, only makes the corps stronger, because the varying life experiences add necessary perspectives that would be absent from a predominantly white, male officer corps.

And as for the “raised fist” photo, Tobin added, “I’m pleased with the ruling .”

But, she said, in terms of reconciling being a minority and being an officer, much debate is still to come.

“What is being discussed currently is that perception can rule out impact versus intent,” Tobin said. “Perception, because you are not of the majority, can lead people to jump to conclusions.”

Because of the high racial tensions outside the military, minorities serving and even veterans who have separated, have to be very cautious of how they are perceived by the American public. Moreover, the service academies and the military at-large will continue to be under harsh scrutiny in a way they have not been at any other time in history. Essentially, the military is no longer insulated from problems plaguing the civilian world.

“I’ve never before seen where the American public could influence that level of investigation within West Point, based off of perception.”

For Tobin, the feat of subverting her ethnic identity in order to avoid creating outward perceptions was not easy.

But West Point, as well as the other service academies, runs into an issue when it can recruit students based on ethnicity or sex, but once a cadet is appointed, he or she must only identify in the Army as “green.”

She added that at West Point specifically, they don’t tell cadets how to manage their ethnicities, and what often happens, is that they instead set aside their personal feelings in service of the military in a way that the majority does not.