The U.S. Military Academy’s star quarterback, Ahmad Bradshaw, was investigated in 2014 after he was accused of raping a female... 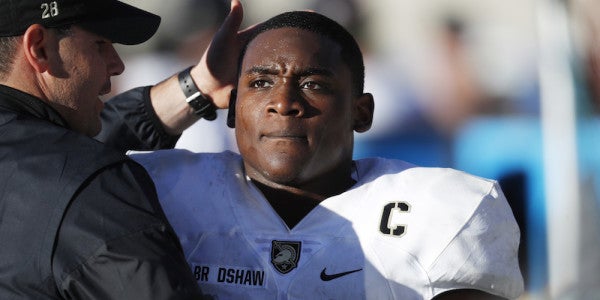 The U.S. Military Academy’s star quarterback, Ahmad Bradshaw, was investigated in 2014 after he was accused of raping a female cadet at West Point, according to internal documents reviewed by The Daily Beast on Friday. On Saturday, Dec. 9, the academy released a statement saying the allegations “were unfounded and the case was closed.”

Bradshaw was also found in serious violation of the Military Academy’s exacting honor code in May 2016 after a “failure to properly cite in an academic course,” Academy representatives told The Daily Beast. Honor violations usually translate to expulsion for cadets; those who are retained are typically barred from representing West Point on athletic teams.

In September 2014, Cadet Madeline Lewis accused Bradshaw of raping her after she returned to her barracks room from a shower, the Daily Beast first reported on Dec. 8.

An internal U.S. Military Academy investigation determined that “a consensual sexual relationship between the cadets had occurred”; a second subsequent investigation, conducted by the Army Criminal Investigation Division, turned up “insufficient evidence” for the service to bring rape charges against Bradshaw, according to the Daily Beast. He was instead charged with violating West Point’s Cadet Disciplinary Code for “sexual activity, which includes, but is not limited to: kissing, hand holding, and fondling,” in the barracks.

Bradshaw denied that the two had any sexual relationship at all when speaking to investigators and never gave an official statement. Lewis was forced to do “hours” — typically a repetitive marching punishment, but due to her knee injury, she was instead isolated in detention.

Following the encounter, Lewis — whose grandfather is Capt. Dennis Lewis Sr., an Army Ranger and legendary West Point football player — claims that she was scrutinized and ostracized by West Point, telling the Daily Beast that she filed a formal complaint against Bradshaw after her roommate “told on her for having sex in the barracks” and was subjected to an “invasive” rape kit and placed on suicide watch by medical personnel at the Keller Army Community Hospital in West Point. She ended up leaving the academy after her fall semester, unable to tolerate the torrent of harassment and abuse from fellow cadets, who dubbed her “the whore of the corps” on the anonymous messaging app Yik Yak. The Army quarterback, on the other hand, is set to start at the Army-Navy game in Philadelphia on Dec. 9, the most important game on Army’s annual schedule.

In 2016, Bradshaw violated West Point's honor code by cheating on coursework. Although Bradshaw’s honor violation was handed down in November 2016, he wasn’t suspended from the football team until the following February, after he’d led Army to an unexpected victory over Navy in December. Bradshaw was reinstated to the team in August 2017 — just in time Army’s first game of the new football season against Fordham. The Black Knights won, 64-6. (West Point told the Daily Beast that the timing of Bradshaw’s punishment and football suspension “followed the typical timeline for other cases that year and no special consideration was given to Cadet Bradshaw.”)

Bradshaw’s time at West Point has had the makings of an American sports legend. A talented athlete in high school, Bradshaw quickly blossomed into a powerful football star, setting records as the Army’s all-time single-season rushing leader. Last year, after more than a decade of defeat at the hands of the Midshipmen, the Black Knights finally broke Navy’s winning streak with a victory that coach Monken largely attributed to Bradshaw’s performance, calling him “the perfect quarterback for our football team” in a Chicago Tribune profile.

In addition to the assault allegations and the honor violation, internal West Point documents reviewed by The Daily Beast indicate that between 2014 and 2017, Bradshaw racked up multiple honor violations and at least 15 negative observation reports out lodged by both Army officers and fellow cadets.

Bradshaw’s spotty record also raises questions into the nature of his brief off-season benching by the Black Knights this year. The New York Times wrote in a profile, pegged to tomorrow’s Army/Navy game, that Bradshaw “almost walked away” from the academy and football in 2016. “He has some administrative stuff for something on campus,” Monken told the Times Herald-Record of Bradshaw’s absence at the start of the season, in August 2016. “There’s things, especially with the start of school, just stuff you can’t control.”

The Daily Beast report marks the second serious allegation against a Black Knights football player in as many years. In July 2016, Tyler Lampe was arrested and charged with raping an unconscious woman in her West Chester, Pennsylvania, apartment the previous March. His trial date is set to begin Dec. 11, according to Chester County Court documents.

A March 2017 Department of Defense report on sexual assault and harassment at U.S. military academies during the 2015-2016 school year found that the number of reports at West Point jumped to a decade high, from 17 between 2014 and 2015 to 26 between 2015 and 2016. A full 46% of female cadets reported experiencing some form of sexual harassment during their time at West Point.

“The U.S. Military Academy takes all allegations of criminal conduct seriously and thoroughly investigates alleged criminal activity,” West Point said in a statement provided to The Daily Beast. “We also respect the privacy and rights of those accused and victims of crimes. The investigation concluded that there was no probable cause to believe that the alleged offenses occurred and has been closed.”

UPDATE: This article was updated to incorporate a statement from the United States Military Academy on the rape allegations made against Bradshaw (12/13/17; 4:06 p.m.)