“It made me really uncomfortable, and that was exactly what it’s intended to do.” 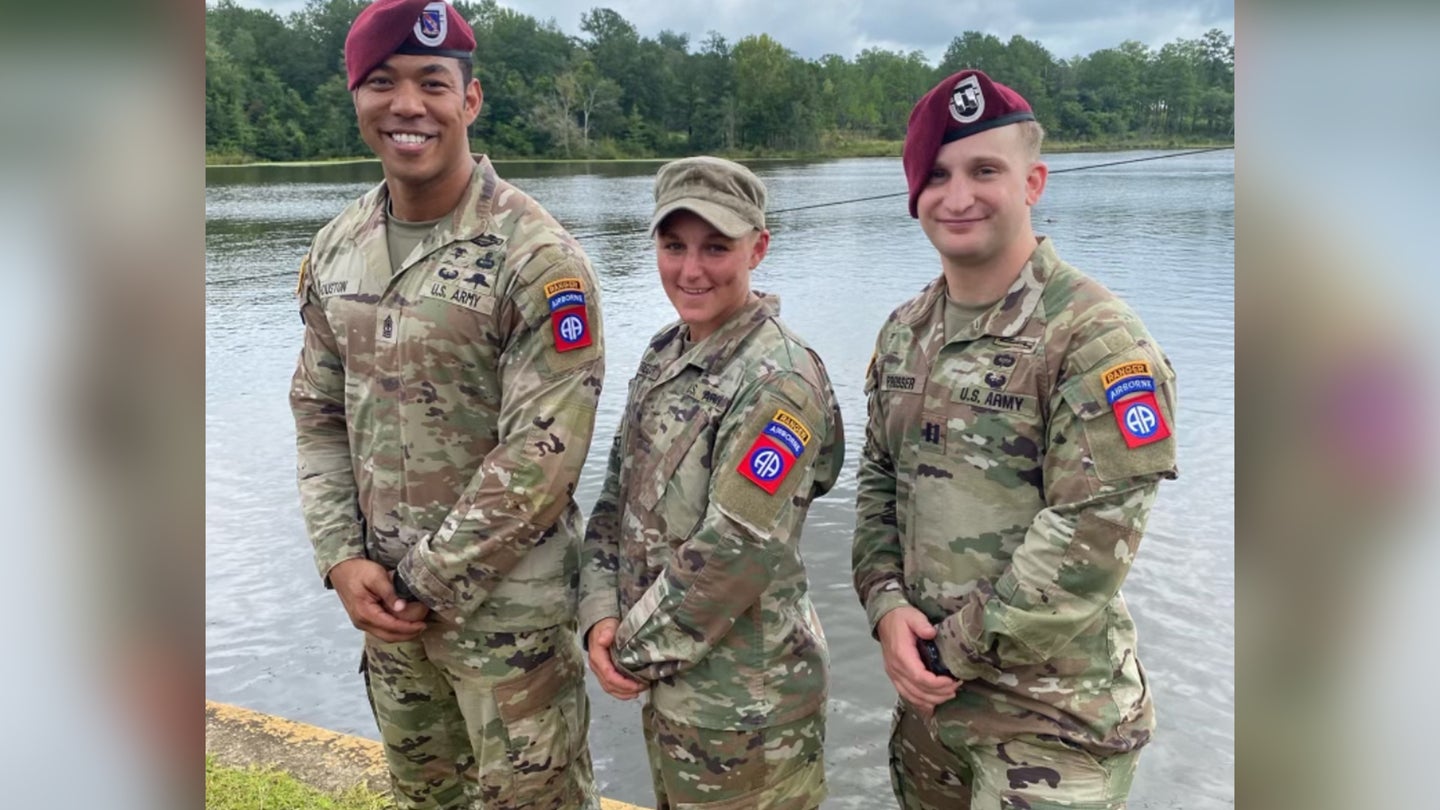 It’s not totally uncommon to have a career change in your 20s. Maybe you realize the field you got a degree in isn’t what you expected. Perhaps you find something that pays way better. Or maybe you realize that while coaching college sports is fantastic, wouldn’t it be great to become a Ranger-qualified Army infantry officer? 1st Lt. Brianna Strecker knows the feeling.

Strecker was a West Point women’s softball coach when she realized she’d be crazy not to at least see what a life in uniform would be like. After being around soldiers and athletes for three years, she’d learned enough about the Army to know she wanted to try. And it wasn’t enough just to join. Strecker ultimately went into the infantry, joined the 82nd Airborne Division and became airborne qualified, and then went off to the ultra-grueling Ranger School, which she completed just last week.

“It helped me grow a lot,” Strecker said of joining the Army. “It helped me learn a lot. It challenged me in new ways. It made me really uncomfortable, and that was exactly what it’s intended to do.”

As a college student herself, Strecker played softball and was studying criminal justice. She was planning to pursue a career in that field when one of her mentors urged her to become a coach, telling her she’d be “doing the coaching profession a disservice” if she didn’t at least try, Strecker recalled. So she joined the same coaching staff that she’d been mentored by as a player and after a year was up, she moved on to coach at Tufts University.

Her players at Tufts had an undefeated season, she told Task & Purpose, and she stayed on for two years before beginning to look for more full-time jobs in coaching. Strecker said she absolutely loved the leadership potential that coaching brought, and was offered a head coaching job in West Virginia when she saw a job opening at the U.S. Military Academy at West Point.

“I had seen one of the other West Point coaches out recruiting a bunch of times,” she recalled. “And I remember just thinking in my head, having 100 questions, being like, ‘A military academy? What does that entail?’ And I was so intrigued. I think standards, discipline, all those things have always been a huge part of my coaching philosophy as well, so I was really drawn to the idea of a military academy.”

Before she’d even applied for the West Point job — an assistant coaching position — she turned down the head coach offer. The rest, as they say, is history.

The moment she stepped onto campus in 2016, Strecker said she “fell in love with all of it.” As someone with very little knowledge of the military, she had a lot to learn. But it “was the opportunity of a lifetime” and she was all-in, not just on coaching but on the recruiting requirements for the job as well. Over the three years she spent at West Point, she said she worked to learn as much as possible so she could help recruit future Army officers to the academy. And by doing so, she realized more and more that it would have been a great path for her if only she’d known about it.

“I was just like, this is incredible, and I kept thinking ‘man, I wish I had known about this,’ or I had more knowledge about this when I was making my own decisions as a college athlete,” Strecker said.

Apparently, she wasn’t the only one who saw the potential, and a mentor at West Point told her about Officer Candidate School. Before long she’d applied and been accepted, and in September 2019 she was off to basic training at Fort Jackson, South Carolina. And as if basic training isn’t challenging enough, she was 28 years old and entering the Army under different circumstances than most. She had her own home, her own life, and a full-time career, which she uprooted in exchange for training alongside teenagers and young adults almost a decade younger than her.

“It was the hardest decision I ever had to make because I really love coaching more than anything else in the world,” she said. “And the whole reason I love it is because I had such a strong passion for leadership. And I think West Point, being the preeminent leadership institution in the country, just opened my eyes up to that even more. It was like oh, there’s a whole other level of leadership here.”

Basic training was uncomfortable, there’s no doubt about that, but Strecker knew that was the point. Just speaking to her, it’s clear she’s someone who thrives in those situations. She said it helped her grow in new ways she hadn’t experienced and was exactly the challenge she was looking for. Not to mention that she had a great support system, to the point where it was “almost embarrassing” how many letters she received at basic from former athletes and their families.

And while she hadn’t yet branched as an officer, she said her drill sergeants — who selected her as the soldier of the cycle — always made comments to her about going infantry. While enlisted soldiers go into specific military occupational specialties, or MOS’, officers “branch” into career fields like infantry, armor, aviation, or cyber. But having Strecker go into the infantry field seemed obvious to her drill sergeants with the way she led and performed physically and mentally. Her instructors at officer candidate school were no different, and when it came time to rank her branch choices, infantry was at the very top.

That would have been accomplishment enough, going from someone with zero military background to joining the infantry as a new Army officer. But it wasn’t enough for Strecker. She knew if she went into the infantry, she would push herself to go to Ranger School, an elite Army training course and one of the most grueling in the military. Not because the Army demanded it, but because she refused to not push herself to the limit.

“The majority of the people I’m leading are men,” she said. “So I think I knew that if that was a choice I was making, and I think as a leader in general, you have to do the hardest stuff possible if you expect the people working below you or your subordinates to do the hardest stuff possible. I would never have my guys do anything that I was not willing to do myself. And I think that for me was just a non-negotiable.”

That drive carried her through the intensive 61-day course she started in May, which takes soldiers to their physical and mental limits and then pushes them just a little further. Through the three phases of the course, Benning Phase, Mountain Phase, and Florida Phase, the soldiers are tested on their physical stamina and mental toughness. They’re tested on their ability to plan and execute combat patrol missions; waterborne operations; climbing and rappelling; land navigation; and basic battle drills.

According to the Army, only 50% of Ranger students finish the first phase of training. Strecker was one of them.

The hardest part, she said, was functioning “at a really high level with no sleep and no food.” And you’re not just being graded by instructors, but by your peers as well, so there are “no off moments.” Especially as a woman in the course, Strecker said she worked that much harder to ensure there was never a doubt she could do this just as well as the men around her.

“My squad would always joke with me that I would carry too much because I never wanted to be judged for not carrying enough, or not pulling my weight,” Strecker said. “And so if there was something heavy or there was a weapon system that needed to be carried, I wanted to be the one to carry it because I never wanted there to be a reason that somebody would be like, ‘Well, she graduated but she didn’t really pull her weight,’ or, ‘she wasn’t really an asset.’ So every day I reminded myself: If you’re not an asset you’re a liability.”

That’s not to say there weren’t “what the hell am I doing here?” moments. Strecker joked that she would be surprised if someone didn’t have a moment like that during Ranger School. But she was close with her team and they helped push each other through. One of the most important lessons she learned from that training, she said, was the idea that if you’re a good teammate and show up for others, people will show up for you, too.

While Strecker got through the first two phases of Ranger School on the first try, she had to recycle on the Florida Phase and do it a second time to complete it. While it’s not uncommon for soldiers to do so, Strecker said it was “super challenging for me, mentally,” because she was so determined to finish. But even that ended up being an opportunity for growth that she was grateful for in the end.

“It challenged me in new ways,” she said, “but I also think I was a far better leader in my second Florida phase than I was in my first Florida phase. And I actually wouldn’t have changed it for anything because I think I took way more out of that phase than I did the first time through.”

When she finally finished just last week, Strecker said she was thrilled. Throughout the course she never really thought about graduating, she kept her eyes solely on the next task, the next day, the next objective. She still is, in fact. Strecker says she’s now considering pushing herself even further and going to the Army Sapper School. She took part in the branch detail program, which allowed her to join both the infantry and engineering branches, she said. But that will come later, or at least when she gets her “body back to its physical stamina that it was before Ranger School.”

For now, Strecker said she’s just excited to be back with her unit at Fort Bragg, North Carolina, so she can bring what she learned during Ranger School to her platoon.

“I’ve been gone and I just want them to know like, I’m here, and I’m ready and I’m excited to start working with them,” she said. “The people in my company, the other leadership …. And my squad leaders and my joes, they’ve been so supportive and so awesome. So I’m just really excited to get back and get to work with them.”