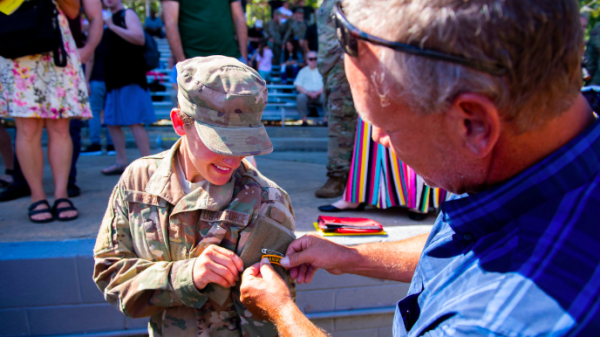 She joins around 300 other airmen who have done the same since the Army began getting accepting airmen into the school in 1955, according an Air Force press release.

“Ranger School is truly not for the weak or faint of heart,” Lt. Col. Walter Sorensen, the Ranger-qualified chief of training at the Air Force Security Forces Center, said in the release. “It speaks well of all those who persevere to find that inner grit and motivation to push through all that Ranger school throws at them.”

“The perspective tabbed Airmen earn serves them well when the mission gets challenging and others look to them to find a way,” he added.

Hibsch is a former enlisted Airman who previously served with the 374th Security Forces Squadron at Yokota Air Base, Japan.

In the Air Force statement, Hibsch called the RAC an “unmatched learning experience on leadership,” adding that it was helpful for Ranger school because it gives potential candidates an “understanding of how you function when you're hungry, tired, wet, cold, and worse, then you have to lead a team of individuals feeling the exact same way.”

Hibsch will now move to the 821st Contingency Response Squadron at Travis Air Force Base, where she will serve as a flight commander.